Blood moon 2018: Everything you need to know to see it - Metro US
Things to Do

Blood moon 2018: Everything you need to know to see it If you’re a fan of all things celestial, this month really is the prime time for you thanks to lunar events that bookend this month: a supermoon that ushered in the new year and the blood moon 2018, which will happen at the close of January.

Before you go all woo-woo and worry about how apocalyptic the event sounds, you should know that the blood moon 2018 is actually a very special event. The moon that night will be not only a blood moon — don’t worry, we’re getting to what exactly this is soon — but also a blue moon and a supermoon. That’s right, it’s a super blue blood moon. We’ll break each of those down.

What is a blood moon, exactly?

A blood moon is just another way to describe a total lunar eclipse, and though you could wait until the blood moon 2018 to see exactly why, we’ll explain. Blood moons get their horror story-sounding name from the fact that they often appear reddish. More specifically, they’re just an example of a total lunar eclipse, which is when the moon falls entirely within the shadow of the Earth.

Why does it look darker?

NASA has a very scientific not-at-all scary explanation for the crimson or copper hue you might see that night. Simply put: the color comes from the way white sunlight is absorbed and scattered around the Earth’s atmosphere. The Sun, Earth and moon all line up in that order during a blood moon. But that means there’s a shadow where no sunlight makes it around the Earth, and it’s just large enough to cover all of the moon in the night sky. Areas on either side of this shadow are a bit darkened, where some sunlight is bent around the Earth’s atmosphere. All of that means that the moon will appear to us as if it darkens as it travels across the night sky, until it’s at its darkest when it’s aligned perfectly in the shadow of the Earth.

Why does it look red?

Then there’s that red color. The white sunlight comes around the edges of the Earth, where it’s filtered by the atmosphere. The blue colors within the white light are filtered out, and then the remainder of the light is refracted onto the moon by our atmosphere, leaving the eery red tones you’ll see in the sky. It’s that simple, but the effect is dramatic.

OK, so what is a blue moon? And how can it be a blue moon if it’s also a blood moon and looks red?

Simple problem of nicknames. No, the moon won’t appear both red and blue. While the blood moon 2018 will appear reddish to some degree, the name “blue moon” is simply another way to refer to the second full moon that happens within one month. The first this month was the supermoon that ushered in the new year, making the blood moon 2018 the second of January 2018.

What is a supermoon?

Yep, the blood moon 2018 is also a supermoon. We have a full primer on what is a supermoon if you want to know how it happens and how frequently. What it means very quickly for you as an observer of the night sky is that the moon will appear larger on the night of the blood moon 2018, although experts disagree on whether the difference in size is big enough for you to actually notice.

How rare is it? When was the last super blue blood moon?

Catch the blood moon 2018 on the night of Wednesday, January 31 heading into the morning of Thursday, February 1. The moon will technically be the closest to the Earth (making it a supermoon) the night before, on Tuesday, January 30, but it seems like the experts are OK with considering this close enough to be a super blue blood moon anyway. 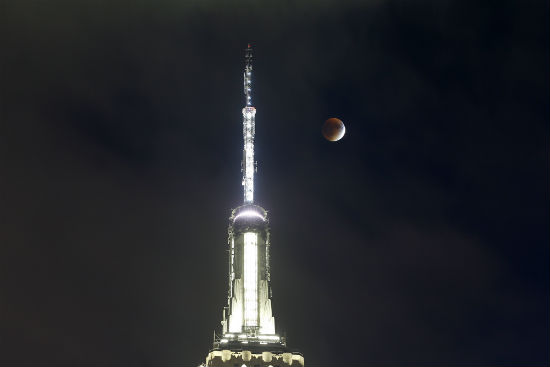 New Yorkers, you’re actually going to want to wake up early on Wednesday, January 31 in order to catch the super blue blood moon at 6:48 a.m. EST, which is when the moon will enter the shadow of the Earth and take on this copper color. You only have a 16 minute window, though, as the moon sets shortly after changing color on the East coast.

If you want to know the best time to catch the blood moon 2018 in your area, Space.com has broken down a viewing guide by area so everyone can enjoy the super blue blood moon.