Brazil’s Guedes says real poised to rise, would be ‘great’ if dollar fell – Metro US
Economy

Brazil’s Guedes says real poised to rise, would be ‘great’ if dollar fell 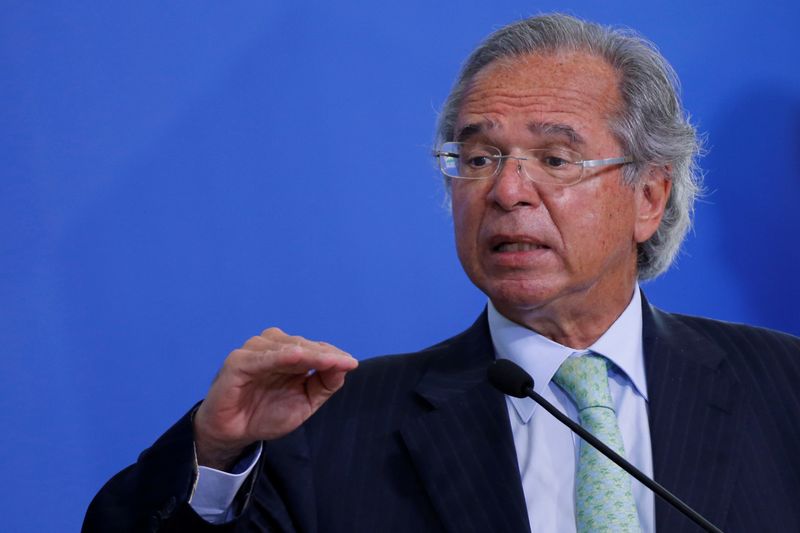 FILE PHOTO: Brazil’s Economy Minister Paulo Guedes speaks during a ceremony to launch a program to expand access to credit at the Planalto Palace in Brasilia

BRASILIA (Reuters) – Brazil’s real is poised to strengthen against the U.S. dollar, as the country emerges from the “difficult and turbulent” phase that has contributed to its recent weakness, Economy Minister Paulo Guedes said on Tuesday.

“This is normal, the dollar has gone up a little bit now. But the (trade) surplus is very strong, the dollar is going to start to fall. This is normal,” Guedes said in congressional testimony when asked about the real’s devaluation, adding that it would be “great” if the dollar fell.

The real lost almost 30% of its value last year as Brazilian interest rates were slashed to a record low 2% in response to the COVID-19-induced recession. It fell a further 10% earlier this year as a deadly second wave hit and investors fretted over the fiscal outlook.

The real has recovered recently and last week traded at 5.34 per dollar, its strongest since early February.

According to Guedes, the equilibrium dollar rate “is not as high as it is now” but uncertainties surrounding the virus, the economy and the government’s reform agenda – even his own future – have contributed to the real’s weakness.

Guedes said last month that the real has overshot to the downside, and its equilibrium level is probably around 4.50 per dollar.

Guedes told lawmakers that a “sense of mission” and “obligation” have kept him in the job and giving his all, even though there has been no shortage of people saying he does not need the stress that goes with it.

Earlier in his testimony, Guedes said the government is considering a new program to help informal workers that are not receiving government payments during the COVID-19 pandemic.