By Sharon Abratique and Pak Yiu
comments
Posted on June 25, 2021 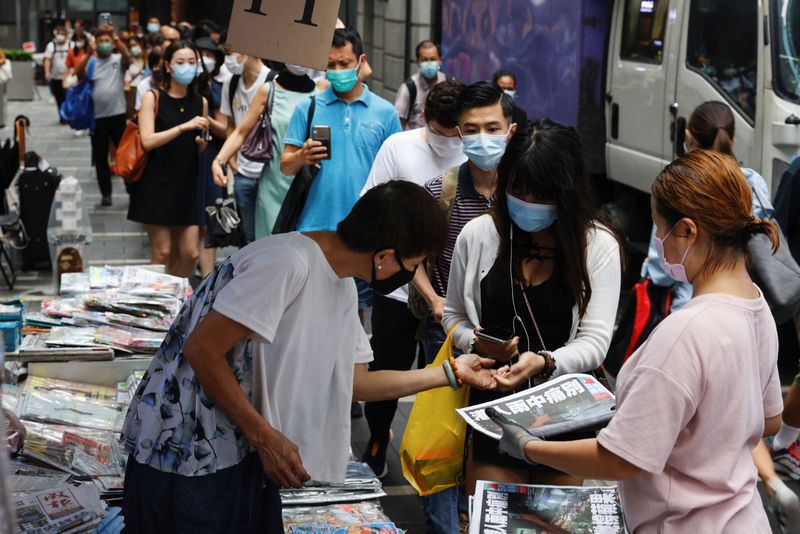 People queue to buy copies of the final edition of Apple Daily, published by Next Digital, in the Central financial district, in Hong Kong

Also on Friday, China approved the promotions of two officials in a move that critics said would further tighten Beijing’s grip.

secretary – the first time a security specialist has taken the number two position in the territory since its handover from British to Chinese rule in 1997.

Biden said on Thursday that Apple Daily’s demise was a “sad day for media freedom”. Other foreign officials also expressed concern that it represented a further stifling of freedoms in Hong Kong, a trade gateway and international financial center.

Apple Daily had been a thorn in Beijing’s side, mixing pro-democracy discourse with celebrity gossip and investigations of those in power. It was forced to end a 26-year run after authorities froze the company’s funds.

Its closure follows the imposition of a national security law last year in response to huge pro-democracy protests in 2019.

Hundreds of loyal readers lined up at newsstands across the city to buy last editions.

“I hope reporters can stay true to their faith and keep working hard,” said Tse, 60, a former medical worker, as she queued for a paper.

Biden called on Beijing to stop targeting the independent press and to release detained journalists and media executives.

“People in Hong Kong have the right to freedom of the press. Instead, Beijing is denying basic liberties and assaulting Hong Kong’s autonomy and democratic institutions,” he said.

Apple Daily had been “a much-needed bastion of independent journalism in Hong Kong,” Biden said in a statement.

“Through arrests, threats, and forcing through a National Security Law that penalizes free speech, Beijing has insisted on wielding its power to suppress independent media and silence dissenting views,” he said, vowing continued U.S. support for the people of Hong Kong.

Officials in Hong Kong and China have repeatedly said media freedoms are respected but not absolute, and cannot endanger national security.

The shutdown deals the most serious blow yet to Hong Kong’s media freedoms and could potentially destroy the city’s reputation as a media hub, advocacy groups say.

Speaking to the 2021 Society of Publishers in Asia press awards ceremony held in Hong Kong, Bachelet said the security law was leading journalists to self-censor to avoid clashing with “vaguely formulated offences”.

Lai has been in jail since December over unauthorized rallies during the pro-democracy protests. He is facing three national security charges, including colluding with a foreign country and is already serving several sentences for taking part in unauthorized rallies.

British foreign minister Dominic Raab called on China to respect its commitments to free media under an agreement with Britain over how Hong Kong would be ruled after 1997.

In anticipation of big demand for its final print run, the Apple Daily printed one million copies, or more than 10 times its usual. Some staff expressed anger and frustration.

“(After) today, there is no press freedom in Hong Kong,” said Dickson Ng, 51, a designer at the paper. “I feel very disappointed and angry.”

Five executives were arrested, and two – chief editor Ryan Law and Cheung Kim-hung – were charged with conspiracy to commit collusion with a foreign country and denied bail. On Wednesday, a columnist for the paper was arrested under the security law.

Known for his hawkish stance, Lee had spearheaded the city’s

disciplinary forces, including the police, in the crackdown that has seen mass arrests of democratic activists and politicians.

“The promotion of John Lee and Chris Tang completes the

swift and total transformation of Hong Kong into a police