When you think of David Byrne, you generally don’t associate such a singular and ambitious artist as being someone who eases into their mornings. But, as the man told me over the phone, he likes to take his time in bed before facing each day.

“I’ll have the beginnings of breakfast, like a grapefruit and coffee, in bed while I read the newspapers and maybe answer a few emails,” the instantly recognizable voice proclaimed on the other end of the line. “I kind of start off that way and then I’ll get up and start doing things — probably make a real breakfast and all of that kind of stuff. I’ll wake up early, but I’ll work in bed for about an hour.”

I caught up with the former Talking Heads singer-songwriter, author, and champion of creativity to discuss his upcoming “David Byrne’s American Utopia” residency on Broadway that will bring his recent highly successful and acclaimed tour to the Hudson Theater for 16 weeks starting on Oct. 4.

“I thought, there’s a fair number of people who I think might really like this show but wouldn’t initially go see it in the places where we would normally play,” – David Byrne 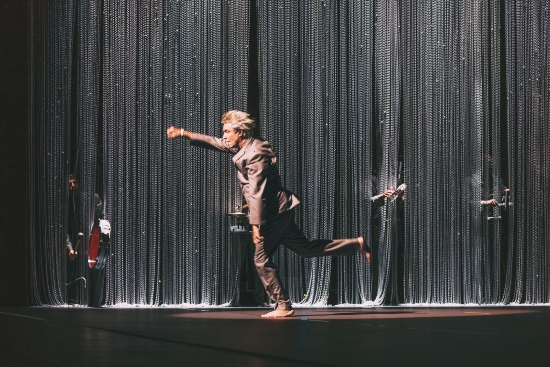 Your new Broadway show, “American Utopia,” is an extension of your past tour. What made you decide to give this show a temporary home on Broadway instead of letting that tour exist for what it was?

David Byrne: It wasn’t my idea to do a Broadway show. It came from Broadway people — producers and people like that — who saw the show and said, “This needs to go to Broadway.” They planted the seed in my head. But for me, I thought it would be interesting. Here’s a challenge. This will be a very different kind of audience that comes with a different set of expectations and baggage and things like that. It’s not going to be a typical concert audience, so we will have to adjust the show accordingly. So in the process, we would reach a different audience. An audience that may not come to Forest Hills or King’s Theater in Brooklyn. There’s plenty of those. Some of them are friends of mine, who … they just don’t go to “music” concerts like that. But, they’ll go to Broadway. I thought, there’s a fair number of people who I think might really like this show but wouldn’t initially go see it in the places where we would normally play. Then, also, there’s the challenge of adapting it a little bit.

What are some of those challenges? Does it feel different now that you are clocking into a temporary office with this show?

David Byrne: It’s a more intimate setting than what we’re used to so we have to adjust our performance appropriately. To do that, some of our rather big, huge gestures are scaled down a little bit and have to be more precise. But the big change for me, I sensed when we were doing the concert tour that there was kind of an underlying narrative that was emerging in the show. I thought, for Broadway, this would be the opportunity to bring that out a little more. That’s what I’ve been doing. There are a few little more talking bits that help connect the dots and help the audience see what I think is inherent in the show.

One thing that both this new live show and the “Stop Making Sense” concert film have in common is that you show the audience where every piece of sound is coming from in a deconstructed way. It helps to heighten the experience by combining both the audio and the visual. Do you find beauty in letting the audience in on the secret in that way?

David Byrne: Yeah! I think it’s counterintuitive, when you let people in on the secret, it’s like an illusion or something like that. It doesn’t spoil the trick. In fact, it sometimes kind of even deepens it. Because the music has the same effect on people even when you show them how it’s done. It’s not like, “Oh, you’ve spoiled it now.”

It also creates a sense of community, right?

David Byrne: Yes, that’s a big part for me. That people witness the community of the band and it becomes more evident when everything gets stripped away. It becomes more apparent.

You could say you are doing a similar effort with your “Reasons to Be Cheerful” online magazine where you wanted a safe haven for people to start at a neutral zone before hearing the terrible news of the day. Did you have a final straw before wanting to do something positive?

David Byrne: I don’t know what the final straw was. But it was probably two, maybe three years ago now that I started collecting things that gave me a little bit of hope. I thought, “Oh look, maybe things aren’t totally going to hell?” There are counter-things that are being created across the world and are succeeding. Maybe as a kind of self-therapy, I thought “Okay, I have to remember that.” Because reading all of the headlines is going to get me really depressed and turn me into a cynical cranky person. I thought, I don’t want that to happen. Let’s start putting things out because maybe other people need to hear this stuff, too. They’re probably feeling the same way that I am.

This is the first project of your new Non-profit, The Aributus Project, that you intend to offer a “re-imagining the world through projects that inspire and educate”. Could you tell me about some other projects you will be working on?

David Byrne: There’s another project. It looks like we’re going to do it in Denver. It’s kind of an immersive science theatre project. They all actually connect in different ways! In certain ways, this “American Utopia” show, part of it is about identity and asking about who we are and how we relate to the world. The science thing does that to, in a very different way of course. These threads connect into different things even though they seem very different.

I’m curious about how you approach and what gets you excited about creating. Do you find you are a one-track-minded artist or that you need to constantly be doing a million things at once?

David Byrne: I find that inevitably one has to have different irons in the fire. Like right now, I’m really primarily focused on this show. But, there are talks and discussions and emails about this and that. And, some things just take longer to come to fruition and you can’t rush them.  So, focusing all of your energy and attention on one thing doesn’t make it go any faster [laughs]. It’s better to let that take its time and keep checking in and moving it ahead as much as you can in whatever way it wants to go. I find I end up keeping a few things simmering.

Are there plans for a new album? Are you assembling new songs at the moment?

David Byrne: Nope. I have some songs, but I don’t have any plans yet. That is a thing where when I get back to New York, I’ll probably go into the studio in small increments and try to advance that stuff further along.

You have always been a champion of new music and the arts and, as a longtime fan, you have really engaged me as an active listener with your recommendations. Do you have any recommendations of artists that are currently exciting you on a creative level?

David Byrne: Ah, there’s plenty! I met Tierra Whack at the Afropunk Festival a couple of weeks ago. She’s someone who’s work I admire. There’s someone!

For more information on tickets, head to americanutopiabroadway.com.