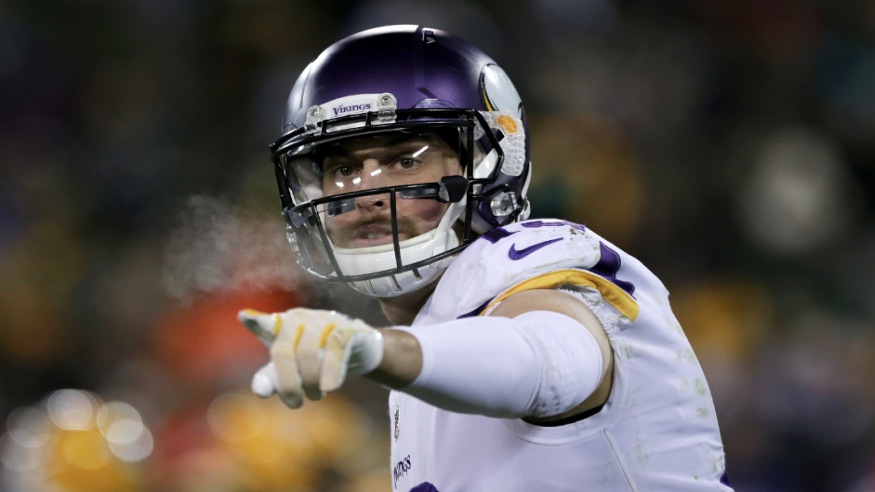 Were on to another loaded 12-game slate on DraftKings in Week 5! Below are some potential targets at WR, TE and D/ST. You can play DraftKings right now by clicking on this link.

With all the RBs to pay up for that I covered in my previous article, we’re going to need to save some salary at WR. Fortunately, there’s plenty of value at the position this week.

Let’s start with the studs, though. There are two obvious plays in the Falcons vs. Steelers game, which currently carries a 57.5-point projection. Antonio Brown ($9,100) and Julio Jones ($8,500) will both be doing some heavy lifting for their respective teams in this one. While AB is off to a slow start and Julio has a whopping 502 yards without a touchdown, both are in spots that give them as high a ceiling as they’ll have all season. I prefer paying down for Jones here, who’s known for playing better on the road.

The other name that sticks out here is Adam Thielen ($7,700) — who’s eye-popping 56 targets through four weeks has him on pace for the most in a season all-time. He’s parlayed those targets into a 40-473-2 line and a 27 DK-point average, and now faces a Philly defense that ranks just 25th against WRs.

There’s almost too much value at WR, so I’ll stick to highlighting my favorites. Marvin Jones ($4,700) is down $1,500 since the beggining of the season and faces a Green Bay defense he’s historically roasted. Averaging 26.2 DK points against the Packers in his last four outings, Jones is the top value on the board here.

Tyler Boyd ($5,600) has been steadily climbing in salary, but remains underpriced. This is an elite fantasy WR this season, as he’s out there are virtually every passing down. Boyd is averaging close to 25 DK points the last three weeks, and gave us an 11-100-0 line of 15 targets last week. Boyd will continue to rise.

I mentioned how cheap Russell Wilson ($5,100) is when I touched on QBs in my other article, and the same goes for his WRs. The Rams defense it talented, but was shredded by the Vikings last week. The Seahawks should be throwing the ball a lot if game script holds, which means Doug Baldwin ($5,000) and Tyler Lockett ($4,600) are both viable options.

I also gave a lot of love to the Jaguars this week, who will be tasked with keeping up with a talented Chiefs offense. It makes it easier to do when you consider how poor Kansas City’s defense is. Dede Westbrook ($4,700) has been emerging as a go-to-guy in this offense, and checks in at an extremely affordable salary.

Taywan Taylor ($4,000) checks in as the cheapest value play this week. Rishard Matthews was cut by the Titans prior to Week 4, and Taylor saw a huge boost in opportunity. He was on the field more and targeted nine times, catching seven for 77 yards. His role should continue to expand against a terrible Bills defense.

Tight end is an extremely thin position these days, and it doesn’t help that Rob Gronkowski, Eric Ebron and Jordan Reed are all off the main slate. My favorite option here is Jared Cook ($4,800), who had another monster game for the Raiders in Week 4. He posted an 8-110-2 line against the Browns, seeing 13 targets overall. This was his second 30-DK point game of the season, and he’s had a floor of eight points, which is solid (not to mention a couple touchdowns called back). Cooks is a very safe play with a high ceiling against a poor Chargers defense.

Behind Cook, Travis Kelce ($6,000) is the stud to target. His salary comes down due to the matchup with Jacksonville, but he’s topped 20 DK points in three straight games and the Chiefs know how to get him the ball in creative ways. Kelce makes for a good play this week if you want to pay up at TE.

Defense/Special Teams — I’m going to be honest, I don’t see much I like at the D/ST spot so far this week. It’s a weird slate in the sense there’s so many more good plays than usual at the other positions, but there’s no elite defense that stands out.

Titans D/ST ($4,000) has a matchup with the Bills, and the Packers were able to scored 23 DK points in this very matchup last week. They’re my favorite defense, but $4,000 is a lot to pay for them on the road. If I want to pay down for value, my favorite play would be Jets D/ST ($2,600). The Broncos just aren’t very good, and will be on the road in this one. Again, I don’t love either of these plays, but they look like the best options at the moment. Hopefully something changes that gives us an elite play come Sunday. Check back for my article on Sunday for updates.

Don’t hesitate to reach out with any questions on Twitter: @julianedlow