Does smoking cause acne? – Metro US
Health

Does smoking cause acne? It’s probably not surprising that smoking wreaks havoc on your health (and skin) thanks to all the tar and chemicals inside each stick. But does smoking cause acne?

Many tend to think that all of those health problems come decades — and thousands of cigarettes — down the road. But maybe that’s not the case.

Smoker’s acne, or acne that comes directly from smoking a cigarette, has been studied extensively over the years and some studies seem to support a correlation between the two. A 2009 study by researchers at San Gallicano Dermatological Institute in Rome found that non-smokers were more likely than smokers to develop inflammatory cystic acne — those large, red and painful bumps that either sit below the skin or erupt into visible pus-filled bumps

But that doesn’t mean the answer to does smoking cause acne is a hard no. Smokers were more apt to develop post-adolescent acne that doesn’t result in inflamed pimples, but rather skin-colored bumps (called comedones) and blackheads, especially on the cheeks. Research also showed that smoking reduces vitamin E on the skin, an antioxidant vitamin that helps prevent breakouts.

And according to the researchers, study participants who smoked were more likely than non-smokers to have acne at the time of the research — 42 percent of smokers vs. 18 percent of non-smokers. So does smoking cause acne? This study sure points to yes.

Does smoking cause acne or does nicotine prevent acne?

Another study published in the journal Clinical and Experimental Dermatology found that of the people studied, just under 20 percent of male smokers had acne — far below the 34.5 percent estimate taken from national statistics. Of the females, only 12.1 percent of smokers had acne, compared to the almost 33 percent they expected. 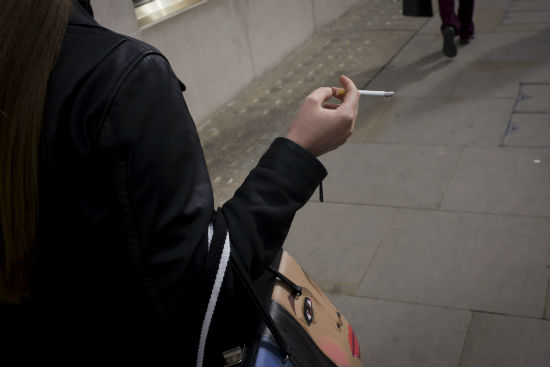 This, according to the researchers, supports the hypothesis that something in cigarettes, like nicotine, is anti-inflammatory against acne.

Does smoking affect your skin in other ways?

According to the Mayo Clinic, the nicotine in cigarettes causes the blood vessels in the outer layers of the skin to narrow, blocking proper blood flow and the delivery of important nutrients like oxygen and vitamin A. Also, the other 4,000 chemicals found in cigarettes is also shown to have a negative impact on the collagen and elastin in your skin, leading to less elasticity and, eventually, wrinkles.

You’ll also likely experience wrinkles around your mouth from the constant pursing to smoke — and it’s even known to make the skin on your inner arms more wrinkly.

And then there’s all the internal problems that smoking causes, like lung cancer, that result in 480,000 premature deaths a year.

So, does smoking cause acne? There’s no definitive answer from science (yet), but smoking does play a huge role in the overall health of your skin — and your body in general.