Every GoT cast member with a Game of Thrones tattoo It’s been over a year since we last visited Westeros — figuratively that is (or, rather, through the eyes of our beloved GoT characters). The cast appears just as attached to the George RR Martin-created world as fans are, and many of them have a Game of Thrones tattoo to prove it.

The final chapter, Game of Thrones season 8, won’t debut until 2019. It’s when we’ll finally get to see the great battle between the army of the dead and, presumably, everyone in the North (plus, so it seems, Jaime Lannister; minus his power-hungry sister/lover Cersei). They’ll need all the dragonglass they can get because, according to HBO executives, it’s supposed to be bloody and full of unwanted death.

Another battle to look out for? One that involves Jon Snow and Daenerys when they find out they’re related, which may or may not affect their budding romance.

In admiration of their Emmy-winning world of dragons, booze and brave souls, a number of cast members have marked themselves with a Game of Thrones tattoo.

Nikolaj Coster-Waldau, who plays Jaime, trolled fans by posting an Instagram after the 2018 Emmys that included fake ink of his brother on the show, Tyrion, portrayed by Peter Dinklage.

“What a wonderful evening ending with an amazing surprise win for our show. Was nominated which meant I finally got to bring my love to the mad ess [sic],” he wrote, adding, “And today I got a tattoo.”

What a wonderful evening ending with an amazing surprise win for our show. Was nominated which meant I finally got to bring my love to the mad ess. And today I got a tattoo 🙂 #gameofthrones

Other members of GoT, however, have permanent ink inspired by Westeros.

GoT cast with a Game of Thrones tattoo

These, unlike Coster-Waldau’s, are real GoT tattoos.

Williams revealed a “No one” tattoo in July, which pays homage to Arya’s time spent with the Faceless Man of Braavos.

Here’s a screenshot of the Game of Thrones tattoo from her Instagram: 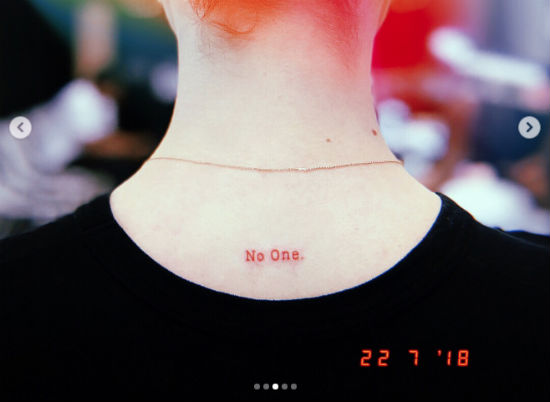 The ink, just below the base of her neck, is etched in red.

First tattoo back home! Thank you so much for getting this from me @sophiet ! ? bad ass !

Fans immediately thought Turner’s Game of Thrones tattoo implied that the entire Stark family (or, what remains of it) makes it out of season 8 alive. But she denied these claims.

“While I was getting it done, people advised me not to because it looked like I was giving everything away, but I wasn’t. It’s just a quote from last season,” Turner said on James Corden’s The Late Late Show. “Everyone figures that the pack really does survive, but it’s just a moral that I like to live by.”

E! News reports that Turner and Williams got matching peach-colored tattoos back in 2016 that read “07.08.09.” This is the exact date (August 7, 2009 in Eurpoean formatting) they found out they were cast in GoT.

It’s only fitting that Clarke would get a tattoo featuring three dragons — she is the Mother of Dragons after all.

The ink, she wrote on Instagram, is so she never forgets her “babies.”

Kit Harington, who plays the King in the North, reportedly said he wants matching ink with the entire cast to commemorate their time together. Ok, Jon Snow — make it happen.

Or, perhaps Coster-Waldau should bite the bullet and get Tyrion Lannister permanently inked on his arm. Now that would be a Game of Thrones tattoo gone too far.

Not that our opinion should stop him. As the Lannisters’ late father, Tywin, says on the show, “A lion does not concern himself with the opinion of sheep.”