The ketogenic, or keto, diet doesn’t sound like the normal diet. It requires you to eat a lot of fats, which isn’t exactly what you’d expect out of something that’s supposed to help you lose weight. But 51-year-old (ageless) Halle Berry swears by it, and so do famous faces like Megan Fox, Vanessa Hudgens and crunchy-granola-but-glam Kourtney Kardashian. What is the keto diet, exactly? We break it down for you — because Berry and her sister celebs definitely are a testament to its positive effects.

What is the keto diet?

What is the keto diet trend? Prepare yourselves for this one. The keto diet is low in carbs, moderate in protein and high in fat.

Pamela Nisevich Bede, R.D., a dietitian with EAS Sports Nutrition, told Shape.com, “You’re taking carbohydrates out of the equation, and the body kind of pauses and says, ‘Okay, I don’t have any sugar. What am I supposed to run off of?'” This is were fats come in, and protein intake, Bede said, is moderate because the body converts excess protein into carbs.

The website Keto Dash explained, “When you eat something that is high in carbs (that yummy donut), your body will produce glucose and insulin. … The problem with this is that when glucose is used as a primary energy source, fats are not needed for energy and therefore are stored.”

When you lower your carb intake, though, “the body begins to look for an alternative energy source” found in ketones, which are produced by the liver when you “starve” your body of carbs. This is known as being in ketosis — burning fat as opposed to glucose found in carbs (insulin, which transports glucose around the body, is also lowered).

So, what is the keto diet? It makes you a fat-burning machine.

On the keto diet, you should be obtaining 75 percent of your calories from fat, 20 percent from protein, and 5 percent from carbs, relates Shape.com. Bede told the site that as far as carbs go, you shouldn’t be having more than 50 grams per day (one sweet potato, Shape.com noted, has about half that). These numbers are a big shift because, Bede said, “Usually 50 to 65 percent of our calories come from carbohydrates.”

Tip: You can tap on any circle and filter foods by that macro ? #keto #ketodiet #ketodietapp pic.twitter.com/ERJiPYwzLe

You can track your intake with apps like KetoDiet, Keto Diet Tracker and Carb Manager.

The keto diet will help you lose weight, control blood sugar and, according to Keto Dash, it also increases energy levels and mental focus and helps to clear skin and curb appetite. To learn more, click through to the Keto Dash site.

What can I eat on the keto diet?

Bede told Shape.com that a day of keto meals can look like the following:

Steak topped with onions, mushrooms and spinach sautéed in butter and coconut oil 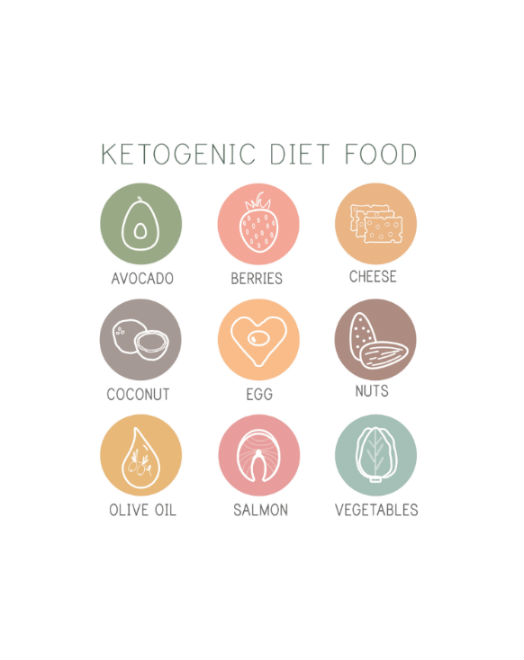 Warnings about the keto diet

When you drastically remove carbs from your diet, you can get what is known as the “keto flu.”

“That’s when the headaches, fatigue [cramps] and loss of concentration comes,” Bede said. She stressed the importance of staying hydrated via Pedialyte, electrolyte tablets or beef and chicken broth.

Keto Dash noted that the keto flu usually only lasts a few days, but that loading up on electrolytes will ensure the discomfort doesn’t last longer.

People who should not use the keto diet

Everyday Health reports that women who are pregnant or breast-feeding should not try the keto diet. Also, people who have kidney damage, who are prone to heart disease and those with type 1 diabetes should not follow the keto diet due to the risk of low blood sugar. Also, those who have had their gallbladder removed should avoid it because of the high-fat intake.

Men’s Journal reports that weight lighters should not use the keto diet because of the low intake of carbs, which prove to be a vital part of a lifter’s recovery process. You won’t have as much fuel to get through workouts, and an expert tells the site that if considering the keto diet, heavy lifters should avoid a drastic cut in carbs — instead, cutting down your carb intake to 10 – 20 percent as opposed to 5 percent is ideal.

What Halle Berry has to say about the keto diet

“I don’t really eat pasta, anything with sugar, it’s very much meat-based,” Berry, who’s diabetic, said in an exclusive interview with PEOPLE last Thursday. “I eat meat, I enjoy chicken and beef and a lot of vegetables.”

Berry wrote in a January Instagram that she believes keto has been “largely responsible” for slowing down her aging process. So, what is the keto diet? Basically, it’s magic.

#FitnessFriday Today let’s talk about food. I think the most important part of being healthy and in great shape largely depends on what and when you eat. Being diabetic most of my life, I have always had to take food very seriously. So for years, I have been following the keto or ketogenic diet. I hate the word “diet” so while you’ll see the word diet, just know I encourage you to think of it as a lifestyle change NOT A DIET! Keto is a very low-carb food plan which actually forces your body to burn fat like crazy. I also believe it’s been largely responsible for slowing down my aging process. The keto lifestyle offers so many benefits such as weight loss, (moms that’s how we get rid of our baby bellies), appetite control, more energy and better mental performance. If you’re like me, you can possibly reverse type 2 diabetes, you’ll experience better physical endurance, better skin and also less acne if that’s an issue. And it even helps control migraines! I’m sharing two links (check Stories!) that will explain the lifestyle in detail and it also offers a plan to help you get started! So today I encourage you to say yes to keto, give it a try… what do you have to lose?! ?? #FitnessFridayHB