Following President Donald Trump’s inauguration in 2017, hundreds of thousands of protestors took to the streets around the country for the Women’s March. Now, two years since, activists are ready to take action again at the 2019 Women’s March on New York City this weekend.

This year, though, there are two separate New York City Women’s March events after questions over inclusivity have fractured the movement nationwide.

National Women’s March leadership in Washington has come under fire after accusations of anti-Semitism stemming from ties between Women’s March co-president Tamika Mallory and Louis Farrakhan, the Nation of Islam leader who has a reputation of anti-Semitic remarks. Both Women’s Marches are set for Saturday, Jan. 19. 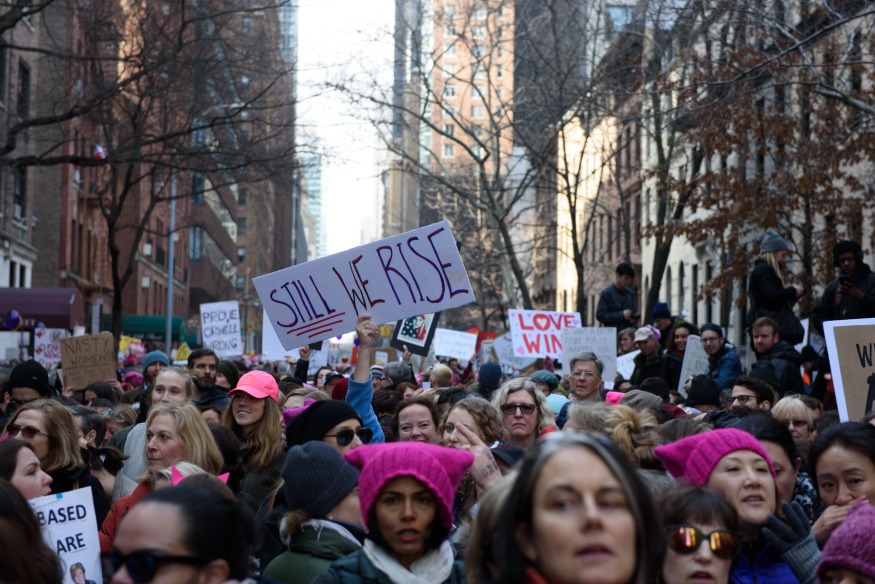 Rabbi Ammiel Hirsch, senior rabbi of Stephen Wise Free Synagogue in the Upper West Side, said in a sermon on Friday that the synagogue was disassociating from the Washington faction.

“This January 19th, Stephen Wise Free Synagogue will be joining the Women’s March On NYC, to show our unyielding support for women’s rights the best way we know how. However, we are disassociating from Women’s March Inc., the national entity that coordinated the 2017 and 2018 marches – and will host the upcoming 2019 march – on Washington, D.C.,” he said.

“We are not disassociating from the original goals of Women’s March,” Hirsch continued. “To the contrary, we are joining other progressive organizations that have also been critical of Women’s March Inc. and share the same concerns we have: that its current leadership has distorted the values and thwarted the goals articulated on that amazing January day in 2017.”

Though the two groups reportedly discussed merging, they could not reach a consensus and so there will be two 2019 Women’s Marches in New York City. Here’s what you need to know about the events.

The New York City chapter of the national Women’s March does not actually have a parade permit to march, so it’s holding a Women’s Unity Rally.

Attendees will meet at 10 a.m. on Saturday, Jan. 9 at Foley Square in downtown Manhattan. That event will go until 2 p.m., according to its event page, and is a partnership between the Women’s March NYC and the New York Immigration Coalition. The NYPD will issue a sound permit to the New York Immigration Coalition “for amplified sound for a stationary rally in Foley Square.”

The Women’s March on New York City 2019 officially kicks off between 11 and 11:15. The route will go south around Columbus Circle, east onto 59th Street and then turn south onto 6th Ave to end at 44th Street and 6th.

The NYPD has approved a parade permit for the Women’s March Alliance. Parade permits are granted to “the first applicant, or in the case of annual events, to the historical applicant,” according to the department.

The NYPD will be doing “soft checks,” according to the Women’s March Alliance, so the organization is discouraging marchers from bringing large bags, though they are allowed.

However, attendees should come prepared with water, homemade posters made of paper, poster board or cardboard, though wooden poles or sticks are prohibited (instead, the organizers suggest using holiday wrapping paper rolls as sign handles).

This weekend won’t be the ideal New York City weather for marching outside, but the cause doesn’t care if you’re cold. No matter what march you head to, make sure to bundle up.

Temperatures on Saturday could hit a high of just 35 degrees and though the day seems like it will be mostly sunny, according to the National Weather Service, there is a chance of snow early Saturday afternoon.

Plus, the Non-March for Disabled Women

There is a third event in New York City on Saturday cosponsored by Women’s March NYC (the local chapter of the national movement) and Rise and Resist, an action group formed in response to the 2016 election.

Called the Non-March for Disabled Women, this event “was formed out of the need to highlight the concerns of disabled women and trans and non-binary folk.” In solidarity with the Foley Square march, this event goes from 2 to 4 p.m. on Jan. 19 and will be located at the clock in Grand Central Station.