GOP leader imagines Kelly, Mattis plan to tackle Trump if he ‘lunges for the nuclear football’ - Metro US
Donald Trump

GOP leader imagines Kelly, Mattis plan to tackle Trump if he ‘lunges for the nuclear football’ With concerns about President Trump’s mental state growing on both sides of the aisle, New York magazine writer Gabriel Sherman said a GOP power player has postulated that the president’s chief of staff and defense secretary have talked about physically restraining him from using the nuclear codes.

“I just want to put into context a conversation I had with a very prominent Republican today, who literally was saying that they imagine Gen. Kelly and Secretary Mattis have had conversations that if Trump lunged for the nuclear football, what would they do?” said Sherman yesterday on “All In With Chris Hayes.”

“Would they tackle him? I mean literally, physically restrain him from putting the country at perilous risk. That is the kind of situation we’re in,” he said.

Hayes asked Sherman to divulge the sources’ relationship to the Trump administration. “These are the conversation they have, on very good authority, are taking place inside the White House,” replied Sherman. 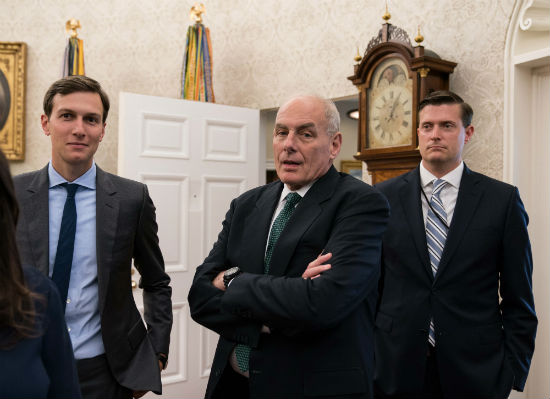 Over the past week, Trump has continued to escalate his rhetoric about North Korea, and administration sources report he is about to pull the U.S. out of the Iran nuclear deal, despite entreaties by his advisors and other world leaders not to do so. “It will show total disrespect for America’s allies,” Wolfgang Ischinger, former German ambassador to the United States, told the New York Times on Wednesday.

Trump is also involved in a Twitter feud with Sen. Bob Corker (R-TN), who said that the Oval Office has become an “adult day care center” and that Trump is setting the U.S. “on the path to World War III.”

This week, Trump did not deny that was his desired route. “We were on the wrong path before,” he said during a White House photo op Tuesday. “All you have to do is take a look. If you look over the last 25 years, through numerous administrations, we were on a path to a very big problem – a problem like this world has never seen.

“We’re on the right path right now, believe me.”