Just as not all heroes wear capes, sometimes a well-placed monocle and fake mustache are all you need to dominate a news cycle.

On Tuesday, numerous Twitter users observed that during a Senate Banking Committee hearing, former Equifax CEO Richard Smith was continuously photobombed during his testimony by a person dressed as “the Monopoly guy,” a.k.a. Rich Uncle Pennybags. The Congressional cosplayer, dressed in a black top hat, occasionally stroked a snowy mustache and raised lens to eye.

On Wednesday, the nonprofit advocacy group Public Citizen claimed responsibility for the stunt, with the Monopoly Man revealed as Public Citizen’s arbitration campaign manager Amanda Werner. “We sent the Monopoly man to the #Equifax hearing to send a message: Forced arbitration gives @Equifax a monopoly over our justice system,” the group wrote on its Twitter account.

They later followed up: “Forced arbitration rip-off clauses give corporations like #Equifax more power than the Monopoly Man could have ever imagined.”

Forced arbitration rip-off clauses give corporations like #Equifax more power than the Monopoly Man could have ever imagined. pic.twitter.com/R3pdT0KBOM

The forced arbitration at issue involves clauses that require consumers to file suit against a company individually, not as a group or class action. Companies who have used the clauses include Equifax and Wells Fargo. 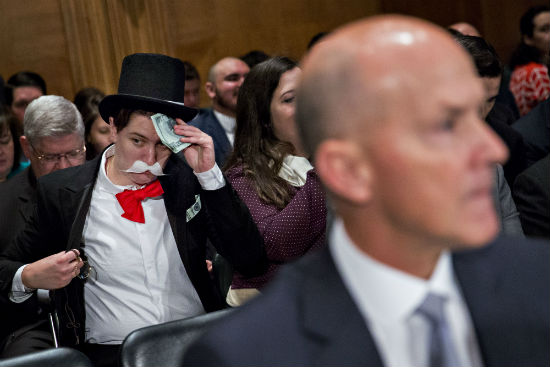 Equifax came under fire earlier this year after it attempted to ameliorate a data breach that exposed the personal data of 145.5 million customers, making them vulnerable to identity theft. The company originally offered free fraud-protection services that included a forced arbitration clause. Smith was before Congress to testify about the breach.

During the hearing, Sen. Elizabeth Warren (D-Mass.) slammed the executive for making “millions of dollars off its own screwup.”

Equifax has otherwise been in the news this week when the IRS awarded a no-bid contract to the company to provide fraud-prevention services.