Like many of us, songwriter Matthew Houck had hit his breaking point with New York. But while many of us choose to wear veils of delusion over our eyes and claim that we could raise a family in our faux-two-bedroom apartments, the longtime frontman of the indie-darling band Phosphorescent decided it was time to leave the city behind and start a new chapter.

“New York is such a difficult city but you do those difficulties because there’s this amazing city! For whatever reason, that balance just seemed … why are we dealing with the struggles when we are unable to tap into the rewards?” — Matthew Houck of Phorsphorescent 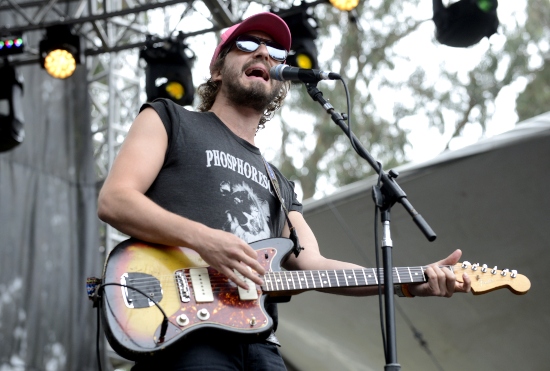 Within the five years following the release of his critically heralded album “Muchacho,” Houck, along with his wife and bandmate Jo Schornikow, decided to make the move down to Nashville to start a family. The couple has since welcomed two children and within that time, Houck went to work on what would become the latest Phosphorescent album, “C’est la Vie,” which was released in October 2018.

“We had been touring so much that we weren’t there all that much,” said Houck of the decision to leave New York. “And when we were there, every time we came back it was like a different city than the one we had left a couple months before. New York is such a difficult city but you do those difficulties because there’s this amazing city! For whatever reason, that balance just seemed … why are we dealing with the struggles when we are unable to tap into the rewards?”

The album was written and recorded in a studio that Houck converted from an old warehouse space in his new city. In the old days, Houck would tend to have his “studio” surrounding where he slept while living in cramped quarters in Brooklyn. But while those lo-fi quality of those older recordings are a thing of the past, that sense of adventure and mad-scientist tinkering is still a part of Houck’s DNA, no matter how successful he has become or the size of the studio.

“To me, the process has not changed except for having access to better tools,” says Houck. “In some ways it’s made it a lot more complicated, especially on this last record. I do feel that each record, at least sonically, sounded better than the one before it. The initial process is still really exactly the same. There’s just a lot more wires [laughs]. Also, this band I have now, some of them I’ve been playing with for quite a few years now. It’s a great resource to be able to  know that I’ve got world-class musicians to holler at when it’s time to bring them in.”

As for the actual songs on the album, the nine songs on “C’est la Vie” find Houck writing from a position of someone taking a long and well-deserved exhale after driving for hours through sheets of pounding rain. It’s a place of contentment, and it suits his trademark style that conjures the feeling of Willie Nelson playing in a futuristic digital saloon. During my phone conversation with Houck, I ask him if he feels settled into his new life down South and if he believes it has shown through in this new batch of songs.

“You must be right, and everyone must be right in what they’re hearing,” he says. “There is something that is more settled about the way this record sounds. To me, the feeling that makes me want to sit down and write songs is a very troubled and strange feeling that I wouldn’t say is settled at all. I still hear the struggle and the searching aspect of these tunes more than the contented [aspect]. Phosphorescent has trafficked in some very rough stuff and emotional territory over the years. I do think that this one is a bit easier on some of that stuff.”

The band will be playing some shows this summer in support of the new album, including one this Thursday at the newly opened outdoor East Williamsburg venue 99 Scott as part of its “Open Air” series. One thing is for certain: Houck hopes to stray from the relentless touring schedule the band had surrounding the release of “Muchacho,” and to get back to recording the follow-up to “Cest la Vie” sooner than later. While that may be the case, he has found having his partner in life as a band member a calming force within the insanity that surrounds being in a band for a living.

“Everything has its pros and cons,” Houck says, regarding playing and touring with Schornikow. “But I know it wouldn’t have been possible to have any sort of stable relationship alone, with kids and all that, if she wasn’t in the band and able to travel. Being on the road all of the time was never conducive to me having any sort of home life.”

Make sure to catch Phosphorescent at 99 Scott this Thursday, July 25.

Check out ‘C’est La Vie’ by Phosphorescent below.