How often should you weigh yourself, anyway? – Metro US
Health

How often should you weigh yourself, anyway? Weighing yourself on a scale — especially after a fun weekend — probably ranks somewhere near the bottom on the “fun things I want to do” chart.

Unfortunately, it’s a necessary evil, given that weighing yourself on a scale can help you track your progress toward losing weight and getting healthier in the new year. But how often should you weigh yourself?

How often you should weigh yourself?

There are two schools of thought when it comes to stepping on the scale: Ignore the scale or weigh yourself every day. Which method should you follow?

The science shows that the latter is the better choice. A yearlong study published in 2017 in the International Journal of Obesity found that, of the 148 mostly female participants, the women who weighed themselves more dropped more weight than the women who didn’t have a daily scale weight.

The women who weighed themselves almost every day over a year not only lost more weight, but also maintained their weight loss longer.

The researchers also found that there was a direct correlation between weight gain and the scale: The longer they went without going on the scale, the more they gained.

The best time of day to weigh yourself

The human body can fluctuate anywhere from five to 10 pounds between all the food and drinks you consume and the activity you do throughout the day.

Unfortunately, most scales can’t distinguish between your actual weight and what’s just a food baby from the massive burrito you ate at lunch. That’s why it’s best to weigh yourself at the same time every day — ideally in the morning after you’ve gone to the bathroom. 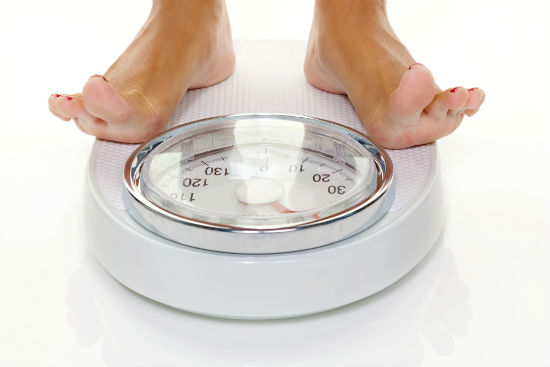 “Make it part of your morning ritual,” says Holly Wyatt, M.D., associate director of the University of Colorado Anschutz Health and Wellness Center, told Consumer Reports. “You need to know that number on a consistent basis to help you manage your weight to make better decisions about your health.”

How you measure your weight on the scale also matters. Scales work best on flat, sturdy surfaces — like a hardwood or tile floor — and stand still with your weight distributed equally across both feet. Leaning forward or back, or on a counter, can alter the reading and make you think you weight more or less than you do.

What if you don’t want to step on the scale every day? Just establish a regular schedule that works for you, like every week or every other week.

Additional ways to measure progress that don’t involve the scale

You can measure your progress in simple ways — like how you feel and how your clothes fit — rather than by what the scale says. Also, measuring your body fat in relation to muscle mass, bones and organs can give you a good indicator of how you’re doing.

Body Mass Index is another way to measure health, but it’s also based on weight — and it continues to be a controversial marker of health.