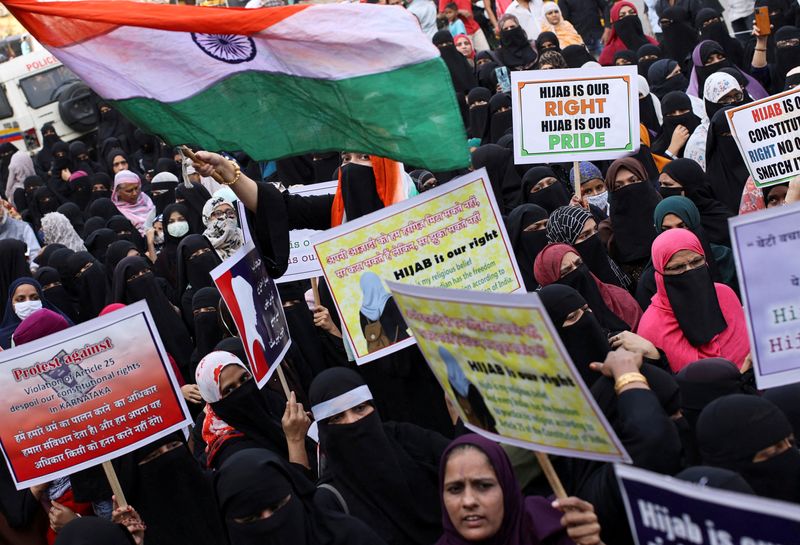 FILE PHOTO: Woman waves the Indian flag as others hold placards during a protest against the recent hijab ban in schools in Karnataka state

UDUPI, India (Reuters) – A series of religious laws promoted by India’s ruling Hindu nationalist party in the southern state of Karnataka, including a ban on the wearing of hijabs, is raising concerns the divisive measures will stoke sectarian tensions more prevalent in the country’s north.

Prime Minister Narendra Modi’s Bharatiya Janata Party (BJP) recently banned wearing the hijab in classrooms in Karnataka, the only one of India’s five southern states it rules. A proposal to make religious conversions largely illegal is being considered by the local legislature.

The moves have become an issue of contention involving India’s Muslim minority. Opposition parties and many political analysts accuse the BJP of fomenting tensions in Karnataka to consolidate its appeal to majority Hindus, like they say it has elsewhere in the country.

Modi’s office did not immediately respond to a request seeking comment.

The BJP has denied that Karnataka’s Feb. 5 hijab ban, a recent bill aimed at mainly preventing conversion of poor Hindus to Christianity and Islam, and a 2021 law prohibiting the slaughter of cows – considered sacred in Hinduism – were designed to pander to the majority community.

“The hijab controversy started as a very localised issue that could have been nipped in its bud”, said Sandeep Shastri, a political scientist who has taught in Karnataka.

“I’m keeping my fingers crossed as to what would be the repercussions of a verdict on the issue,” Shastri added, referring to a petition in the high court seeking to overturn the hijab ban.

“Is it going to further damage the social fabric in the state?”

Karnataka’s capital is the cosmopolitan hub Bengaluru, a city of about 12 million people that is the centre of India’s booming IT industry.

The school ban on the hijab – the traditional covering of the hair and neck worn by Muslim women – fanned protests by some Muslim students and parents around Karnataka earlier in the month. There were some counter protests by Hindu students draped in saffron-coloured shawls, usually worn by Hindus.

There was no violence but such tensions are a hot-button issue in India, where Muslims account for about 13% of the country’s 1.35 billion people. India has experienced several deadly Hindu-Muslim riots since independence in 1947, but hardly any of them in the south.

BJP’s Karnataka spokesperson Ganesh Karnik blamed Muslims for seeking what he called a different identity by insisting on wearing the hijab in class, and said the dispute could unite Hindus.

“They look at every issue as a victim,” said Karnik. “If they take a stand, the Hindu community will also take a stand. Our young girls and boys will be disturbed (thinking) why are they being given a special privilege?”

He said the BJP was confident of retaining power in Karnataka state elections next year and then expanding further in the region.

“We are expanding, we will rule more southern states. If not today, tomorrow, if not tomorrow, the day after,” Karnik said.

In Uttar Pradesh state in the north, home to more than 200 million people and the bellwether of national politics, a long-running dispute between Hindus and Muslims over a religious site has become the central issue in ongoing state elections in which Modi’s BJP is seeking to retain power.

Muzaffar Assadi, a political analyst who teaches at Karnataka’s University of Mysore, said the hijab issue targets youth who would be 18 and eligible to vote in time for next year’s state election and the national election, which is due in 2024.

“They are potential voters, so you just rake up the issue, create a wedge and ultimately you have a base for the next election,” said Assadi.

Muslims say the hijab row is another example of their marginalisation since Modi first took office in 2014 on a platform of good governance and a strong Hindu identity.

Modi has defended his record and says his economic and social policies benefit all Indians.

Analysts and opposition leaders say the vitiated political environment in Karnataka could dent Bengaluru’s appeal as a favoured destination for migrants and expatriates.

“Karnataka is a very diverse state and people have lived here in harmony for long,” said Abdul Majeed, state chief of the Social Democratic Party of India that mainly fights for Muslim causes.

“But electoral politics is threatening communal harmony day by day. In this age of social media, everyone is watching what is happening in Karnataka.”

(Reporting by Krishna N. Das in New Delhi and Sunil Kataria in Udupi)