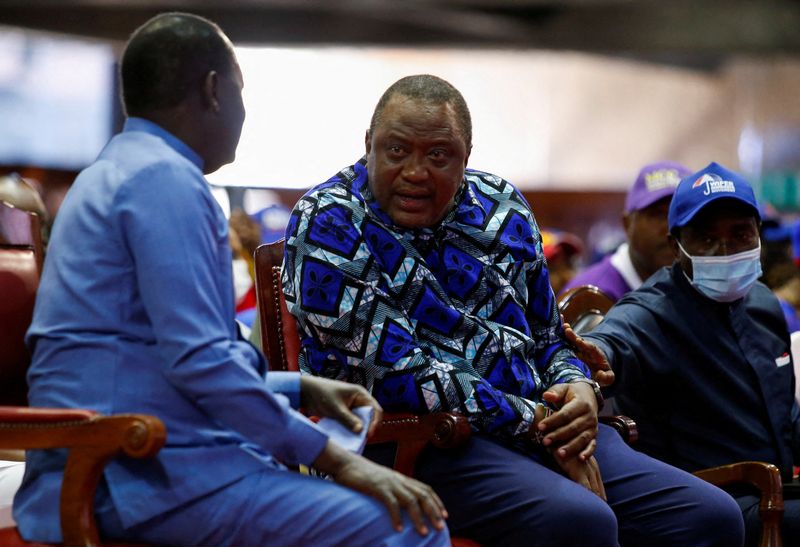 NAIROBI (Reuters) -Kenya’s top court on Thursday stopped President Uhuru Kenyatta’s divisive bid to make sweeping constitutional changes which opponents say was an attempt to widen the presidency’s powers and has dominated early campaigning for an election in August.

His estranged deputy and presidential candidate William Ruto has charged the changes would have led to an all-powerful presidency, while Kenyatta argued the proposal would promote power sharing among competing ethnic groups.

In a majority judgement, the Supreme Court, whose ruling is final, upheld a finding by the lower courts that Kenyatta initiated the changes through a constitutional provision exclusively reserved for citizens, not executive leaders.

“He cannot run with the hare and hunt with the hounds,” said William Ouko, one of the judges of the seven member court.

Last year, the High Court and the Court of Appeal struck down the proposed amendments popularly known as the Building Bridges Initiative (BBI), prompting the government to appeal.

Kenya is East Africa’s most well-off and stable nation and a close Western ally that hosts the regional headquarters of international firms like General Electric and Alphabet Inc.

The country of 50 million people enacted a new constitution in 2010, designed to partly discourage the ruling class from amending it constantly to suit their short-term interests, which constitutional experts said was the bane of the previous independence charter.

If Kenyatta’s amendments had succeeded, they would have led to the creation of 70 new parliamentary constituencies and establish several powerful new posts: a prime minister, two deputies and an official leader of the parliamentary opposition.

The president and Ruto have clashed publicly over the proposals. Although Ruto is running for the presidency in the August 9 presidential poll, Kenyatta is backing his former foe, veteran opposition leader Raila Odinga, who favours the amendments.

“They have told us they will bring back the BBI monster because they want to create an imperial presidency,” Ruto told his party’s delegates earlier this month.

The constitutional changes will create an all-powerful presidency by giving him control of the judiciary through a proposed office of a judicial ombudsman, Ruto said.

It will also put the legislature under the president’s thumb through control of the appointment to the new posts to be created, he said.

“I reject the suggestion that a united country is one that has no political competition or opposition,” Ruto said, adding that a democratically elected government, policed by a robust opposition, was the solution.