Patience is a virtue and for the New York Knicks, they could soon be rewarded for waiting out two decades of mediocrity.

With two max-salary slots expected next summer, the team is going to be major players in the free-agency market which could yield one or two bona fide stars coming to Madison Square Garden to team up with the likes of Kristaps Porzingis and Kevin Knox.

For the time being, though, one more down season lays ahead for a franchise that hasn’t made the playoffs since 2013. The schedule for this season was released over the weekend, the team’s 73rd year of existence, which will begin on Oct. 17 at Madison Square Garden against the Atlanta Hawks.

Here are some notable games to look out for while marking your calendar. For the Knicks’ full schedule, click here:

The defending NBA champion Golden State Warriors descend upon Madison Square Garden early in the 2018-19 season. The New York crowd will get a chance to get an up close and personal look at Steph Curry, Kevin Durant and Klay Thompson, who could possibly be on the Knicks’ radar in free agency next summer.

In a weak Eastern Conference, the Indiana Pacers are a dark horse to make some noise in the 2018-19 season. Victor Oladipo continues to develop into a star while the young Myles Turner as the upside to become one of the dominant big men of the East. They will visit the Knicks on Halloween night, 8 p.m. ET on ESPN. 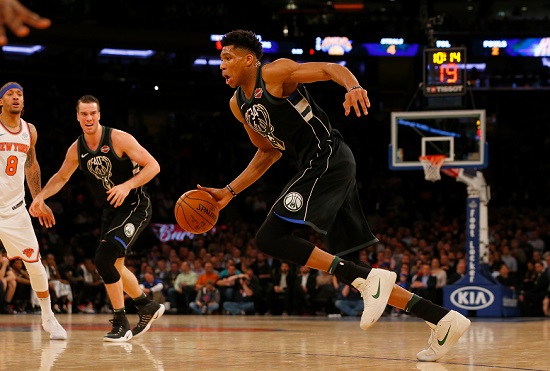 The tradition of the Knicks playing on Christmas Day continues for a 53rd time, the most of any NBA franchise on the holiday. It hasn’t necessarily been a successful holiday, either. While the team’s 22 wins are the most of any organization on Christmas, the 30 losses are the most as well. They will welcome the Milwaukee Bucks and Giannis Antetokounmpo, who has a flair for the spectacular at MSG, 12 p.m. on ESPN.

For the third time in franchise history, the Knicks will play a regular-season game across the pond at O2 Arena in London, England. It is the team’s first trip since 2015 where it was dismantled by the Bucks. This winter they’ll face John Wall, Bradley Beal and the Washington Wizards at 3 p.m. on NBA TV.

As the NBA continues to help celebrate the life and legacy of Martin Luther King Jr., the Knicks will host the Oklahoma City Thunder at 12:30 p.m. on NBA TV. The Thunder and 2017 MVP Russell Westbrook will be keen on showing the league that they can stay relevant in the Western Conference alongside the Golden State Warriors and Houston Rockets.

LeBron James will make his first appearances at Madison Square Garden, one of his favorite places to play, as a Los Angeles Laker on St. Patrick’s Day afternoon (12 p.m.). The signing of James from the Cleveland Cavaliers has suddenly catapulted the Lakers from irrelevance to contender in the loaded Western Conference as he will try to steer a young roster that features Lonzo Ball and Brandon Ingram deep into the postseason.