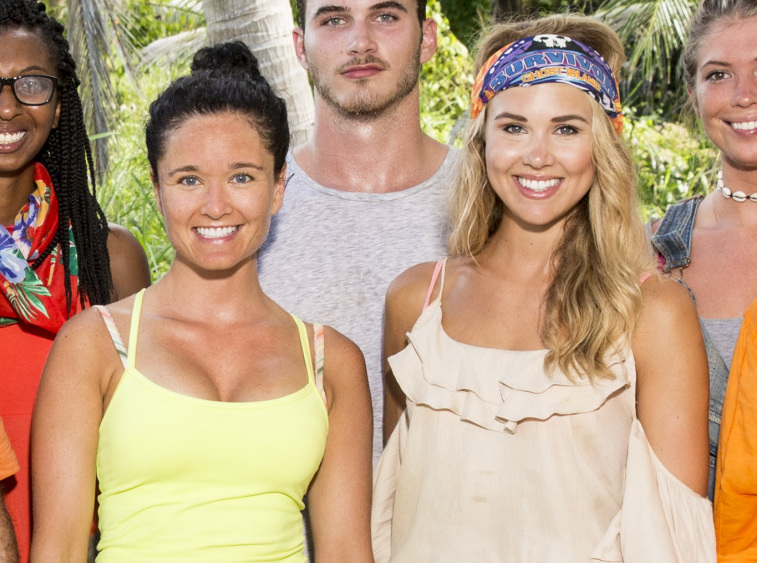 The 36th installment of Survivor is finally kicked off and there is a completely new cast of castaways.

The season has an interesting theme — Ghost Island — where the survivors will have to deal with the mistakes made by their predecessors on the long-running TV show. Among the new slate of characters are Libby Vineck, on the Malolo Tribe and Stephanie Johnson, on that same tribe.

Vineck is a bubbly blonde from Houston who works as a social media strategist. Johnson is a brunette Yoga instructor from Chicago. Each are among the better looking cast members in the show's history. Enjoy — below — a sampling of their best posts from Instagram:

Think of something that truly makes you smile... I’m talkin’ bright eyed, beaming, real gosh darn cheesy smile... I don’t know what in the world is going on in this picture but something made me sappy happy! We’ll find out in just ONE WEEK YALL! That fact actually makes me cheesy smile right now! CBS AT 8pm CST ??? #survivor #survivor2018 #survivorghostisland #thebufflife #cbs #et #smile #livinitupwithlibby #inspiring #cantbelieveit #onemoreweek

In May 2017, I said yes to an adventure of a lifetime! I boarded a flight to Fiji with 19 complete strangers for a life-changing experience. This spring, I along with my new family will get to share our entire experience with you! Excited to finally announce that I am one of the 20 castaways who will be competing on the 36th season of Survivor! Tune in to CBS on 2/28, 8PM ET, for the 2-hour special premiere. It's going to be a wild ride. Survivor #SurvivorGhostIsland #Survivor36 #survivor #stillindisbelief #itfeelslikeadream #lifechanges #WOW #thehollywoodreporter #cbs @thehollywoodreporter_ @cbstv @officialsurvivor_cbs @entertainmentweekly

Looking back thinking you worked hard ☑️ now work harder. ? Getting ready for the new year! 2018 is going to be big! ? . . . #setgoals #goalsgetter ? @simonlopez

Did I️ mention how much I️ loved my @bravafitwear leggings? Go get a pair and see if you love them too! Oh and Use code LIBSTER10 at checkout! You’re welcome ? #lungeitout #tushytuesday #fitwear #getactive #fitlife #yogapants #liftingapproved

10 MILE Trail Run with all my signature FAVS ✨?✨ Trucker Hat Lipstick Aviators Neon Colors ✨?✨ Chicago warmed up so I squeezed in one last big RUN before the NOLA Rock and Roll Half Marathon this weekend! ??? I haven’t ran double digits yet this year and I haven’t been on my trails yet. I’ve fiercely missed the long run, fresh air, warm sun and scenery. ?☀️ Trail Running stole my heart last year and I think it’s time to venture into some trail races ? #DreamingBigDreams

“Never apologize for being a powerful fucking woman” ?▪️? Thanks to a special friend for posting this reminder this AM ??‍♀️ ?▪️? Isn’t it funny how you can follow someone on social media and yet they prob don’t have any clue how much they motivate or inspire you??? I am guilty of not always telling people how much they do for me, but I’ve decided I am going to be better. Because there is enough harshness out there in the world that people could benefit from a little more genuine love. Don’t ya think??? ?▪️? I’ve had some setbacks this week but with almost 11 hours of sleep last night, I woke up feeling like everything is going to be ok. I know it seems trivial, but sometimes just having that hope is what flips everything from despair to resolve. That’s why we call life a beautiful mess huh? ?▪️? Anyways, just had to repost that quote and maybe you needed to hear that too ? Because you are a powerful fucking woman and don’t need to apologize for it and you sure don’t need anyone in your life that doesn’t treat you like that.✌? ?▪️?

3:30am start to my day?? 5 mile RUN is done??‍♀️ This is what 90% of my training really looks like ... Haha! Just me and my treadmill in the dark early morning hours. ? I have a soccer tournament for my oldest today so the only way I could squeeze in my morning routine, some work and my training is to wake up early. ?????? 2 weeks to NOLA 1/2 Marathon 6 weeks to Ocean Half Ironman

I let go today ? I can’t even tell you the adrenaline and rush this gave me. I felt like I was flying ? I’ve been working a lot of technique and strength for many months and I feel like this is my first “trick” on the pole. ☺️ I didn’t breathe the entire time I was upside down but ..... I didn’t fall on my head and pass out so I think that’s winning ???‍♀️ For those interested in my cross-training, this is it! Pole and Yoga. I believe in using body weight for strengthening and I found a passion! I still love weight training but for now, this is my strength and cross training. I’ve truly never felt more empowered and strong and like I have so much room to gain a ton more real core and inner strength in the months and years to come. ?????? I’m LOVING this pole fitness journey. I feel at home and peace here. I found dancing that resonates with my spirit. Today after we danced through our second song I felt a rush of emotion that I haven’t felt before. It was powerful. I love this creative expression. I love the inner confidence and strength. ??? Find something ... ANYthing in life that makes you feel ALIVE and do it as often as you can. Find a way to express and create. Our bodies were made to move and our spirits meant to create. Follow any curiosity you have. I didn’t start doing pole dancing until I was 35. There are ladies decades older than me practicing too. It’s NEVER too late to grab a new hobby! You’re never too old. Just take a chance and who knows what you’ll find ? I found myself holding my breath upside down letting go of a pole ... who knew ???‍♀️????

It’s still surreal to me I played Survivor last summer. ? And that you all know now! ? And how TAN I was! ? ? Swipe over to see my Malolo Tribe! ????? Here’s a fun Superfan story. I started watched Episode 1, Season 1 and was hooked. My mom was too! I was in college at that time and was headed to teach English to children in Russia for 6 months. This was before the time of DVRs and Netflix (yes I am aging myself here! ???) ... so my Superfan Mama recorded on VHS (WITHOUT COMMERCIALS!!! You oldies know how serious we took this by that statement ???‍♀️) each episode of Survivor: Marquesas for me. I binge watched them all when I got home. At the time I was Mormon and Neleh was on and came in 2nd. She was Mormon too and I related to her so much. It inspired me to apply for my 2nd time after watching her. It obviously took about 15 more years to finally get on but I never quit trying and dreaming! ????? @officialsurvivor_cbs #SurvivorGhostIsland

Bikinis•Boats•Sunsets These are a few of my favorite things.... What are yours? #DreamingOfWarmWeather #OverWinter

After almost 3 weeks of living rugged, dirty, layered up and pushing my body to new extremes in the mountains of Patagonia .... It felt pretty damn AMAZING to get back to my dance studio and insanely amazing teacher embracing my more feminine wild side with movement and openness. ⚡️?⚡️ My body is still pretty wrecked and bruised so I’m taking it easy this week and next week I start training for NEW ORLEANS 13.1 and OCEANSIDE 70.3 ??‍♀️??‍♀️??‍♀️ What are YOU training for now?!?

I’m in L?VE with the idea of being anything anyone and everything I’ve ever wanted to be with no fucks given on anyone else’s perception. ??? Perception may be someone else’s reality but that doesn’t mean it’s yours. ??? #DreamReallyFreakingBig #LiveWildBeFree #PoleDancingTriathlete

Goodbye Sun ☀️? Goodbye Ocean ?? I wonder when and where we will meet again ...

Literally all I want to do anymore is play around in the weight room or be flying on poles or aerial silks ... Hahaha! My love for Triathlon is still there but on the back burner to getting strong AF ... But I will hop on my treadmill right now that the kiddos are in bed ????‍♀️ Week 4 of strength training this week and it’s absolutely incredible how much your body can change in just a short time. I already feel stronger and notice it greatly and I’m even like half way to one pull up! ???‍♀️ The only thing I know for sure is that there’s no doubt I’ll be going into next Tri season stronger than ever before and ready to kick some ass ??? I’ve got some new goals too that I’ll share soon that require mad strength so let the games begin ?

I’ve spent the last month “recovering” from Ironman both mentally and physically ... the extra sleep, glasses of wine and donuts have been amazing BUT you marathoners inspired me yesterday and I’m ready to turn up the ? again and get STRONGER the next 6 months! ??⚡️??‍♀️ I still have Austin 70.3 left this year but I’m dialing down the distance work and upping the intensity with swim bike and run while focusing more on core, weights, tons more yoga and pole dancing. My mission ... Leave 2017 even stronger physically than I was when I started ?⚡️?? It’s going to be baby steps back from endurance training to strength/flexibility training but I’m fired up and excited! ???‍♀️??‍♀️??‍♀️ #StrongIsSexy #OwnYourWILD