Adam Weiner has had to fight tooth and nail to get the world to notice his band Low Cut Connie. The songwriter, piano player, and live-wire performer doesn’t waste a single moment on stage as he prowls back and forth, scowls at the crowd and stomps on the keys of his piano to get his Rock and Roll gospel across. While his band still remains unsigned, Low Cut Connie is playing to bigger crowds as they gain more fans with every passing year. I caught up with the Jersey native before both the band’s massive free show tonight at Robert F. Wagner Junior Park in Battery Park City and Weiner’s solo show at Joe’s Pub on August, 1.

“I want to make people dance. I want to move their bodies,” — Adam Weiner of Low Cut Connie. 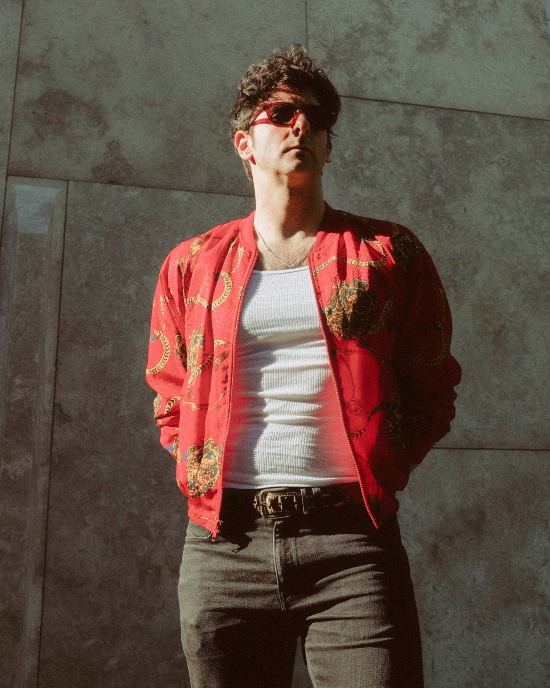 You’ve said in interviews that the music that Low Cut Connie makes is “Rock and Roll” and not “Rock”. Could you explain that distinction?

Adam Weiner: Well, not that I don’t like a lot of “Rock” music, I think that what we do is drawing more from an early iteration of “Rock and Roll” before it became “Rock”. Why was it called “Rock and Roll”? It’s dance music. This is dance music. This is music for the club, for the jukebox, this is music for kids. Saturday night music to make people dance! Everything back then was music to generally make people dance. All of those early records; Chuck Berry, Little Richard, Ike and Tina and then Stax and Motown. These are the greatest rock and roll records ever and you can dance to them. They’re the widest vision of what rock and roll can be. It’s just liberation of your body and your spirit. I feel that as time went on and we got more into what they called the “Rock Era” certain people would take one strain of it and fixate and fetishize one strain. Obviously, a lot of that rock and roll in the ‘50s was shocking, but it was also boogie music. Then you had people later who would focus on being shocking without the rhythm aspect of it, or the opposite. Although I like some of that music, that’s not what I do. I want to make people dance. I want to move their bodies.

So much of the band is the live experience. You are such a dynamic performer who can whip crowds into a frenzy. Was it difficult when the band was first starting out to get people to respond?

Adam Weiner: Well, everything with this band has always been a mess. We started out as an unplanned pregnancy. Maybe some people get together and have a board meeting and decided to start a band and then they make a mission statement. That isn’t how this happened. This was an accident. I ended up in a situation where I had this record that I really believed in and we had some fans but we didn’t have a consistent band. We didn’t have a consistent lineup to tour with. We didn’t have any resources. We didn’t have any money or management or label. It’s been one crazy struggle and wild swing after another. I’d like to sit here and tell you that I planned it all and that there was a lot of strategery in creating the live performance, but it just evolved, really. It always had pure, raw energy and I think as I got more and more shows and songs under my belt, I guess I just got better at controlling the factors and facilitating a good time for everybody. If your job is to make wild crazy things happen, at a certain point you do have to get control over it. Because if you do it 150 times a year and you go out there with a flamethrower and just go bananas for 90 minutes you’ll hurt yourself and just burn out. I had to figure out how to add some dynamics to the show. So, I think we’ve done that over the last couple of years.

You’ll be playing a solo show at Joe’s Pub in August. Do you bring a different sort of energy to these solo performances than you do with a band?

Adam Weiner: Yeah, it’s a different muscle group. But I have my 10 or 20 thousand hours of doing it. The beauty of it is now I have fans! I used to do it for years and I had no fans, no one cared. I would just force myself to do it over and over again. I would describe the first many years of my career as very parallel to stand-up comedy. Because if you want to be a successful comedian, you have to get up with no fear in front of hostile audiences that don’t know you. You have to do it over and over and refine your material to get better. You have to do it for years and most of them get weeded out. But the ones who are really great and who are really focus and stick to it eventually get so good that they get elevated. I did that for years. I didn’t have any fans so I would go out there and put myself in the most unforgiving situations. I was always by myself. Nowhere to run, nowhere to hide. Just me and a piano or me and a guitar. I’ve been having a lot of fun going back to that a little bit and I cannot wait to do it at Joe’s Pub. It’s a fabulous club and I will tell you, we’re sort of going back to the scene of the crime. In the second year of Low Cut Connie, we did one of our first, kind of, legendary New York City shows at Joe’s Pub. There were a ton of music venues back then in 2012 that would not book us. For some reason, Joe’s Pub booked us. I really don’t know why. To this day, I have no idea. But it was a great, great show and a lot of the New York City critics and people in the industry, it was their first time seeing us. I’m going back to the scene of the crime. And this time I’m going back with 5 more records under my belt and some fans.

Watch Low Cut Connie performing ‘All These Kids Are Way Too High’ on Late Night with Seth Meyers.

In 2015, President Obama included “Boozaphilla” on a summer playlist. How validating was that when you heard the news?

Adam Weiner: Well, I didn’t really take stock because you have to understand the context, Pat. Because the band was really struggling and it’s always been a struggle with the band. We never got signed. We’re still not signed! I was forced to take this DIY path with the band and I’ve always had a million people coming in and out of the band. I never had a lot of help and I didn’t know what I was doing. Things were always kind of a mess and we were always one wrong turn from it all being over. So the Obama playlist happened at a very crucial time when things were sort of creeping along. I was going into a lot of debt. It just seemed so unfathomable to so many people that that would happen. I remember that a guy from the New York Times tweeted, and it’s so odd to think of this in our new era that we live in, “I can’t believe we live in a country where our President listens to Low Cut Connie”. It put wind in my sails, is what it did. It didn’t really change my fortunes. It’s wasn’t like the music and entertainment industries paid attention. There were no labels that called our any opportunities that came from it. It was more of an internal change. I got to go to the White House and meet Obama and he was so kind and so encouraging. He said “I like what you’re doing, I like your style. Keep it up.” So at that point, what am I going to do? Am I going to give up? I had written a song in my bedroom that had traveled that distance and had brought me to that moment. If you can do that, then you know if you try and you really work and believe in yourself, maybe you can do other great things. I just re-upped my commitment to what I was doing.

Check out “Dirty Pictures (Part 2)”, the latest album by Low Cut Connie, below.