Mark Mulcahy on his compassionate album ‘The Gus’ – Metro US
Entertainment

Mark Mulcahy on his compassionate album ‘The Gus’ Mark Mulcahy may have released one of the most meaningful political records of the year with his new album “The Gus”. Not by presenting any answers or sloganeering, but by simply writing with the qualities of someone who actually listens to what his neighbors have to say instead of casting them aside.

In many ways, “The Gus” is a very different record than the one-time Miracle Legion and Polaris frontman has made in the past. Inspired by the writing of George Saunders, he decided to narrow his focus on smaller details of specific characters and their everyday lives. The recording process was also something he wished to change up from his usual routine, with a revolving cast of musicians from song-to-song including J. Mascis of Dinosaur Jr. showing up here and there.

“I have a lot of songs about desperate people who you wouldn’t necessarily think about having compassion for. At the same time, if somebody does something horrible, there’s got to be some desperation,” – Mark Mulcahy 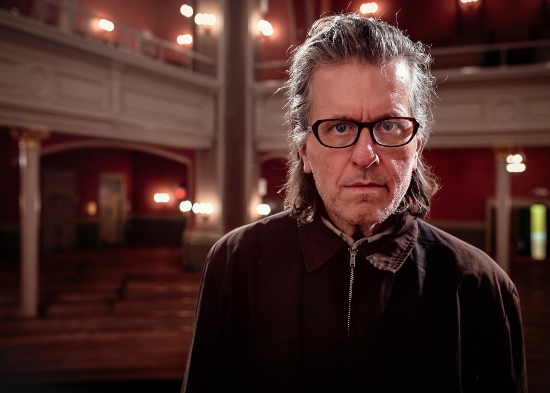 “Typically, I would make a record to make a statement or to document where I am at that minute,” says Mulcahy, over the phone. “It’s 19 whatever, or 20 whatever and here it is. For this record, I worked a little harder than I normally do, I suppose.”

Much like his last record, his 2017 opus, “The Possum in the Driveway”, Mulcahy has delivered an album that takes on a focused and emotional arc in lieu of simply a collection of fleshed-out singles. The characters he outlines in “The Gus” represent everyday Americans acting out of desperation given their unfortunate circumstances. As a poignant and sympathetic writer, these character studies by Mulcahy show an understanding that this kind of desperation should not be confused with bad intentions. Maybe robbing a store will get you out of your dead-end town? Maybe voting for someone based on their promises will help shine a spotlight on a state that most people only fly over? There is a reason for the decisions people make, even if they end up doing more harm than good.

“I think most people are happy to disagree,” says Mulcahy on the political approach of the new record. “I think it’s just one end or the other that can’t let anything go. In terms of writing about things, generally, I have a lot of songs about desperate people who you wouldn’t necessarily think about having compassion for. At the same time, if somebody does something horrible, there’s got to be some desperation. I’ve always wanted to write about that. I don’t know how many times I’ve succeeded. It’s easy to write about ‘f–k you’. But I’m thinking about your end too.”

Crafting the perfect sequence of “The Gus” was of the utmost importance to Mulcahy, as it is with all of his projects. But with this record, it seemed absolutely essential. After all, you wouldn’t jump into a show midseason, would you?

“Because of the way I came up, the album is what I know,” he explains. “Once I was having drinks with David Thomas of Pere Ubu, and he made this great speech about how the album as an art form. We were talking about shuffle and how people are not qualified to decide the order. Because I really put a lot of time into all of that stuff. I put a lot of time into side A and Side B. It’s a struggle to figure everything out and make the best order you can. I would not want to give that up but at the same time, this is the world… One of the things that bugs me the most is when they play ‘We Are the Champions’ [by Queen on ‘News of the World’] and they don’t play that little bit after. If that doesn’t come on, I’m stuck.”

The opening track on the album, “Wicked World”, ranks up with Mulcahy’s most emotionally affecting songs and perhaps one of the most powerful opening tracks on an album you are bound to hear this year. It’s the kind of tearjerker only Mulcahy can really write. With Rainn Phoenix taking the second verse of the song and adding harmonies with Mulcahy, it hits you when you aren’t looking and lays you to bed when you lose consciousness. I ask Mulcahy if he aims for the heartstrings with songs like this one, or if he surprises himself in the process.

“I don’t really try. I don’t have a plan or anything. It just happens that way. Somebody once told me, ‘You were sent to make people cry.’ Including myself! I played a gig at this festival in England, I was doing a song that I’ve done plenty of times and I was just weeping. People can tell because you can’t sing anymore. It’s obvious. I sort of apologized a little bit. But that’s what it’s supposed to do. It’s the same for me as it is for you. I’m as much a listener as I am a maker.”

Make sure to catch Mark Mulcahy on the road this Fall.

Stream “The Gus” by Mark Mulcahy below…