Whenever audiences hear the name “Mark-Paul Gosselaar,” chances are they’ll immediately think about the younger version of the now 44-year-old actor who played Zack Morris in Saved by the Bell. Otherwise, they might recall his more recent performances in the underrated Franklin & Bash and Pitch, both of which are sadly no more. With FOX‘s new genre series The Passage, however, Gosselaar is trying out the worlds of science fiction and fantasy for the first time in his career.

Mark-Paul Gosselaar on The Passage

“What attracted me initially was the character-driven aspect of it. At the core of it is the relationship between Brad and Amy,” he says of his and Saniyya Sidney’s characters. “I didn’t know much about the books. I hadn’t read them before I read the script. But knowing that Ridley Scott, Matt Reeves and Liz Heldens were at the helm, and the genre aspect of it, made me realize just how big the expectations behind this were. That’s what really excited me about it. I really trusted that they would take the show in the direction that it needed to go.” 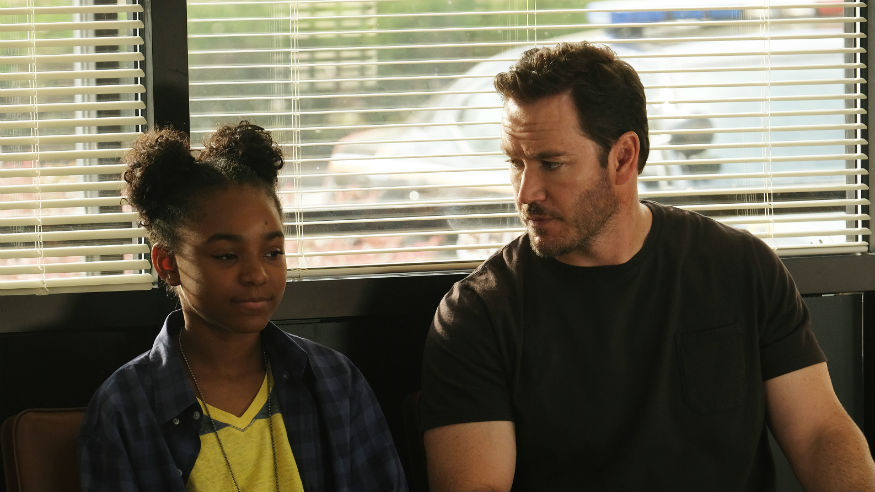 Gosselaar isn’t wrong, for one of the most surprising (and strongest) elements of The Passage is the onscreen relationship that develops between Federal Agent Brad Wolgast and Amy Bellafonte (Sidney). Tasked with taking her to a secret government facility experimenting with an all-in-one cure based on vampire DNA, Wolgast instead decides to protect Amy from her would-be captors. Much of the characters’ chemistry has everything to do with Gosselaar and Sidney’s work behind the scenes.

“It goes against the old saying, ‘Never work with animals or children,'” he jokes. “It was just an extraordinary experience to work with such a talented, young professional. She’s only 12 years old, but some of the stuff that she does on screen took me by surprise. I was like, ‘Where do you get that from? That’s amazing!'”

Aside from the show’s central focus on Wolgast and Amy’s relationship, the challenge of making a series heavily steeped in genre and everything that comes with it was also a factor in Gosselaar’s decision to get involved. “I’ve never done a genre show quite like this,” he explains. “Dealing with things that will be put in during the post-production process proved to be quite challenging at times. You’re literally reacting to something that really isn’t there when you’re shooting the scene.”

Another aspect of Gosselaar’s involvement in The Passage that stands out is the fact that his character, at least in author Justin Cronin’s novels, doesn’t survive for too long.

“Brad dies in the first book,” he tells Metro. “Then I read the second book and he wasn’t in it much, except for a few mentions. And when I got to book three, I just did a search for his name and nothing came up. I was like, ‘What the hell?’ I actually called the producers and FOX about it, and they said I would be sticking around for a while. I mean, I would love to stick around for the duration of the show, and from what I’ve been told by the powers that be, we’ll be staying very close to the book in this first season.”

“It should be interesting to see how it plays out,” adds Gosselaar, “but I’m just along for the ride. I love this project. I love what we’re trying to accomplish. So if I can be a part of it in any capacity, that’s great.”

When does The Passage with Mark-Paul Gosselaar premiere?

The Passage premieres Monday at 9 p.m. ET on FOX.