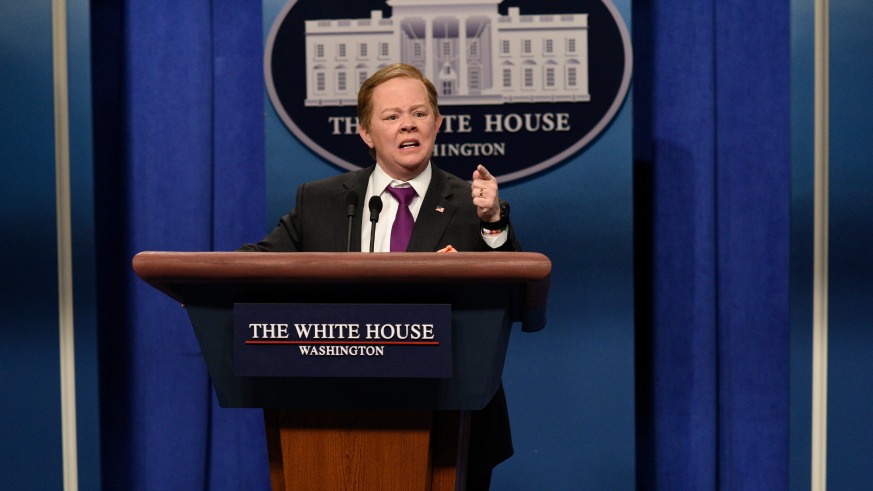 Since its debut in 1975, “Saturday Night Live” has been lionized and criticized for defining presidencies. But never before had a press secretary been immortalized until this season: Melissa McCarthy’s portrayal of the combative Trump administration flack Sean Spicer has become an instant classic since her first appearance earlier this season, and there’s good reason why: Her borderline-apoplectic comic business has been one of the few sources of mirth in the deteriorating Trump era.

McCarthy will no doubt reprise her role as Spicer when she hosts “SNL” this weekend. Ahead of that, she was spotted in an intriguing appearance this morning on the streets of Manhattan. Brian Stelter, host of CNN’s “Reliable Sources,” reported that McCarthy appeared to be filming segments for the show outside the CNN building.

Others spotted McCarthy making a quarter-turn on a blocked-off street:

Spicer has been rough on the press since his debut as press secretary, forcefully and sometimes outright angrily responding to questions. He’s also been an instant target for mockery: Reviews of his first appearance in January excoriated everything from his easily disproven assertion that the inauguration was the “most viewed ever” to his ill-fitting suit.

McCarthy concentrated on his anger and condescension toward the press, at one point blasting a journalist with a water gun and driving into the crowd with the motorized podium.