Mischief Night: When is it, when did it start and is it the same as Devil’s Night? - Metro US
Lifestyle

Mischief Night: When is it, when did it start and is it the same as Devil’s Night? Mischief Night or Devil’s Night can be a trick or a treat, depending on which side of it you end up on.

If there’s any day that can be thought of as the official TP-your-neighbor’s-house day, Mischief Night is it. Whether you refer to it as Mischief Night or Devil’s Night should probably depend on the tricks you plan to pull on your unsuspecting friends and neighbors.

When is Devil’s Night, or Mischief Night?

Though you might not have been aware that it had a name, the night before Halloween is dubbed Mischief Night or Devil’s Night. That’s the night of October 30.

What do people do on Devil’s Night?

Usually the pranks pulled on Devil’s Night are such classic petty crimes that they’re now stereotypes in how we talk about Halloween: TPing someone’s house or lawn and soaping their windows on the mild end and tossing eggs rotten tomatoes at their front door or throwing a flaming bag of dog doodie on their doorstep on the messier and more severe end.

Wait, is Mischief Night the same as Devil’s Night?

Although historically the names were interchangeable and both referred to the night before October 31 or Halloween, the meaning of Devil’s Night has become more specific. The night of small pranks on the part of kids and teenages is marked in random areas throughout the United States, but in Detroit, Michigan, these nights saw much more serious destruction, particularly through arson.

In fact, the arson characteristic of Devil’s Night revelries in Detroit was a phenomenon prevalent from the 1970s all the way through to the mid-1990s. The destruction was so widespread that a charity campaign, aptly named Angel’s Night, was created to counterbalance it. 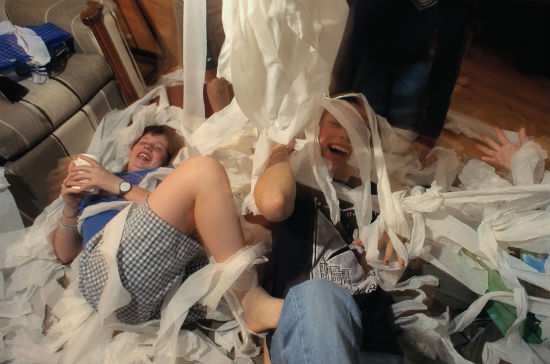 Actually, it dates back even earlier. The earliest reference of Devil’s Night can be found in the 1940s, but Mischief Night predates it. Those references go back to 1790, The Guardian reports, and a school play involving the fellow of St. John’s College, Oxford “which ended in ‘an Ode to Fun which praises children’s tricks on Mischief Night in most approving terms’.”

Experts believe that the pranks and gambits planned on Mischief Night were a part of May Eve revels in Britain that were transferred to later in the year as a product of the stunts seeping out of the cities and into smaller towns with the industrial revolution.

Although Mischief Night itself is not illegal, many of the pranks that kids and teens like to carry out are. The unofficial day enjoys notable presence in New Jersey, where some towns have adopted a zero tolerance policy in an attempt to combat the regular acts of vandalism.

According to a Harvard Dialect Survey looking at how Americans speak, the night is also referred to around the country as Gate Night, Cabbage Night, Goosy Night and Trick Night.