The New York City subway is its own special ecosystem, where humans may ride the trains but the stations and rails are fair game for any number of creatures — most commonly rats and pigeons, with the occasional wayward goose and goats. Maybe even the Central Park Mandarin duck arrived here by train.

And while New Yorkers have long been creatively interpreting the MTA’s rule about dogs being allowed on the subway in carriers, cats are a much rarer sight. In fact, no one at Metro can recall seeing a cat commuting outside of a carrier until the night of Feb. 19. Meet Morty: 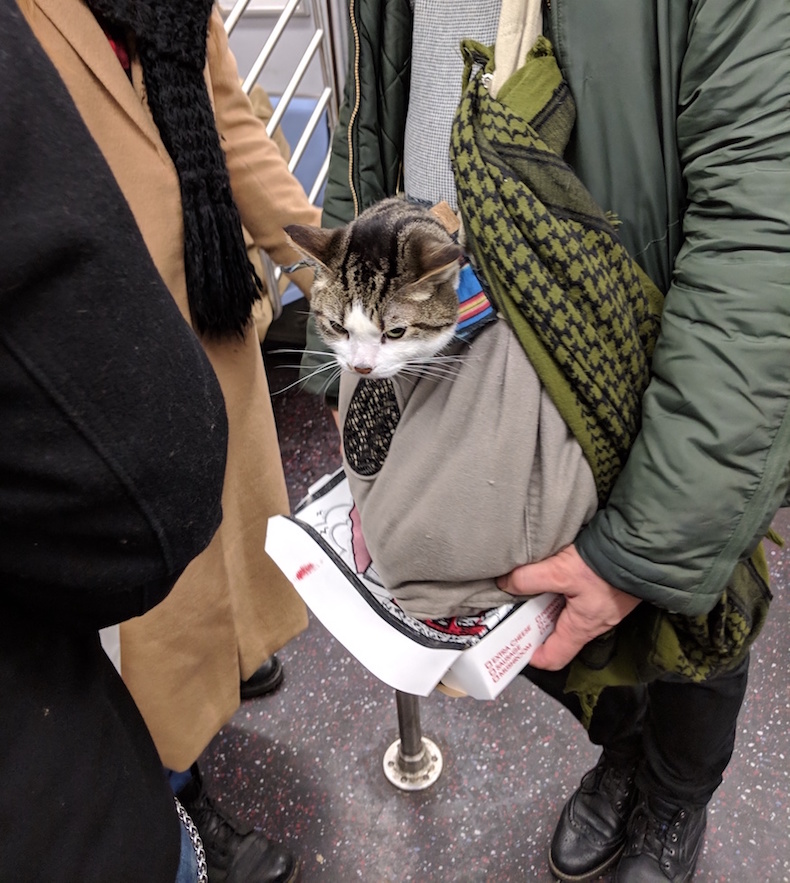 This tabby was commuting home with his owner, M., on a Brooklyn-bound J train (identity and location withheld for obvious reasons). Wearing a colorful bandana, lounging in a canvas bag on top of a pizza box — what one Twitter user called a pizza carriage — he looked about as happy about it being Monday as anyone else.

With his thousand-yard stare, Morty didn’t care around the jostling of the tracks or people getting on and off the train. He never so much as looked in my direction as I chatted with his owner. Truly, a model commuter.

M. says he takes Morty with him all the time, all over the city. In fact, one of M.’s companions was holding a takeaway bag from Midtown’s trendy Korean restaurant Her Name Is Han. However, even if Morty has similarly good taste in cuisine, his owner’s claim that he is allowed in restaurants because “he has all his papers” is false.

Only clearly marked service dogs in a harness or on a leash have an all-access pass to New York City, including a recent matinee show of Waitress on Broadway. (Yes, the golden retriever was even trained in how to behave at the theater.)

Commuting cats are not unprecedented — in fact, the New York Transit Museum in Brooklyn “employs” a cat named Sadie for pest control. Other famous transit cats include Dodger, who takes round trips on a bus through his English county of Dorset, and a cat who regularly rides Tokyo’s Seibu Ikebukuro line. Station attendant cats are also somewhat common, most famously at Istanbul’s Taksim Metro station.

But cats outside of a carrier in the New York City subway are usually in need of rescuing. Morty actually bears a striking resemblance to the cat who gave MTA workers the slip for two weeks in November 2017 before being nabbed at the Prospect Park Q station.

Our subways staff rescued this guy from off the tracks and brought him to a no-kill shelter. Something to be thankful for! https://t.co/RWpUMoczxZ pic.twitter.com/D3MfqeFSDV

The only time all pets are allowed on every form of public transit anywhere in New York state is during an emergency, a law signed by Gov. Andrew Cuomo just in October 2018 after people refused to evacuate without their pets during Superstorm Sandy in 2012.

And while you’re thinking about cats, spare a thought for Choupette Lagerfeld today. Her human, longtime Chanel artistic director Karl Lagerfeld, passed away in Paris on Feb. 19. The Birman breed kitty starred in advertisements, had two maids and ate at the dinner table.

Karl Lagerfeld and his beloved pet cat Choupette starred in a self portrait on the limited-edition cover of our October 2013 issue. The legendary designer passed away in Paris today. https://t.co/nghkaj08pb pic.twitter.com/lVNnrpUQfi

Thinking of adopting your own cool cat? Kitten season starts in mid-April, but their high energy and excitability wouldn’t make them ideal commuters. Opt for a cat who’s at least two years old if you’d like a more mellow companion.