It appears the notorious neo-Nazi website, the Daily Stormer, faked an attack by the hacktivist collective “Anonymous” Monday in an attempt to drum up publicity and support for its message.

An article published on the website had, at first glance, all the markings of a Anonymous attack — vaguely threatening language, capital letters, images of the iconic Guy Fawkes masks — but according to one of the group’s Twitter accounts, the hackers didn’t actually have anything to do with it.

“END OF HATE: ANONYMOUS NOW IN CONTROL OF DAILY STORMER,” the headline reads. Then, “WE HAVE TAKEN THIS SITE IN THE NAME OF HEATHER HEYER A VICTIM OF WHITE SUPREMACIST TERRORISM.” 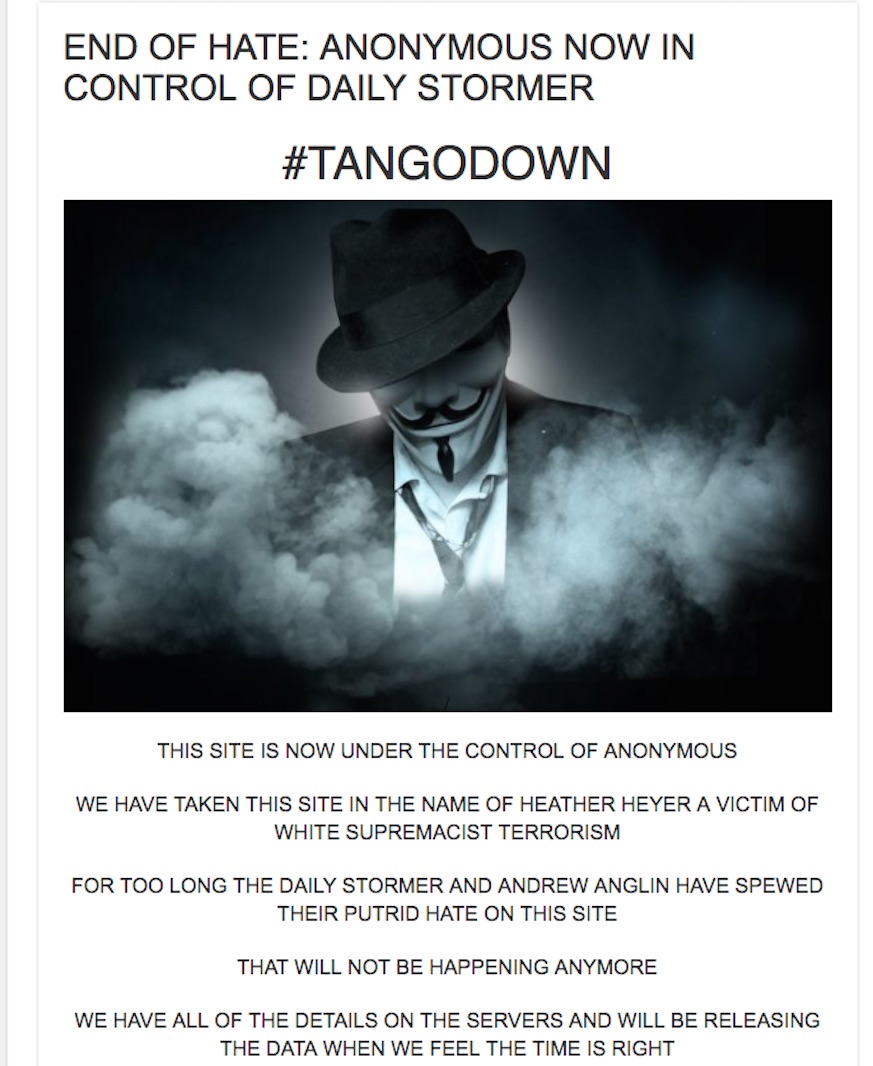 Heather Heyer died Saturday during the alt-right protests in Charlottesville, Virginia while attending a counter-protest when a white-supremacist drove into the crowd, injuring a dozen more.

But the alleged hack didn’t actually shutter the web page — readers still had access to all the articles on the site, including a controversial article denigrating Heyer.

The biggest tip off that the post was a hoax came toward the end.

“WE WILL ALLOW THE SITE TO REMAIN ONLINE FOR 24 HOURS SO THE WORLD CAN WITNESS THE HATE,” read the post. “THEN WE WILL SHUT IT DOWN.”

The plug was already being pulled on the Daily Stormer, after GoDaddy, the company that hosts the site, decided to drop the alt-right site due to the Heyer article, giving it 24 hours notice to move their domain or get shut down.

“We informed The Daily Stormer that they have 24 hours to move the domain to another provider, as they have violated our terms of service,” GoDaddy tweeted at 11:24 p.m. Sunday.

We informed The Daily Stormer that they have 24 hours to move the domain to another provider, as they have violated our terms of service.

By midafternoon the Daily Stormer claimed to have “retaken control” of the site. In a post explaining the hack, Andrew Anglin boasted about coverage of the attack in mainstream media, saying “well, we’re now number two on Google News.”

Anglin said he “outwitted the Jewish Anonymous hackers,” and denied rumors the site was getting shut down.

But why fake a hack by Anonymous? The @YourAnonNews account, the largest affiliated with the hacktivist collective with more than 1 million followers, said the site might be orchestrating a stunt to make it seem like the site’s removal is a conspiracy.

“And all the old content is left up by a “UNITED FORCE OF ELITE HACKERS” on a shit post site “UNDER THE CONTROL OF ANONYMOUS.” Doubtful,” @YourAnonNews tweeted.

And all the old content is left up by a “UNITED FORCE OF ELITE HACKERS” on a shit post site “UNDER THE CONTROL OF ANONYMOUS.” Doubtful. https://t.co/FNYRCYWEDx

Another account associated with Anonymous also denied the hack.

It’s like the Daily Stormer will go dark permanently once GoDaddy pulls the plug, because no company will likely be willing to host the site. The decision is a reversal from just a month ago when GoDaddy said, “while we detest the sentiment of [The Daily Stormer]…we support First Amendment rights and, similar to the principles of free speech, that sometimes means allowing such tasteless, ignorant content.”