Singer-songwriter Nick 13 has never really taken kindly to others inferring what direction his musical output should go in. After years of fronting the popular punk-meets-psychobilly band, Tiger Army, the tender voiced rocker threw fans for a loop, back in 2011, by releasing his very first solo album that had much more in common with Hank Williams than it did the Cramps. Needless to say, it through some fans for a loop while others welcomed the record as a deeply rewarding move from the gifted songwriter. When it was announced that Nick would be reviving Tiger Army for a new album in 2016, “V •••–”, many were unsure of what to expect. Or what they wanted, for that matter.

“There are so many things that I love and enjoy. Which of them that might pop up as something I want to draw upon at that time could really be anything. That’s where the music comes from, not some of the theories people come up with,” – Nick 13 of Tiger Army 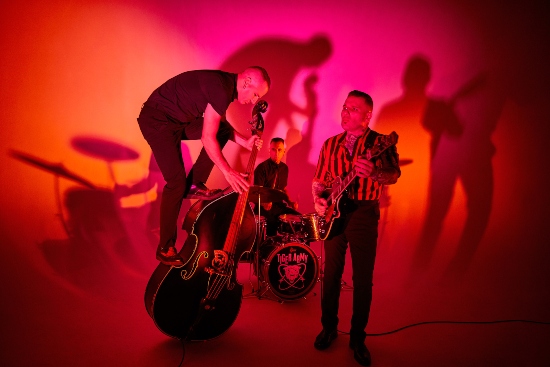 Along with new members, Djordje Stejipovic on bass and drummer Mike Fasano, Nick 13 was able to recapture the intensity of the band’s early days, all while incorporating some new elements from his foray into country music, as well as borrowing lush elements from the early days of Rock and Roll and Doo-wop. After touring the world behind “V •••–”, the band went into the studio in 2018 and released the surf-inspired “Dark Paradise” EP. They returned last month with a brand new full-length, “Retrofuture”; the title of the album providing a wink and a nod to those who still hold onto any sort of guidelines for the band.

“One of the things that this record was about was, we’re always trying to push the boundaries of what we do and evolve,” says Nick 13, when I caught up with him over the phone one afternoon. “But at the same time,” he adds, “I love the rock and roll and pop of the past and that’s always a source of inspiration for me. But I’m looking for ways to twist that and change that and combine it with elements that are more modern in some ways. That’s part of what the concept of this record is, as far as the title goes.”

Upon the release of the first single “Eyes of The Night”, Nick addressed his fans with this playful warning of what to expect from the album: “Listeners should never get too complacent in their idea of what Tiger Army sounds like,” he wrote in a press release, “there are more surprises ahead!”

As we talk more about his inspirations, we discuss how the rebelliousness of Rock and Roll and the independence of the Punk spirit can lose it’s danger and excitement when it gets burdened by the trappings of their labels. This kind of rank and file attitude can get to Nick 13 on occasion. Afterall, these were the kind of rules that he got into music to break in the first place.

“It does become tiresome sometimes because ultimately I’m creating the music that I’m inspired to create and that I’m feeling at that moment,” he says. “When people try to ascribe intentions that aren’t there, it’s a little annoying. For example, doing the solo record years ago was a left turn for me. But when I came back to Tiger Army, as a sort of a full time thing with the ‘V •••–’ album, it wasn’t because anyone was making me or because I had to. It was because I wanted to be doing that. Certainly, I was influenced by some of the things I learned during the time I was playing solo. But the fact that that album was a little bit slower, people said, ‘oh, he’s trying to combine the solo project with Tiger Army’. If I wanted to do the solo project, I would do the solo project. This just happened to be influenced by early 60s rock and roll and some of those influences that have always been a part of punk, but I was exploring in different ways…  There are so many things that I love and enjoy. Which of them that might pop up as something I want to draw upon at that time could really be anything. That’s where the music comes from, not some of the theories people come up with.”

As for right now, Nick13 is enjoying this lineup of the band and is more excited than ever to be out on the road spreading the Rock and Roll gospel of Tiger Army.

“It’s been great,” he says. “I think we sound as good onstage as we ever have. The tour has been a lot of fun. We play some of the new songs live and people seem to enjoy that. That’s a nice thing as opposed to them being indifferent (laughs).”

Tiger Army will play the Knitting Factory in Williamsburg, Brooklyn this Friday, October 4.