Older couples are living apart together, but what does that mean? - Metro US
Relationships

Older couples are living apart together, but what does that mean? Nowadays, you never really know what you’re going to get when entering, re-entering (or re-re-entering) the dating world. It all seems very complicated — there’s ghosting, there’s orbiting, there’s open, closed, not-sure-what-this-is relationships. And, as it turns out, there’s a phenomenon among older couples where they’re living apart together, or “LAT.”

The 1982 rom-com “Living Apart Together” chronicles the rocky marriage between a wife and her musician husband away on tour. But that’s not what this is: these couples aren’t always married. In fact, most of them don’t seem to be — and that’s the point.

It’s described as involving “two people in a long-term, committed intimate relationship who choose to live in separate households” by one 2014 study. In it, Laura Funk, a University of Manitoba associate professor of society, interviewed 28 couples averaging the age of 59. Only four of the couples were engaged or married, and 93 percent had been in at least one past relationship where they cohabitated with their partner. On average, the couples lived just a 15-minute drive apart and saw each other in person around three to four times per week.

Benefits of living apart together

The study lead by Funk related that the couples living apart together felt they had more time for themselves. Participants said that “their LAT arrangements provide the time and space to pursue their own individual interests (such as hobbies or recreation),” or that they were just the type of people who needed time to themselves. Choosing to live apart gave them a chance to “revitalize.”

Confidence in their relationship

An article on Psychology Today noted that these couples may find living apart together keeps their relationship strong because they’re with each other for the “right reaons,” not because they have to.

“For people who might be feeling unfulfilled in a relationship, living together can make them feel ‘stuck’ [due to] the additional hassle of breaking up,” the article explained. For LAT couples, “breaking up would be less of a hassle for them, so they can be more confident that they (and their partners) are staying in the relationship for the right reasons.”

Psychology Today also noted that it’s a “gentler way” to experience the “absence makes the heart grow fonder” effect that long distance has.

The majority of couples from Funk’s study had been married or in common-law partnerships before, and they noted that living apart together made them feel like their assets and well-being were protected.

Divorce is messy, and participants said their situations “‘protect where I live and what I have’ that they may have lost in previous separations (such as a home).” Their living arrangements help them “avoid legal and financial complications of declaring formally as being common-law … and dealing with estate issues” if they separated.

Also, in the event that their partners passed away, it would help them “avoid will and/or estate hassles that could pose challenges.” 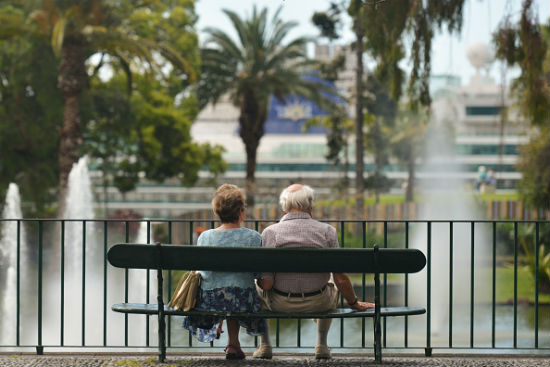 Disadvantages of living apart together

Potential to be “less happy”

A National Social Life, Health, and Aging Project (NSHAP) survey conducted between 2005 and 2006 found 7 percent of adults ages 57 to 85 as being in this type of relationship. And a study published in 2016, which used this data, found that older adults living apart together were “less likely to be very happy” compared to older married adults.

TIME reported that Jacquelyn Benson, University of Missouri assistant professor of human development and family science, interviewed 25 older adults living apart together. Her findings, published in 2016, suggested that there’s the potential for children (or other family members) to look down upon, or fail to recognize, this choice in relationship.

“In some cases, when a partner wants to step in and have a say, they’ve been pushed out by family members,” Benson explained in the study. One woman spoke of being “pretty upset” because her partner’s family moved him to a nursing home without her consent, and she didn’t find out until she couldn’t reach him.

One couple from Funk’s study said that it wasn’t about sticking to social norms — it was about breaking them: “To have the companionship it’s not necessary to live together.” And one man, playing into ageist beliefs that older people turn bitter, said living apart together keeps him feeling young.

“…sometimes I feel funny about that,” he admitted. “Like are we refusing to grow up? And yet I think, but I’m so happy, that why wouldn’t [we]?”