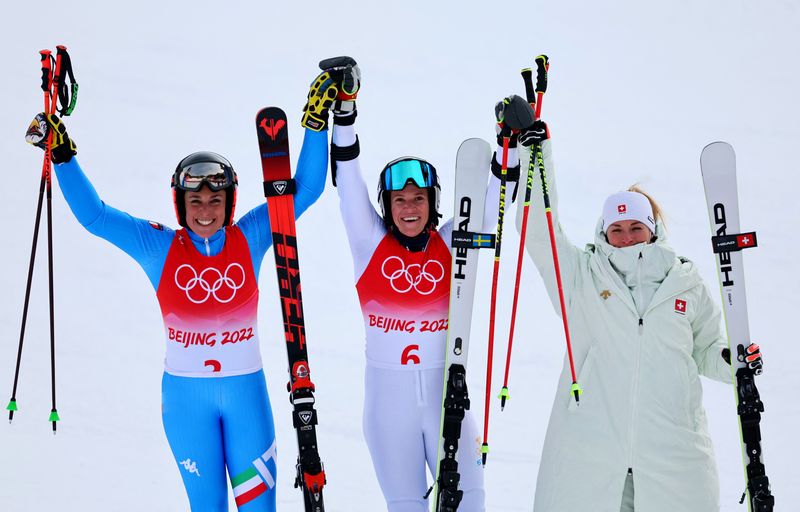 Italy’s Federica Brignone took the silver medal and Switzerland’s Lara Gut-Behrami the bronze after defending champion Mikaela Schiffrin was among 19 racers who failed to finish their first run https://www.reuters.com/lifestyle/sports/alpine-skiing-shiffrin-crashes-out-giant-slalom-2022-02-07s.

Hector, this season’s World Cup leader in the discipline, was fastest down the course dubbed “The Ice River” in her first run and posted a combined time of 1 minute, 55.69 seconds, to finish 0.28 seconds clear of the experienced Brignone.

The Swede held her nerve despite the race being halted for about 15 minutes before she started her second run, after American Nina O’Brien crashed near the finish line.

“Crazy. I’m so proud, I can’t put it into words,” Hector said. “I really tried to push it and give it all I got. It’s just amazing.

“I don’t know how to describe (my emotions). It’s been so much all day. I’ve been so nervous. It’s so much feeling, it’s crazy. It’s for sure a lot of joy.”

O’Brien was treated by medics in the finish area before being carried off on a stretcher, with a U.S. team spokesperson confirming that she was “alert and responsive”.

Brignone, appearing at her fourth Olympics and the bronze medal winner in giant slalom in Pyeongchang, said winning the silver was a dream come true.

“(It means) a lot,” she said. “Four years ago I was third, and before coming here I said if I come back with one medal that would be a great dream for me. Doing it at the first race, it’s amazing.

“I was waiting and waiting and I said ‘oh my God, this is so long’. But in some way I was calm. I knew I just had to ski, I was thinking about my skiing, and when I arrived to the gate I said, ‘it’s just ski racing’.”

O’Brien was not the only skier to lose control on a day that served up plenty of spills.

American Schiffrin failed to negotiate the first run and 11 skiers, including O’Brien and French hope Tessa Worley, crashed or missed gates in the second, although O’Brien was the only one seriously injured, with a Reuters witness reporting she went down hugging her leg in the finish area.