Olympics-Ice hockey-No medals for U.S. or Canada after quarter-final flops 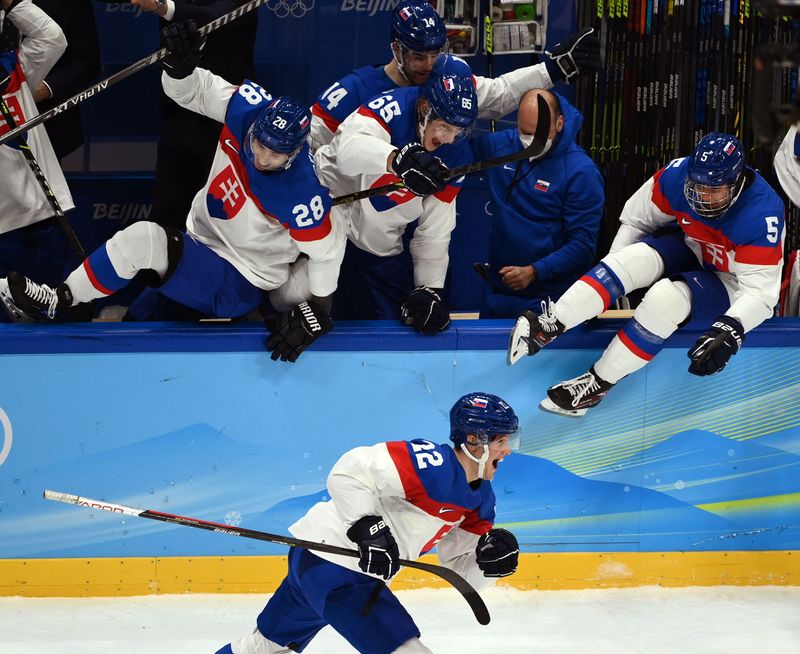 BEIJING (Reuters) -Canada and the United States, once hot favourites to battle for men’s ice hockey gold at the Beijing Winter Olympics, will watch on television or from the stands after quarter-final disasters sent them crashing out of the competition.

Action at the National Indoor Stadium on Wednesday began with a stunning upset and ended late in the evening with a surprise.

Slovakia started the day by pulling off the shock of the Olympic tournament when they beat the U.S. team 3-2 in a shootout to reach the last four for just the second time.

The day ended with Canada, gold medal winners in two of the last three Olympics, shut out 2-0 by Sweden in a rematch of the 2014 Sochi final.

The ROC will now face off against the Swedes, while Friday’s other semi-final will see Finland try to end Slovakia’s storybook run.

The dual North American exit is not nearly as shocking as it would have been had the National Hockey League not decided to pull out of the Beijing Games after a COVID-19 surge forced the postponement of over 100 NHL games.

Before the pandemic robbed Beijing of the world’s best players, Canada and the U.S. had been expected to arrive in China with glittering rosters packed from top to bottom with NHL All-Stars ready to go for gold.

But with rosters quickly cobbled together from colleges and European and minor leagues, for the first time since the 2006 Turin Olympics there will be no North American teams in the last four and the medal hunt.

Canada’s hopes were dashed when Lucas Wallmark broke open a scoreless contest midway through the third period, fighting off a defender and ripping a wrist shot past Matt Tomkins.

With Canada pulling Tomkins in favour of an extra-attacker, Anton Lander scored into an empty net to seal the victory.

“It was a game we didn’t give up much,” said Lander. “Small plays make a difference and today we were on the lucky side.

“We believed and kept working harder, harder and harder and sooner or later the puck is going to bounce with you.”

After dropping their opening two contests, Slovakia turned it up a couple of gears in brushing aside 2018 Pyeongchang Games silver medallists Germany in the qualification round then upending the United States.

Slovakia has been led by 17-year-old Juraj Slafkovsky, who has had a sensational Olympics, topping the goal scoring table with five, including the opener against the Americans.

But it was Peter Cehlarik, the only skater to score in a nail-biting shootout who would clinch the win after overtime ended with the game deadlocked at 2-2.

After Cehlarik scored, the U.S. had one last chance to extend the shootout, but captain Andy Miele could not beat netminder Patrik Rybar and the Slovakia bench erupted in wild celebration.

Unbeaten in group play, the United States looked headed for the semi-finals in regulation, leading 2-1 entering the final minute. But Slovakia had pulled Rybar for an extra attacker and were rewarded with the equaliser by Marek Hrivik with just 44 seconds left to force overtime.

As half of the former Czechoslovakia, Slovakia was represented in several appearances on the Olympic podium. As an independent nation, it reached the semi-finals at the 2010 Vancouver Games but failed to medal, losing to Finland in the bronze match.

“It happened 12-years ago and now again I can’t wait to play in the semi-finals,” said Slafkovsky. “I was watching this but I was six years old and had to go to school or kindergarten.”

Finland notched first-period goals two minutes apart from Miro Aaltonen and Mikko Lehtonen and never let the overmatched Swiss back into the contest, with Marko Anttila, Iiro Pakarinen and Teemu Hartikainen also finding the back of the net.

The ROC have yet to get their attack into full gear but saw off gritty Denmark with a goal in each period.

Nikita Nesterov, Vadim Shipachyov and Vyacheslav Voinov scored for the ROC, while Frans Nielsen kept Denmark from being shut out.