The Conference of Champions, known formally as the Pac-12, hasn’t exactly lived up to its name in 2021, as no team has scraped the AP top-10 at any point this season.

Finding themselves on the periphery of the college hoops landscape, it will surely be an important few days out west, as only four teams —  Oregon, USC, Colorado, and UCLA —- currently find themselves in the field of 68.

The action kicks off Wednesday with a trio of games, as No. 8 Arizona State plays No. 9 Washington State, followed by No. 7 Utah and No. 10 Washington, and No. 6 Stanford vs. No. 11 California.

Here’s the rest of the Pac-12 bracket. 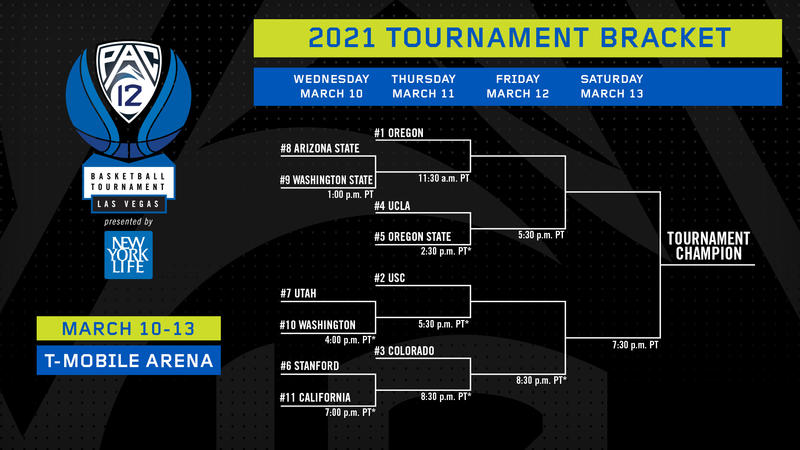 Despite their No. 1 seed, Dana Altman’s Ducks provide plenty of value for bettors looking for an angle in this tournament. At better than 3:1 at DraftKings (+310), Oregon’s path is clear as day. Avoiding a potential matchup with USC and Colorado until the final is huge for Altman’s team, as both gave the Ducks fits in the regular season.

A late-season surge catapulted this Oregon group to their second straight regular-season conference title, as they were able to rattle off wins in 10 of their last 11 en route to a No. 1 seed.

Oregon’s offense has been humming despite the loss of now Boston Celtic Payton Pritchard —  leading the Pac-12 in both offensive efficiency and three-point percentage.

The tandem of Chris Duarte and Eugene Omoruyi has been unstoppable of late, with the former emerging as one of the best shooters in the country —  hitting at a 44% clip from beyond the arc.

Their lack of size worries me a bit moving forward, but I always love an experienced, veteran team come March, as the Ducks feature five upperclassmen in their starting lineup.

One of the biggest disappointments in college basketball, the Cardinal never seemed to hit their stride in 2021.

However, their preseason buzz was no fluke, and this is a team as talented as any in the Pac-12, so I don’t hate the prospects of taking a flyer on Zhaire Williams and company at 15:1, especially if they can avoid USC in the semifinal.