Yesterday, it was announced that comedian and SNL performer Pete Davidson and  pop-star Ariana Grande are officially tying the knot. This is some surprising news as the couple have only been dating for just around a month now. The engagement news was announced yesterday and the two young love birds — both 24 — are currently celebrating their engagement in style at Disney World. Even though this is a textbook whirlwind romance, from the looks of things, Pete Davidson and Ariana Grande seem to be over the moon for each other. 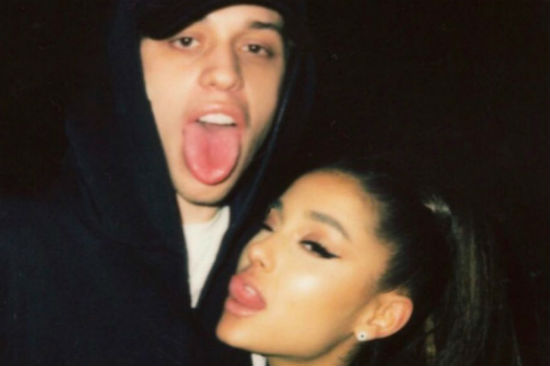 Both Pete Davidson and Ariana Grande had recently come out of some serious long-term relationships before finding each other. Davidson had been dating Larry David’s daughter Cazzie David for two years until they broke up last May and Grande had been seeing rapper Mac Miller for the same length of time.

The two have been showing love for each other on both of their social media accounts since they started dating including this photo Pete Davidson posted of the two getting close at Kanye West’s album release partying in Wyoming last week.

Ariana Grande has been sharing some affectionate posts on twitter as well some pretty hilarious instagram videos of her and Davidson enjoying their time in Dinseyland after their engagement announcement. You can watch those videos below via @ArianaGrandeUpdates twitter account: