As humans, there’s a strange optimism within us that believes we will eventually be able to pinpoint that one small thing that is responsible for the anguish in our lives. It could be your star sign, it has to be. Many of us, at this point, are at the end of our ropes searching for some sort of signpost that we can look to. Sometimes we just need an explanation, no matter how far-fetched, and we can fill in the gaps later. This new film, “The Sound of Silence,” starring Peter Sarsgaard, follows a scientist — a self-proclaimed “house-tuner” — who cures New Yorkers of their depression by eliminating unpleasing sounds emitted from their environments.

“It was strange and funny, and also seemed like something I could really relate to,” – Peter Sarsgaard 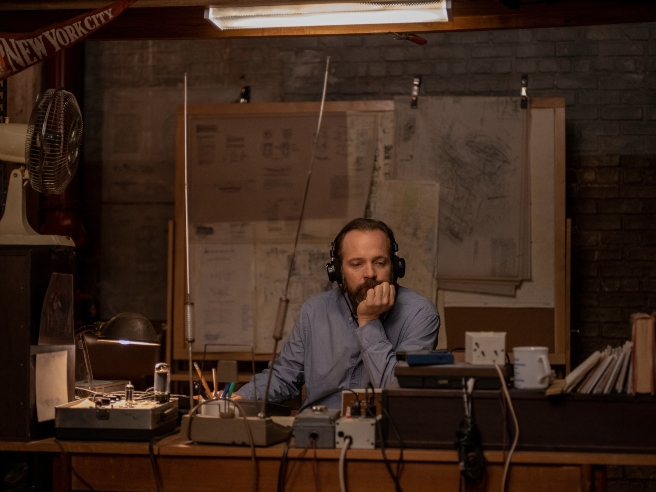 Peter Sarsgaard in “The Sound of Silence”. Photo: IFC

The scientist, Peter Lucien, is a man blessed with perfect pitch but also cursed with being too aware of the out-of-tune symphony that is New York. He spends his days dropping by apartments all over the city, with tuning forks in tow, advising his clients to toss out their toasters and other appliances to make way for the existing notes of their neighborhoods. Of course, this knowledge all comes with a price and it is a faucet he cannot shut off now that it has been opened. This a huge problem as he is introduced to a new client and possible love interest, Ellen, played by Rashida Jones.

The film was helmed by first-time director Michael Tyburski and based on a short film he had written with Ben Nabors. While the subject matter can ring close to home for those of us trying to make sense of our looming feelings of isolation and dread, the film is deeply funny for those who recognize that kind of desperation.

“It was strange and funny, and also seemed like something I could really relate to,” says Sarsgaard, on reading the script for the film. “I mean, I lived both in Vermont and in Brooklyn. Actually, I live in a part of Vermont that’s where I never ever hear a human sound. So I’ve lived in a very remote part of Vermont, and I lived in one of the biggest cities in the world. So this is something that I’m always confronted with, and it definitely changes my mood. Not just a lot of sound or a little bit of sound, but what kind of sound. I was also interested in this idea that people are trying to look for what ails them in the most peculiar places these days and I think throughout history. This idea that if something external that is upsetting the internal you, and of course — I mean not of course; maybe to some people, but for me — ultimately it’s something that’s inside of you that’s giving you problems. It’s not the rainy day or the construction outside, it’s the stuff going on inside of you. So I thought it was an interesting idea for the modern world and also for the city that I love and have lived in for so long where it’s obviously deeply rooted.”

To Tyburski, the complexities around Peter Lucien’s desire to help people and his plight of not being able to shut out the world around him was something he found deeply interesting.

“I like to think that the clients that go to Peter, they’ve tried it all. They’ve been around the block by the time they reach him,” Tyburski explains. “But he’s an interesting character to me because he’s working on this very personal thing of his, right? He’s trying to get published, he believes he’s discovered something. But at the end of the day, he also is interested in helping people. He’s got a very dry personality, and ironically somewhat can’t connect with people himself, but I like the idea that yeah, he ultimately does want to help people. He feels like he has an answer, and wants to go about doing that, and isn’t doing it for money or anything like that. Just to serve that purpose and also his own endeavors. But there’s also that theme of sometimes it’s the person who is giving help who needs the most help. And there is this interesting play that I like between him and the Rashida Jones character. That she ultimately seeks him out but becomes that role reversal, where she becomes a therapist in the end to the person she hired to help her, which I thought was interesting.”

As someone who has lived both a life of curiosity as well as a musical life, Sarsgaard could relate deeply to his character and the film, as our conversation veered off topic into a discussion about jamming with Ornette Coleman. But ultimately, he was thrilled to have worked with Tyburski, whom he believes is an exciting new voice in cinema.

“I’m always interested in working with someone who is a bright fresh new talent,” says Sarsgaard of working with Tyburski. “I mean really, really that is like a mission for me and when I met him and looked at what he had done and talked to him about this project and what his influences were and everything. He is a rarity in that he is a really pure artist. Obviously your first movie out, a lot of people would make a movie that was a version of ‘When Harry Met Sally’ or a horror film or something like that, but I really admired the guts that this guy had of making this his first movie out and it is so wild and unconventional. I have great respect for him.”

“The Sound of Silence” opens in select theaters this weekend.