Comedian Phoebe Robinson is fine with putting in some long hours. Most notably known as one half of the successful comedy duo “2 Dope Queens”, with her best friend Jessica Williams, Robinson has recently been lifted up to a new platform after the success of the team’s HBO show as well as two successful books including her New York Times Bestseller, “You Can’t Touch My Hair”. When I reach her over the phone, she is taking a break from her “Sorry, Harriet Tubman” standup tour and catching up on some projects and “very burnt out” in her brand new Tin Reparations production office. 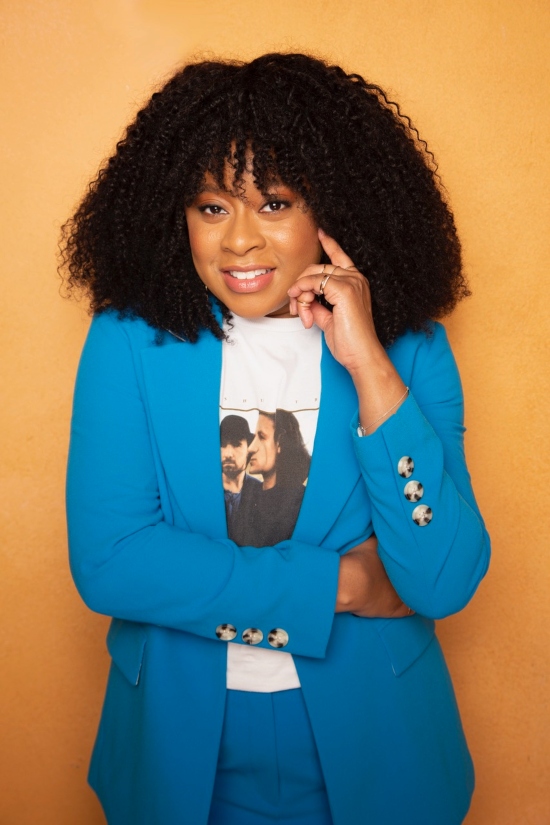 It was announced recently, that Robinson will be the host of her very own, as of now unnamed, talk show on Comedy Central in 2020. If you have seen her charming interviews on “2 Dope Queens” or her well-researched chat with Michelle Obama, it’s easy to understand that Robinson’s inquisitive nature and insightful disposition is the perfect pedigree for an inviting interviewer.

“I am an extreme workaholic. I don’t really have a lot of life skills or experiences. From major to minor things like I don’t know how to drive. I can’t ride a bike and I don’t know how to swim. I’m afraid of heights. I don’t know how to play instruments. I didn’t want to get tattoos in the past 10 years and just been too scared to do it. So I really enjoyed the ‘2 Dope Queens’ HBO format of sitting down with the celebs and not having an interview so that you are tied to a project that they’re doing,” says Robinson explaining her interview style for this new venture.

In the episode of ‘2 Dope Queens’ with Lupita Nyong’o, in lieu of a standard sit down discussion, Robinson and Williams instead had the Oscar-winner demonstrate her uncanny hair-braiding ability in front of a live audience. It made for a unique peek inside the actor’s everyday life, as well as for some hilarious television. It was from appearances like this one, that a lightbulb went on inside Robinsons brain.

“I just kind of wanted to sort of marry the interview format with a celeb teaching me how to do something that I don’t know how to do. And I think it’s a good way for the audience to learn something about me. And then also more importantly, see a celeb maybe do something that they didn’t know they could do or even I don’t know.”

Although Robinson is shaping up to have a busy two-to-three years ahead of her, in the midst of  pre-production on this new show as well other various projects with her production company, she is trying to take things as they come while reveling in the workload.  As for right now, Robinson has been focusing on making the “Tubman” special as good as it can be and enjoying the chance to be away from some of the irons she has in the fire.

“The title came from when Jess and I did ‘2 Dope Queens’,” Robinson explains of the tour’s title. “We would talk about a sort of topic of the day, whether it’s pop culture stuff or something more serious. But anytime, we talked about stuff that’s a little more lowbrow. We would always talk about how we were letting down various black figures throughout history… one day I said, ‘out of everyone we were disappointing Harriet Tubman the most.’”

In a way, finding that balance is kind of the perfect representation of Robinson. She is all at once intelligent, irreverent, charmingly oblivious, and hilarious. It’s something she hopes to get across as she performs at Bowery Ballroom this Thursday, October 10.

“It’s been just grinding it out and you know, getting this hour together and it’s been a lot of fun,” says Robinson of the current tour. “I just really want it to be really fun hour that people can sort of forget about whatever issues they have and just have a good time and laugh.”

Make sure to grab tickets to see Phoebe Robinson at Bowery Ballroom this Thursday, October 10.