PHOTOS: A look back at the Macy's Thanksgiving Day Parade through the years - Metro US
New York

PHOTOS: A look back at the Macy’s Thanksgiving Day Parade through the years

The Macy’s Thanksgiving Day Parade takes place every year in the heart of New York City marches 2.5 miles from 77th Street and Central Park West and ends at Macy’s Herald Square located at 34th Street and Sixth Avenue. The parade celebrates the official start of the Christmas season.

Each year, Macy’s introduces new floats and larger-than-life balloons to the parade while keeping the classics such as Ronald McDonald, Spiderman and various Sesame Street characters.

When was the first Macy’s Thanksgiving Day Parade?

The Macy’s parade began in 1924 but as you can imagine, it wasn’t as big of a spectacle as it has become today. In the early 1920s, the official name of the parade was the “Macy’s Christmas Parade.”

The main attractions of the first Macy’s parade were animals borrowed from the Central Park Zoo.  Elephants wearing large “Macy’s” banners walked the parade route during the parade. It wasn’t until 1928 that large helium balloons were used.

As the years went on, the parade grew in size and popularity featuring more floats, balloons, marching bands and performances each year. 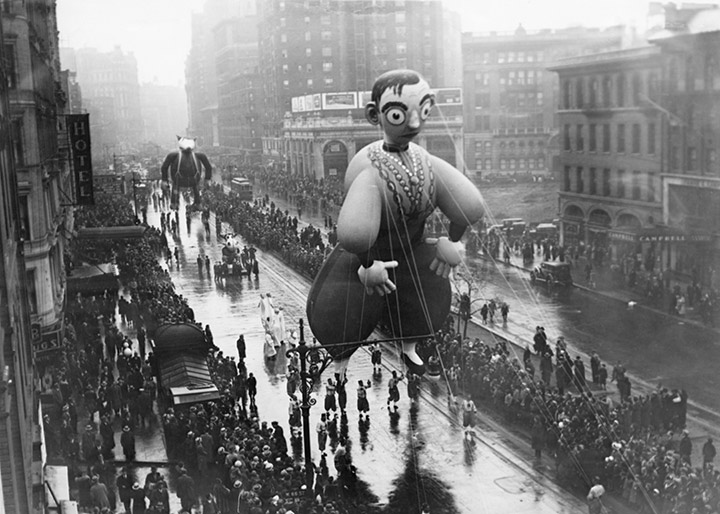 The Macy’s Thanksgiving Day Parade was canceled in 1942 because of World War II. When the war ended in 1945, the parade returned with nine new balloons and over two million spectators at the parade. In 1947 the parade was featured in the classic holiday film Miracle on 34th Street, followed by its first television broadcast on NBC in 1948.

During the 1950s characters such as Popeye and Mighty Mouse made their Macy’s Thanksgiving Day Parade debut. And because many people could watch the parade from the comfort of their living rooms without having to brave the cold, more people than ever had the opportunity to watch the parade.

When President Kennedy was assassinated days before the parade in 1963, there was a big question about whether the parade should continue that year. The parade was already canceled in 1942 because of World War II.

According to Macy’s members of the Kennedy family called the company and suggested the parade should continue.  By 1964, book illustrator and sculptor Manfred Bass began creating floats that used hydraulic systems in them to allow movement and bring them to life. 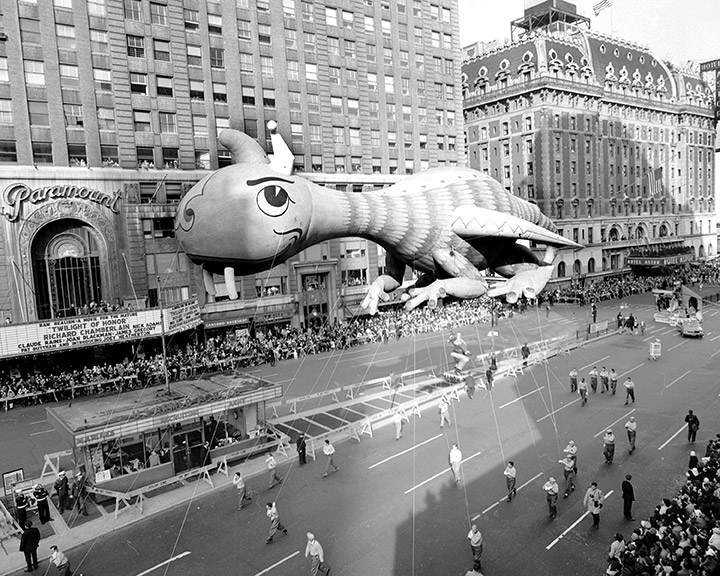 During the 1970s, big-name stars such as Dianna Ross and Evil Knievel highlighted the Macy’s Thanksgiving Day Parade and it was the first time major Broadway acts began to perform at the parade.

In the 1980s, the Macy’s parade featured a 100-foot long Superman balloon, making it the largest balloon at the time.  By 1984 the Macy’s introduced a new system to keep balloons flying on course. Macy’s employed trained balloon handlers to make sure the larger balloons stayed on course.

While characters such as Hello Kitty, Ronald McDonald, and Sponge Bob Square Pants are popular amongst today’s kids, parents and adults may remember a time when Mickey Mouse, Bullwinkle and Betty Boop floated through the sky.

Metro takes a look back at the iconic Macy’s Thanksgiving Day Parade through the years.