Rian Johnson returns from a galaxy far, far away with the fun murder-mystery, ‘Knives Out’ - Metro US
Entertainment

Rian Johnson returns from a galaxy far, far away with the fun murder-mystery, ‘Knives Out’ Writer-director Rian Johnson has had one of the great indie-movie success stories of the past 20 years. In 2005, he burst onto the scene with his confident paperback noir meets high-school drama “Brick” that not only announced Joseph Gordon-Levitt as a powerhouse actor, but Johnson as one of the most original filmmakers of his generation. From there, he released two critically acclaimed films, “The Brothers Bloom” and “Looper,” which both saw his profile rise considerably, but not to the height the writer and director would have ever expected. In 2017, Johnson was tapped by Lucasfilm to write and direct the next installment of the ongoing “Star Wars” franchise: “Star Wars: Episode VIII – The Last Jedi.” After all of the pressure that came with making that film, and all of the successes that came with it, where the hell can you go from there? For Johnson, he decided to get back to his roots with his new murder-mystery, “Knives Out,” in theaters this week.

“It felt really good to get back to the speed of, ‘let’s jump in there and make something fun.’” — Rian Johnson 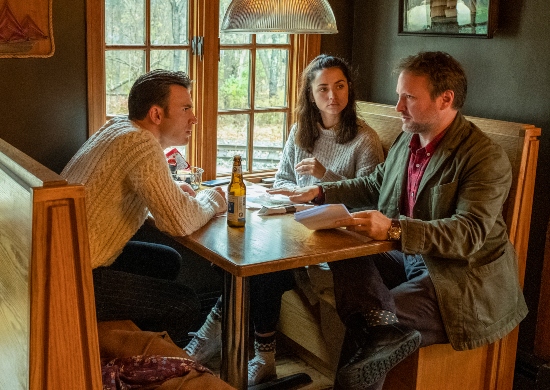 The highly entertaining ensemble film follows a private detective named Benoit Blanc, played by Daniel Craig, who has been hired by an unknown benefactor to investigate the death of an elderly and well-regarded crime novelist named Harlan Thrombey (Christopher Plummer). Thrombey had passed away late in the night in his home after his 85th birthday party which had been attended by his family: his real estate mogul daughter Linda (Jamie Lee Curtis) and her husband Richard (Don Johnson), Richard and Linda’s trust-fund-clinging rich kid son Hugh “Ransom” (Chris Evans), his Gwyneth Paltrow-like lifestyle guru daughter-in-law Joni (Toni Collette), his son Walt (Michael Shannon) who handles the publishing of his mystery novels along with his wife Donna (Riki Lindhome) and their right-wing Twitter troll son, Jacob (Jaeden Martell).

Also in attendance at the party, and suspected in the murder of Harlan, are Harlan’s housekeeper Fran (Edi Patterson) and his nurse Marta, played by the exceptional Ana de Armas. Marta’s character is the heart of the film and we follow her as she tries to make sense of this “whodunit” along with Blanc and the two local detectives on the scene, Detective Elliot (Lakeith Stanfield) and Trooper Wagner (Noah Segan).

When I speak to Johnson over the phone, I ask him if writing “Knives Out” felt like getting back to his roots after such a large undertaking with “Jedi” and the many expectations surrounding it.

“One thing that was similar that did feel nice was coming back to making a movie very quickly,” says Johnson. “With this film, I sat down to write it last January — January 2018 — and we had wrapped the movie by Christmas. It happened really, really quick. That was the biggest contrast with ‘Star Wars,’ actually. ‘Star Wars’ was an amazing experience, but it took four years to make one movie. It felt really good to get back to the speed of, ‘let’s jump in there and make something fun.’”

“For me,” he adds, “it’s always hard to describe how the experience of doing ‘The Last Jedi’ was. That didn’t feel like a limiting factor with it. Really what I was tapping into was my connection with it going back to when I was 5 years old. It’s been such a part of my heart for all of my life, basically. The personal side, that aspect of it is the thing that you’re really tapping into when you’re writing. Which, hopefully, that’s the same with any movie. With [‘Knives Out’] it was like that but with all of the stuff I loved about Agatha Christie and [her character] Hercule Poirot. With that, it’s strikingly similar.”

The love of Agatha Christie’s seminal mystery novels such as “Murder on the Orient Express” run through the film, and Craig’s performance as Blanc creates a character that you can’t help but be captivated by and to root for. I ask Johnson if he hopes to partner up to solve more foul-play murders with Craig in the future and if playing with this genre could lead to more ensemble films down the road.

“I don’t want to get ahead of myself, we’ll see how this one does! If this one does well, it would be a thrill to get together with Daniel every few years to do another one of these,” says Johnson. “You can see with Agatha Christie’s books,  the mystery genre is so malleable. You can do so much with it. The idea of totally shaking it up the next time and doing something very new but still in this mode with that same character who Daniel and I had so much fun with. I think Daniel had so much fun making that character. Yeah, I’d do it again in a heartbeat.”

While this film does have the feel of a classic mystery, part of what tears apart the Thrombey family in the wake of Harlan’s death — aside from his vast fortune in limbo — is that many of them hold political opinions that are at the core of what many of us will be trying not to argue about while clenching our teeth during Thanksgiving dinner this year. In fact, the only thing that brings them together is their pursuit in trying to figure out who will benefit the most once the truth is revealed.

“For me, that was the interesting thing about this,” says Johnson of the film’s timely political musings. “Drawing across the spectrum, from right to left and then really digging into the very human thing that’s driving each of them which is something that they consider to be there’s is threatened. And the very human thing of how you react to that kind of thing. When you’re scared of losing something you think is yours. We hope this movie has a light touch with it. First and foremost, it’s a really fun murder mystery. But, it does have these layers and it definitely does have a perspective of what’s going on.”

Watch the trailer for ‘Knives Out’ below…