The second season of The Handmaid’s Tale — premiering Wednesday, April 25 — first and foremost explores freedom: What is it, really? And does the fighting stop once you get it? The definitive answer in the world of Gilead is no — even when you’ve escaped the oppressive republic, like June’s best friend Moira, as played by Samira Wiley.

Wiley, by the way — who is most famous for her role as Poussey in Orange is the New Black — is as genial and genuine as you can imagine. And super proud of her latest role: role model. “I definitely feel like visibility is an incredibly powerful tool,” she says over the phone. “To realize that because I am who I am and somehow now by the grace of God I have a voice and a face that people recognize… It’s a blessing.”

We chatted with the 31-year-old about freedom in the world of Gilead, the series’ unmistakeable similarities with slavery and being considerably more diverse than the source material.

Moira struggles with her identity this season. She can’t go back to who she was before, but she doesn’t know where she’s going either.

[Identity] is a really big question for Moira this entire season. She’s just escaped to Canada [and] it’s set up to be this wonderful transition: she’s in this new country, she can do whatever. But it’s scary. She doesn’t know anyone here — she doesn’t even know who she is in this world. In Gilead — even though it was a horrible, horrible place — she was there for so long. It was like the devil that she knew. But in Canada, it’s sort of like, “Well who even am I when I’m here?” [And] there were questions I had [as Moira]: “Do I try to go date someone? Do I try to be a normal person? Do I even try to act like I’m normal at all?” Because everybody knows this ain’t normal.

Freedom doesn’t necessarily solve her problems. Instead, it seems to brings her a new slate of them.

We know her as this hard, bad-ass, amazing woman who can do anything. But really she’s become fragile. She realizes she can’t shake Gilead, she can’t get it off of her. She’s even having to resort to calling herself Ruby, from that time, because she literally doesn’t even know who she is. And not only that, but who she wants to be. I mean, can you imagine saying, “You can’t have anything, you’re just locked up in this room,” and then all of a sudden you cross the border and you can have anything that you want? It’s too much for her. And she struggles with where she fits in this world. 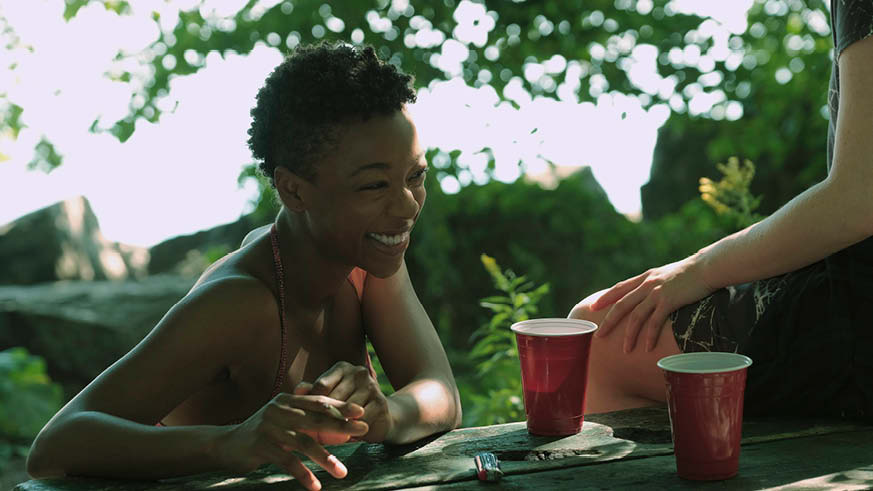 The similarities to slavery — especially this season — are really obvious. Some argue that The Handmaid’s Tale is an erasure of slavery, a watered down version that focuses primarily on white women, although the series as a whole is diverse. What do you think of that criticism?

I do think there’s some validity to [those] questions that are being raised, in terms of how [slavery] fits into this world. And to be honest, I don’t have all the answers for that. I know that I’m happy that we have to figure out how to make this work, because we don’t want to make a television show that’s a whole bunch of white people and no black people exist. But in terms of me being an actor and wanting to make this fictional world make the most sense, we have to answer these difficult questions as well. And I know that I don’t have the answers for all of them.

In listening to you, my head seems to be in the same place as you. I don’t totally understand [how we fix it], but it’s just a conversation. It’s something that we need to talk about and I’m glad that people are talking about it. And it’s something that I’ll continue to talk to the creators of the show about as well.

It’s hard because while I want to see the similarities acknowledged on screen, I’m also glad it’s a diverse series.

The book is a completely white world. If we were sticking to exactly what Margaret [Atwood] did in the book, I wouldn’t be a part of this show. But Bruce Miller, who is the creator and showrunner, said he didn’t want to make a show like that. The intention was to make a show [where the world] looks like what the world really does look like. We don’t want to make a show with all white people, you know what I mean?