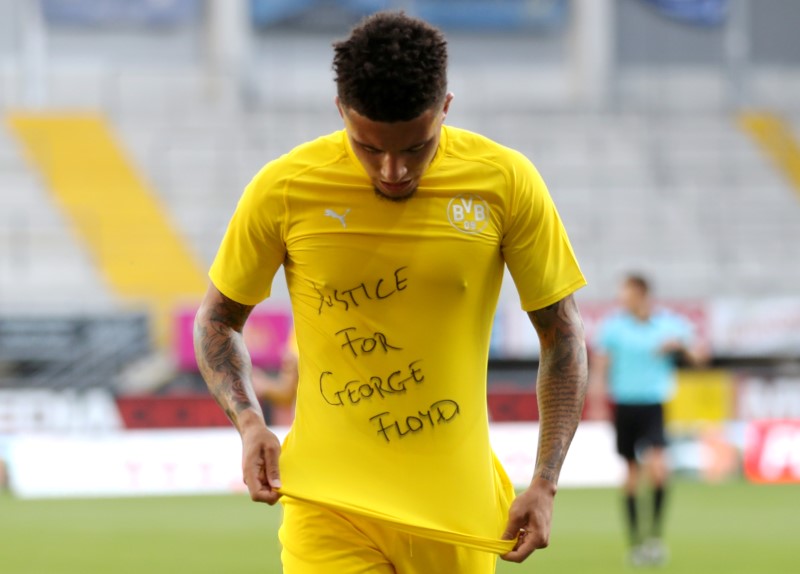 FILE PHOTO: Dortmund’s Jadon Sancho celebrates scoring their second goal with a ‘Justice for George Floyd’ shirt, as play resumes behind closed doors following the outbreak of the coronavirus disease

(Reuters) – Borussia Dortmund winger Jadon Sancho was not booked for his protest against the death of American George Floyd by a policeman but because he removed his shirt during the game, the German Football Association (DFB) clarified on Monday.

Sancho removed his shirt during a goal celebration to reveal an undershirt with a message “Justice for George Floyd” — an American black man who died in Minneapolis after a white policeman knelt on his neck.

While Sancho was booked by the referee, his team mate Achraf Hakimi was not and the DFB said it was because the Moroccan did not remove his shirt and only lifted it to show the handwritten slogan.

Law 12 written by soccer’s rule-making body IFAB states that players will be cautioned for “removing the shirt or covering the head with the shirt”.

“This is clearly defined as illegal conduct as per Law 12 and does not have anything to do with any political message,” Lutz Michael Froehlich, the sporting director of elite referees at the DFB, said in a statement https://www.dfb.de/en/news/detail/why-the-dfb-control-body-is-reviewing-justice-for-george-messages-216011.

“It is hardly possible for referees to register political, religious or personal slogans, messages or images during a game.”

However, the DFB said it was reviewing Sancho and Hakimi’s case as well as Schalke’s Weston McKennie, who wore an armband with the slogan “Justice for George”.

IFAB laws state equipment must not have any political, religious or personal slogans, statements or images.

“Part of these examinations is to ascertain whether during matches and on the pitch are the right place for these actions,” DFB vice president Rainer Koch said, adding that he respected and understood the players’ actions.

“The game itself should remain free of political statements or messages of any kind… There are of course opportunities before and after the match for these kinds of things.

“We’ll have to wait and see whether sanctions are required in these instances.”

Borussia Moenchengladbach’s Marcus Thuram took a knee to honour Floyd after scoring but the DFB said it was “open to interpretation” and was not against the rules.