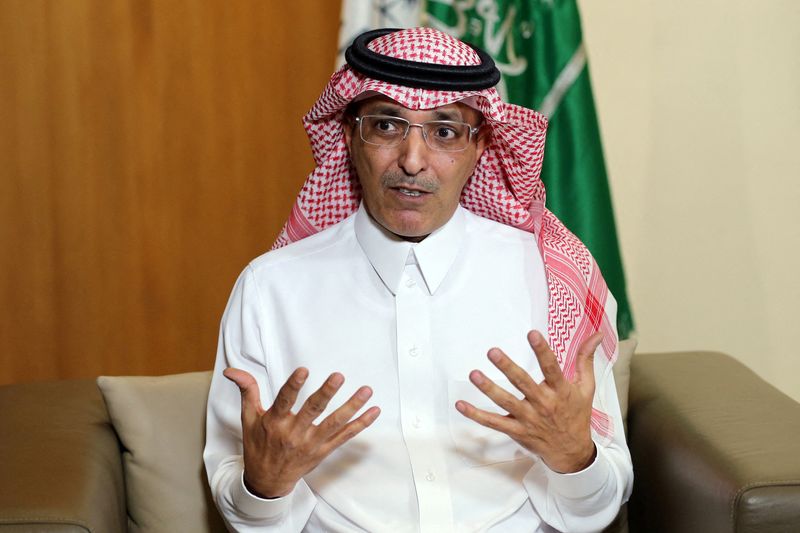 RIYADH (Reuters) -Saudi Arabia said on Sunday it expected to post its first budget surplus in nearly a decade next year, as it plans to restrict public spending despite a surge in oil prices that helped to refill state coffers hammered by the pandemic.

After an expected fiscal deficit of 2.7% of gross domestic product this year, Riyadh estimates it will achieve a surplus of 90 billion riyals ($23.99 billion), or 2.5% of GDP, next year – its first surplus since it went into a deficit after oil prices crashed in 2014.

“The surpluses will be used to increase government reserves, to meet the coronavirus pandemic needs, strengthen the kingdom’s financial position, and raise its capabilities to face global shocks and crises,” Crown Prince Mohammed bin Salman was quoted as saying by Saudi state press agency SPA.

The world’s biggest oil exporter plans to spend 955 billion riyals next year, a nearly 6% expenditure cut year on year, according to a budget document.

Riyadh plans to reduce military spending next year by around 10% from its 2021 estimates, the budget showed, a sign that the cost of the military conflict in neighbouring Yemen has started to ease.

Next year, the kingdom expects revenues of 1.045 trillion riyals.

“We are telling our people and the private sector or economy at large that you can plan with predictability. Budget ceilings are going to continue in a stable way regardless of how the oil price or revenues are going to happen”.

The largest Arab economy shrank last year as the coronavirus crisis hurt its burgeoning non-oil economic sectors, while record-low oil prices weighed on its finances, widening the 2020 budget deficit to 11.2% of GDP.

But the economy bounced back this year as COVID-19 restrictions were eased globally and domestically.

Saudi Arabia forecast 2.9% GDP growth this year followed by 7.4% growth in 2022, according to the budget.

The kingdom does not disclose the oil price it assumes to calculate its budget.

Monica Malik, chief economist at Abu Dhabi Commercial Bank, had estimated it was likely basing its budget on an oil price assumption that could be as low as $50-$55 per barrel, based on previous official revenue forecasts.

“There was a 15.7% increase in government revenue for 2022 vs the pre-budget. I think the assumption is now for a price of over $70 per barrel with the sharp increase in oil price”, she said.

Saudi Arabia plans more than $3 trillion in investment in the domestic economy by 2030, a target that economists have said will be tough to meet.

“The budget’s expected surplus in 2022 comes not only on the back of higher oil prices and production, but also on the back of scaling back COVID-related spending as well as continuing with transferring the investment burden to the state funds led by PIF”, said Mohamed Abu Basha, head of macroeconomic analysis at EFG Hermes.