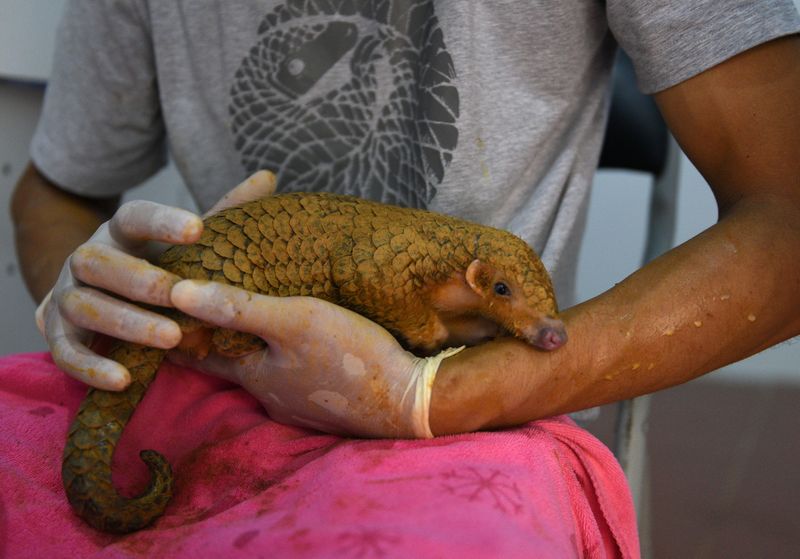 CUC PHUONG, Vietnam (Reuters) – Vietnamese conservationist Nguyen Van Thai recalls in detail the moment when, as a boy, he watched his neighbours dig up and kill a female pangolin that had curled up into a scaly ball.

It was an experience that changed a life he now devotes to protecting the critically endangered mammal.

“With this defence mechanism, she would have been able to defend against all of her natural predators, but not from a killing by human hands,” said Thai.

Raised near the lush forests of the Cuc Phuong National Park, the 39-year-old founded animal charity Save Vietnam’s Wildlife in 2014. Since then it has rescued close to 1,600 pangolins.

A lucrative illegal trade in Asia in body parts alleged to be able to cure everything from cancer to male impotence makes pangolins one of the world’s most trafficked mammals.

Pangolin parts can fetch up to $300 per kg, said Thai, whose group has set up task forces with rangers to patrol and find traps set by poachers.

“When we look at them, we think they are scary because they look like a dinosaur,” said Thai.

“But in fact they are really nice and shy, incapable of attacking or posing a threat to humans. We are the reason for their declining numbers that could lead to extinction.”

Thai’s manual on rescuing and caring for pangolins has been published in international academic journals and he was awarded the Goldman Environmental Prize this year.

But that pales into insignificance beside the work he and his team do on the ground.

“The most wonderful moment is (when)… we witness the rescued pangolins… slowly walk into the forest because the forest is their true home,” said Thai.