Nobody had a better 2018 than cannabis — there’s even a luxury dispensary on Fifth Avenue, and the New York Cannabis March finally went mainstream after five decades of advocacy. Will 2019 finally be the year that New York legalizes not just medicinal but recreational marijuana? The outlook is good, so it’s time you got a broader picture of what cannabis culture really is at the NYC Cannabis Film Festival.

Taking place on Sunday, Jan. 13 at Bushwick’s hub for all things alternative entertainment House of Yes, the festival takes the cannabis experience beyond smoking cartoon-size blunts with Cheech and Chong or going on psychedelic adventures fueled by White Castle burgers.

Festival founder Michael Zaytsev spends all year challenging the myths around marijuana as head of the community group High NY, hosting social and educational marijuana-themed events. The Cannabis Film Festival offers a broader window into who the “typical marijuana user” is and the many roles the drug plays in their lives.

“There’s this myth of the ne’er-do-well or the troublemaker, when in reality if you look at the actual data, it’s people of all backgrounds, ages, everyone, every community, every culture there are folks using this plant for a therapeutic benefit, so let’s stop pretending this is some kind of outcast, outlaw thing,” he says. 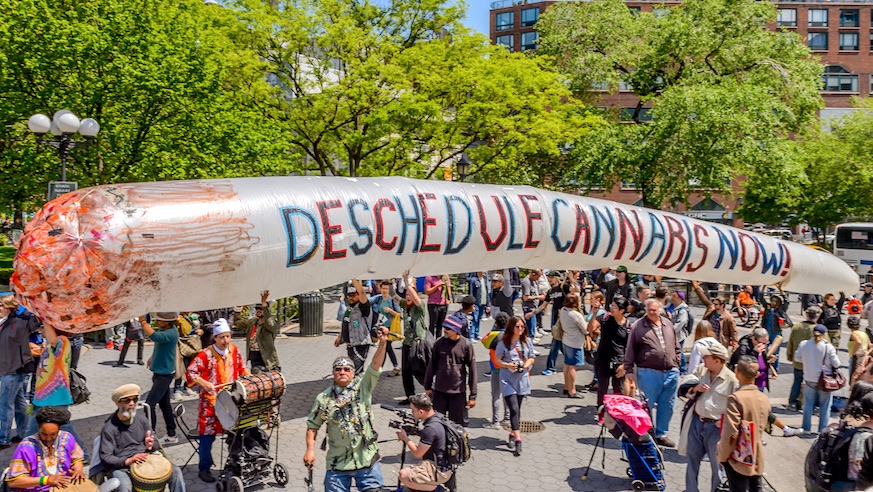 Several local and state politicians took part in the 2018 NYC Cannabis Parade, part of a growing trend of acceptance that the NYC Cannabis Festival hopes to fuel. Credit: Getty Images

‘Everyone had a cannabis-positive intention’

The festival has been going on since 2015, presenting short films and features submitted by independent filmmakers in genres ranging from comedies to documentaries, dramas and “hybrid” films meant to be experienced while in an altered state. “For most people, cannabis facilitates higher consciousness or joy or connection with whatever they enjoy doing anyway,” Zaytsev explains. “That’s why a lot of people in the weed community go to the movies high or go to concerts high or go out to dine after medicating, it’s to enhance the experience that they’re already seeking.”

A few of this year’s notable films include The Secret History, about the surprising link between the LGBTQ rights advocates and the movement to legalize medical marijuana; Bodega, about the role these community corner stores play in NYC culture and the impact of gentrification; the experimental film City of Dreams about the beauty of New York; and the Madrid International Film Festival-winning “stoner adventure comedy” Occupied Heart.

“I tell the filmmakers, ‘Pot can be part of the movie, it can be an essential piece of it or have a small part in it, or it can just fuel the production of the movie,’” says Zaytsev. “The unifying thing is that everyone had a cannabis-positive intention or wanted to do something that celebrates or honors the plant.”

The films are presented during four separately ticketed sessions ($30), which include Q&As with producers, directors and actors. While there won’t be cannabis sales at the event, attendees do get free popcorn and snacks to curb the munchies. And because the NYC Cannabis Film Festival is an unconventional event, movies will be judged in categories ranging from Most High and Best Journalism.

As for the future, Zaytsev has seen the benefits of legalization while living in California for a few years, where medical marijuana has been legal since 1996, and was optimistic it would be more widely embraced. “I was always of the belief that this would be legal everywhere eventually just because it makes sense,” he says. “A few years ago it seemed, pardon the pun, like a pipe dream, but there’s been such a dramatic shift.”

And yes, he plans to continue the festival after legalization. “My sponsorship price will definitely go up,” he laughs. “I would love for this to be as big as the Tribeca Film Festival in a few years.”