That’s a scary number, but it pales in comparison to how many people could die if a flu pandemic takes hold around the world.

“In the case of biological threats, that sense of urgency is lacking,” Bill Gates said during a discussion at Massachusetts Medical Society and the New England Journal of Medicine. “The world needs to prepare for pandemics in the same serious way it prepares for war.”

We have better treatments for the flu now, including the flu vaccine, but we’re much more mobile and pathogens can be spread easily. Some experts believe it’s only a matter of time before that happens — and it could take millions of people with it.

See how a flu pandemic could take over the world:

“Whether it occurs by a quirk of nature or at the hand of a terrorist, epidemiologists say a fast-moving airborne pathogen could kill more than 30 million people in less than a year,” Gates wrote in an editorial for Business Insider. “And they say there is a reasonable probability the world will experience such an outbreak in the next 10-15 years.”

And, like we experience with this year’s flu, there’s a good chance that new pathogens — either naturally or created in a lab — can form and spread that we’re not equipped to treat immediately.

“When the next pandemic strikes, it could be another catastrophe in the annals of the human race,” the Microsoft founder wrote. 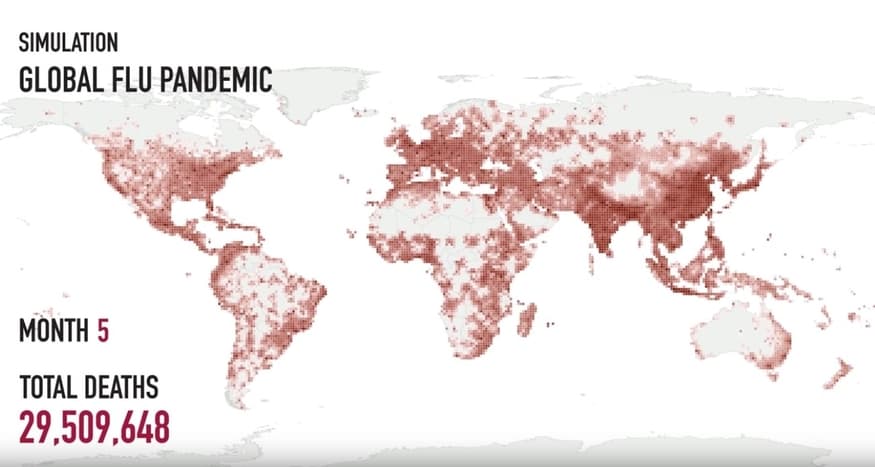 “Or it could be something else altogether. An extraordinary triumph of human will. A moment when we prove yet again that, together, we are capable of taking on the world’s biggest challenges to create a safer, healthier, more stable world.”