It’s not her first or last of the day. The 29-year-old behind Sugar Monster Sweets — who’s appeared on Cake Boss and won Season 3 of TLC’s Next Great Baker — will work through the night until 7 a.m., when it’s time to get the cake from her south Brooklyn studio to Manhattan’s Pier 36 for the competition.

“I live for this push and this energy; it’s so much fun,” she says. “Sure, I would rather relax and do my cake over a couple of months, but there’s something about that last minute pressure that I really live for.”

Her competition cake — cakes, actually, as Holt entered in two categories — began nearly a month ago. We got to step into her Carroll Gardens workshop to get an inside look at how her creations came together, from drawing board to the final touches. 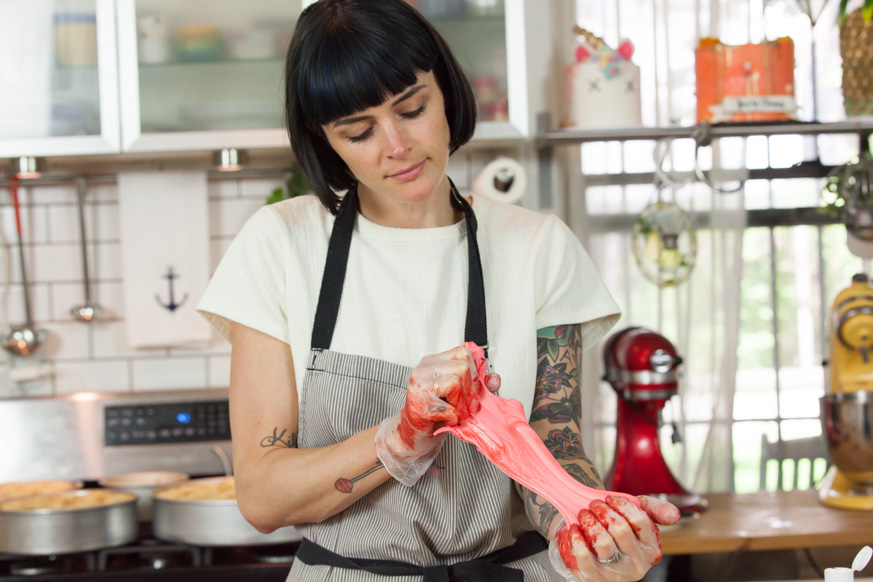 While she’s competed on television, including Chopped, Holt is new to the cake show circuit. “When you win a cooking show, sometimes you’re not taken seriously on the street,” she says. “Last year was actually my first real cake show. I worked those shows a lot doing demos, so I would see everyone else competing and look at their pieces and think, ‘Why am I not competing here?’ Competition is fun, it’s healthy and it keeps you on your toes. And it’s really good bragging rights, too.”

This year’s NY Cake Show theme is Broadway, as the event fell on the same weekend as the Tony Awards. Holt got to pick the show she wanted to use as inspiration (no duplicates are allowed in the same category). “I chose ‘Kinky Boots’ — I’m really really attracted to the big red boot and knew that would be a cool, fun challenge.” She watched YouTube clips and Googled images from the show to pick out what parts of the production she could turn into design elements.

Though there are no specific height or number of tiers required for the Show Table category, “this is going on a 6-foot [diameter] table, so I can’t have a small, wimpy cake,” she says. “My cake board is 3 feet, so I have to make everything sized accordingly. This is a giant boot; it’s a full-sized boot.”

The rules are that everything on the cake must be edible and made only by her. Holt’s first step was the most tedious: “I started the sequins three weeks ago; that was the first thing I did because I knew they were going to take forever.” After making large sheets of red gelatin, “I started with a little baby hole puncher, then followed and centered the tiny ones with one that’s a little bit bigger.” She made a thousand of them, ending up with 46 rows of 15 on the tier of her cake inspired by Lola’s dress. 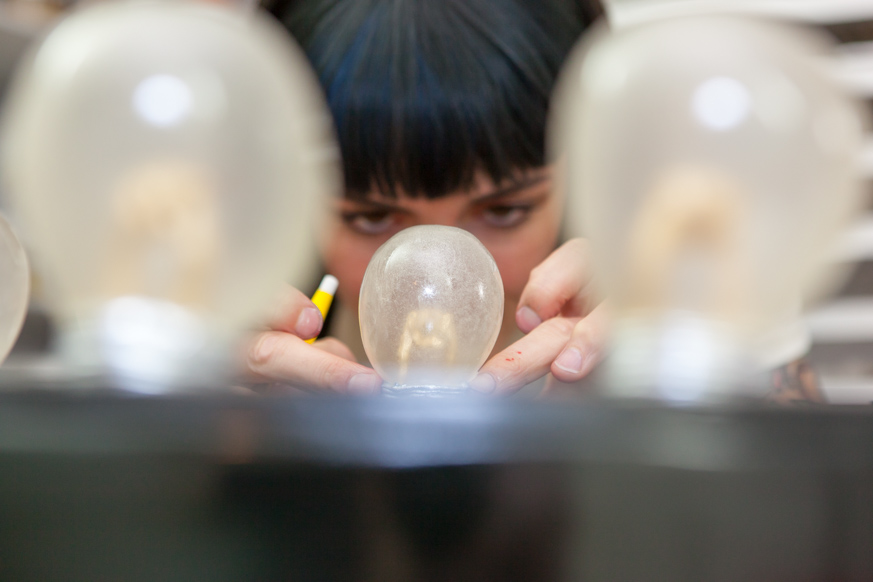 The ring of lightbulbs, inspired by the set design of Kinky Boots, were something she had to reverse-engineer. “That was just an idea that I had and I was like, ‘That would be really cool if this works,’” she recalls. The filaments were created out royal icing, then painted and assembled with the coil made of gum paste and gelatin bulbs, created by blowing up a balloon to get the shape and popping it after the gelatin dried. 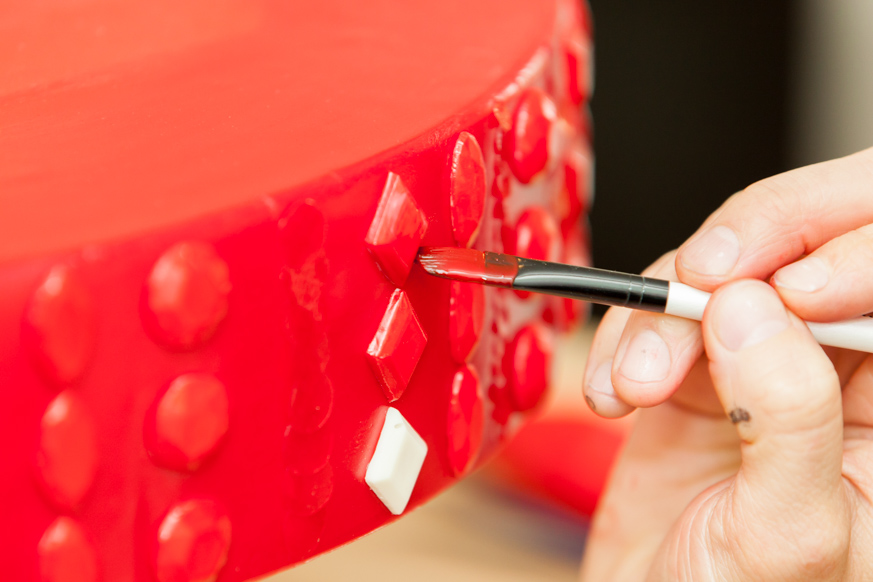 Holt grew up just outside of Atlanta and moved to New York for the first time at age 18 to model. “I just hated it,” she says. “I had to find a purpose and a fun direction in life, and the one thing I really loved doing was baking, so I decided to go school. Then I discovered decorated cakes and that really let me get my artistic fulfillment, and I just knew that’s what I want to do.”

In the end, Holt’s cake consisted of the fondant-covered cake board, a shoebox tier, a jeweled red tier inspired by Lola’s dress, a black tier for the stage and the life-size boot. All the math for her decorations checked out, but she ran into a little trouble with circumference. “I cut the lid [for the shoebox tier] too small, so you can still see the edge of the tissue paper, so I had to make an extra rim to seal that seam. When I did that, the ruffles from the tissue paper made the band not as straight and perfect as it should be.” She ended up remaking the lid — just don’t ask what time she was rolling out that new layer of fondant. 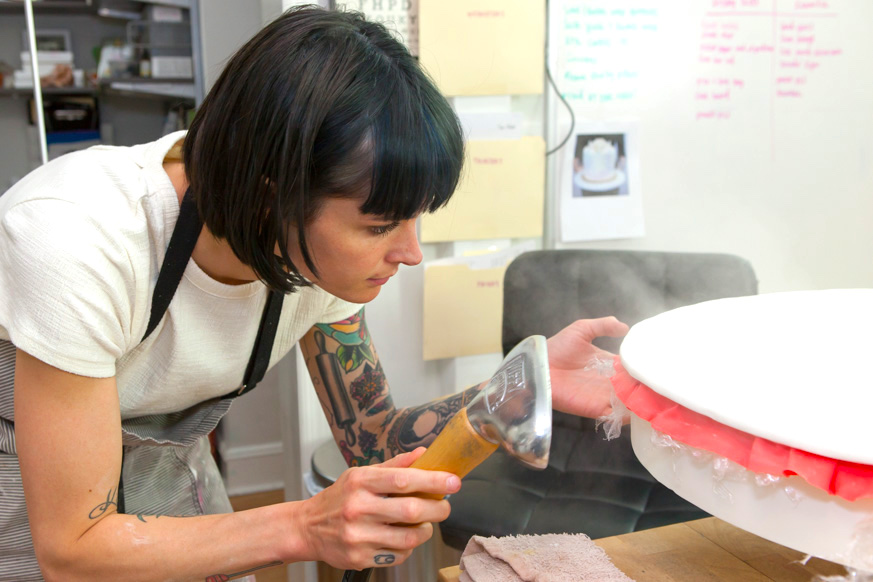 Show cakes have plenty in common with beauty pageant contestants. Holt uses a dress steamer to give her fondant a lustrous finish, each chocolate jewel is hand-painted, and everything must be decorated from head to toe, including her cake board and on-theme tablecloth. “If you don’t decorate your board, it’s huge points off.”

The Kinky Boots cake isn’t the only one she made for the show. As the winner of the Shoe Display category last year with a Pizza Rat stiletto standing on a pizza cake board, Holt was required to enter it again. “I was afraid that maybe mine was too weird,” she recalls. “I was so proud for stepping out of the box and diving deep into my own creativity and pulling something original out of my brain and being recognized for it.” This year’s entry is a roller skate on a disco ball board inspired by Xanadu.

One thing Holt didn’t have to do is actually bake a cake. Though there are edible categories like Buttercream and Cookies, the interiors of show cakes are generally Styrofoam. “No one’s eating this cake; it’s gonna be staying around forever,” she says. “They’re going to stay in the studio as our decorations.” When she does bake, she hopes you enjoy it but doesn’t need to witness it first-hand: “It hurts to look at clients cut through cakes that you pour 70 hours into.”

Besides Friday’s last-minute sprint, the cake came together in Holt’s free time, staying about an hour and a half each night after her regular orders were done. Even with the show deadline looming, she kept a commitment to attend a friend’s comedy show and went to a Yankees game with her boyfriend earlier in the week. “I’ve been there before when everything is work, and it doesn’t make me feel good. Greg has been really great at teaching me how to have balance between my personal and professional life. So I make it a point to get away as much as I can, leave at a decent time to have dinner together.”

The morning of the show, “we’ll be calling Uber with very strict instructions that if they hit a pothole, I’m coming in the front seat.” Also along for the ride: an emergency repair kit. She’ll assemble the cake on site. “After everything gets loaded in, there’s such a feeling of relaxation. Then you move on and look at everyone else’s work. Some of it’s like, ‘Oh, I’ve got this’, others it’s like, ‘Crap, I should’ve gone bigger!’ So there’s that anxiety, but you see your friends, hang out, then leave and come back, and hopefully you’ve got a ribbon.” 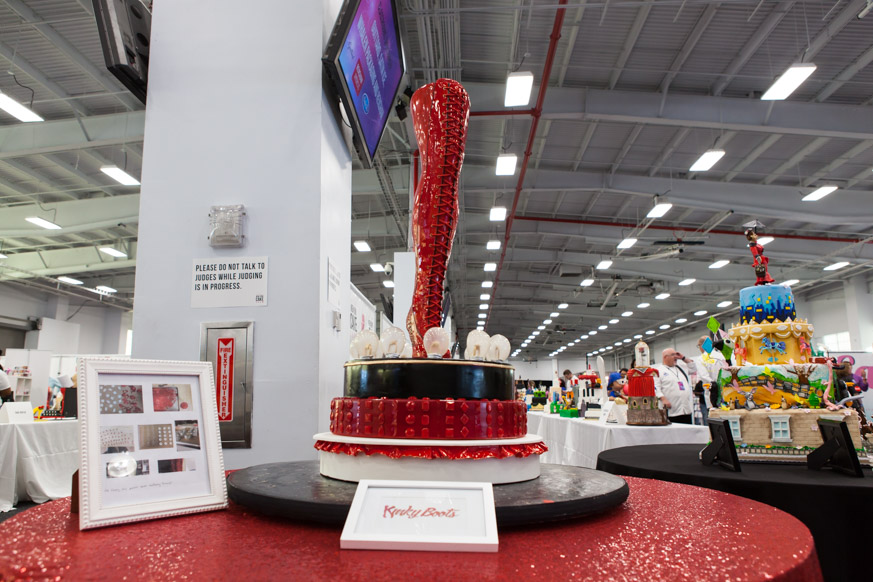 The New York Cake Show has 11 categories with five divisions: Master/Professional, Intermediate, Beginner, Student and Open. The cakes are judged not against each other, but on their own individual merits. “I don’t get the chance to do this every day; I don’t have orders like this. That would be a very expensive cake — I would charge at least $10,000 for this, maybe even $20,000. Which, no one would pay for that. I really get to push myself creatively to the next level and see what I’m capable of.” 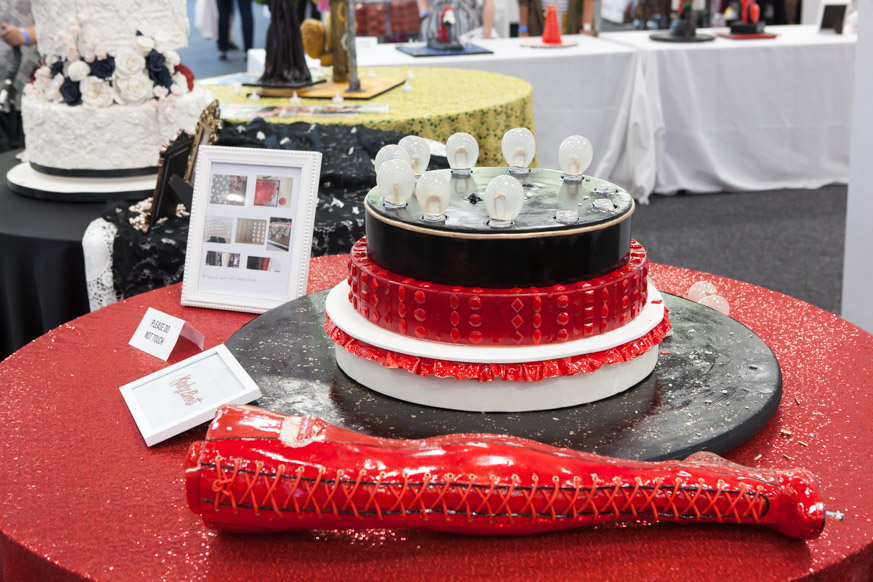 Holt’s cake arrived at the show just fine (and finished). But sometime during the afternoon of the first day, the boot proved too heavy for the screw holding it to the stage tier and toppled off, taking out three lightbulbs with it. “Someone must’ve hit the table or touched it,” she said. “Thankfully, the judges saw it already,” meaning the incident would not affect her score. 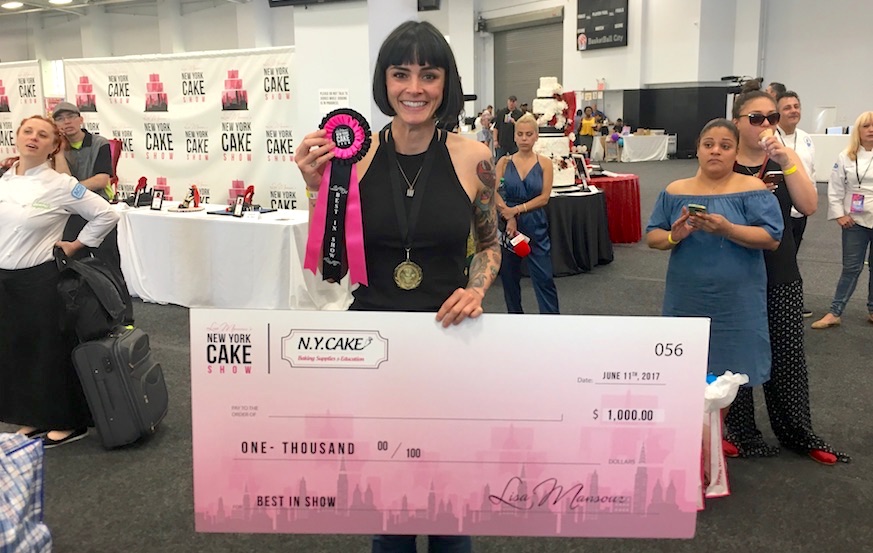 In the end, it was another successful year for Holt. Both of her employees in Sugar Monster placed, earning first in student-level Celebration Cakes and second in intermediate-level Wedding Cakes. Holt’s cakes took second place in their categories — but the Kinky Boots cake also earned Best in Show, which comes with a $1,000 cash prize.

“The rollercoaster of emotions I have experienced this past weekend, with my cake falling after judging, getting in first thing [in the morning] to repair it, it was crazy,” she says. “I am so humbled and honored. I had a vision for what I wanted to create and it translated in a way where it resonated with everyone there. I am proud of myself, and I’m so incredibly proud of my team.”