In music, it usually takes looking back to the past in order to break new ground. That is exactly what the Shen Yun Symphony Orchestra has been able to do by blending traditional Chinese instruments with the bombast of a western classical symphony orchestra. The innovative orchestra will be at Carnegie Hall this Sunday, Oct. 7, for a single performance. 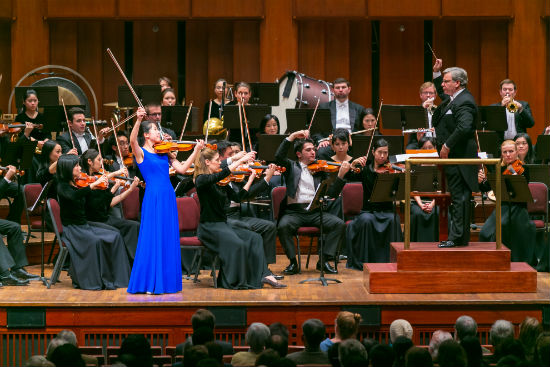 The Shen Yun Symphony Orchestra was formed in 2012 after audiences had clamored for the music of Shen Yun—the successful classical Chinese dance production—to be performed in a symphony concert after being blown away by the depth of emotion of the music and orchestration.  The Shen Yun Symphony Orchestra is able to create unique harmonies by using traditional Chinese instruments such as the plucked pipa and the two-stringed erhu, which is known for its ability to mimic the human voice.

With these versatile instruments guiding the melodies floating above the dense and textured layers of western orchestration underneath, the Shen Yun Symphony Orchestra has been able to create something brand new from the traditional Chinese classical music that has a history dating back nearly 5,000 years.

“It’s breathing fresh new life into ancient melodies,” explains Pingyi Lee Noto, the marketing specialist for Shen Yun Promotions International. “It’s a very special sound that people can experience. The western symphony orchestra focuses on the overall effect of the music ensemble while Chinese music emphasizes the expression of inner feelings through the exquisite sound of Chinese instruments. Shen Yun Symphony Orchestra is able to combine the strengths of both traditions and walk you through 5,000 years of history with this beautiful and harmonious sound.”

Sunday’s performance will consist of a balanced mix between both Western classics such as Sarasate’s Carmen Fantasy performed with lead violinist Fiona Zheng as well as Shen Yun originals like The Tang Dynasty Training Ground that mixes the pounding rhythms of drums with the staccato sounds of the pipa to put the audience right on the battlefield.

Here is footage of Fiona Zheng’s performance of Carmen Fantasy with the Shen Yun Symphony Orchestra from last year:

So what will concert-goers leave thinking after this unique performance? According to Lee Noto, the culmination of the power and delicate melodies will be nothing short of transcendent and transformative. Which, as she explains, is true to Chinese tradition.

“The word medicine [in Chinese] actually came from music,” she says. “Chinese people actually believe the sound can have healing power. The pentatonic scale the five sounds of Chinese music, correspond to the five elements and the five organs in your body.”

The Shen Yun Symphony Orchestra will perform at Carnegie Hall this Sunday, Oct. 7, at 2 p.m. For ticket information, head over to shenyun.com/symphony/tickets.