The thrilling rebirth of Daughters - Metro US
Entertainment

The thrilling rebirth of Daughters Nicholas Sadler never thought he would be in the position that he currently is in right now. As the guitar player and lead instrumentalist of the Providence, Rhode Island noise-rock band Daughters, they have been playing some of the biggest shows of their career all over the globe during a seemingly endless tour around the band’s 2018 album, “You Won’t Get What You Want.” While each night the crowds seem to be growing in size, it has come at the risk of the band’s exhaustion after leaving it all out on stage night after night.

“I’m very curious to see how far we can push the idea of Daughters. Especially with this unexpected year, it seems like we could end up anywhere,” Nicholas Sadler 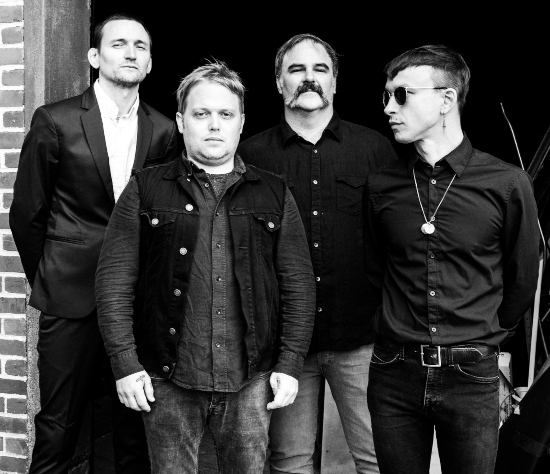 “Tour has been long and I’m ready to go home,” Sadler says with a laugh as I caught up with him before Daughters play in front of a packed show at the Austin venue Emo’s. While this has been the band’s new unexpected reality, Sadler understands that this relentless touring schedule is what it is going to take in order to make this their livelihood. Even if it takes a hell of a toll.

“I ‘woke up’  today after I pretty much didn’t sleep at all and went to go look in the mirror and was like, ‘What the f–k’ [laughs]. It’s hard to be out here with any complaints at all. They exist, there are things that you wish could be better. But at the same time we have this thing that literally hundreds and hundreds of bands all over the world would like to have for themselves. It’s this weird double edged sword and a bit of a Catch-22 where you’re just kind of like, ‘Oh my god, this is going to kill me!’ Then at the same time, tonight we’re expecting 1,000 people.”

Before the release of “You Won’t Get What You Want,” Daughters had gone through a winding road to get to where they are now. After years of touring as a shapeshifting and unpredictable power-violence act, the band had never really built up much of an audience. With the release of their, at the time, final self-titled third album in 2010 the band had decided to part ways. With this last album the band started exploring new sonic territory adding elements of post-punk with harsh noise and singer Alexis S.F. Marshall trading in his guttural shrieks for a more lyrical focused approach more akin to Nick Cave or David Yow of the Jesus Lizard. It was a new and exciting direction for the band that many thought would be their last dispatch. That was, until the all of the band members decided to get back together after a long period of not interacting with each other to see if there was anything more they could accomplish together.

“For me, I was attracted to the idea of repairing broken relationships with the members of the band, which is how we ended up meeting up at all,” remembers Sadler. “Within moments of meeting up, I don’t know why I didn’t expect it but looking back it was obvious it was going to happen, pretty much right away we were like, ‘Let’s make a record!’”

After playing some well-attended reunion shows, the band went to work on recording the songs that would become “You Won’t Get What You Want” based on some demos that Sadler created. The music on the record expanded on everything they were able to do with their previous work with punishing work by the band’s rhythm section — drummer Jon Syverson and bassist Samuel Walker — and Sadler’s nightmarish guitars. Marshall’s dark and poetic lyrics provide a narrative anchor for the record, making it an intense experience that stays with you long after the final notes of the closing track, “Guest House,” have spiraled out.

As the band set out to tour behind the record, they were shocked by how well the album was received by the press and the fans but also how many people were ready to see Daughters out on the road again.

“You could tell that on the internet, that something was happening. There was some sort of sustained or renewed interest in the group while we were away. I kind of knew something would happen, but I didn’t know it would be like this,” says Sadler.

The true testament, perhaps, to why the band has been gaining so much attention on the road is their absolutely ferocious live show. The band has never been more intense sonically and Marshall has become an absolutely dynamic frontman. At one moment, he could be prowling the stage like a madman and the other he could be standing on top of the crowd with the microphone jammed into his mouth. Having the band come back stronger than ever is something that Sadler takes endless pride in, but he may not quite understand the popularity.

“I think it has been pretty profound and I think to the point of, I only speak for myself within the group, it’s been totally confusing,” says Sadler. “I think if I were not in this band and I was watching what is happening, I would be the world’s biggest skeptic. Like, ‘This is the most over-hyped piece of s–t I’ve ever seen!’ I don’t really know how to reconcile that at all.”

But one thing is for certain, the band Daughters is very active these days. And with that, Sadler is excited to see where they can go from here.

“I’m very curious to see how far we can push the idea of Daughters,” says Sadler. “Especially with this unexpected year, it seems like we could end up anywhere. I feel very lucky because the world just needs to be open to the idea as well. I think the people who like our band understand that perhaps the next record is going to be very different than the one that we just did and no one seems overly put off by that. Obviously we don’t do it for the crowd anyways. But it’s a nice feeling to realize that almost 18 years into this band you are being accepted for who you are, at least creatively.”

Make sure to catch Daughters on tour.