A tunnel of color-changing arches that light up and play music as you walk through them are taking over a pedestrian plaza in the Garment District this winter. Opening Wednesday, Jan. 9 along Broadway from West 37th to 38th streets, Iceberg is part interactive public art, and part lesson about how humans are changing our fragile Earth. 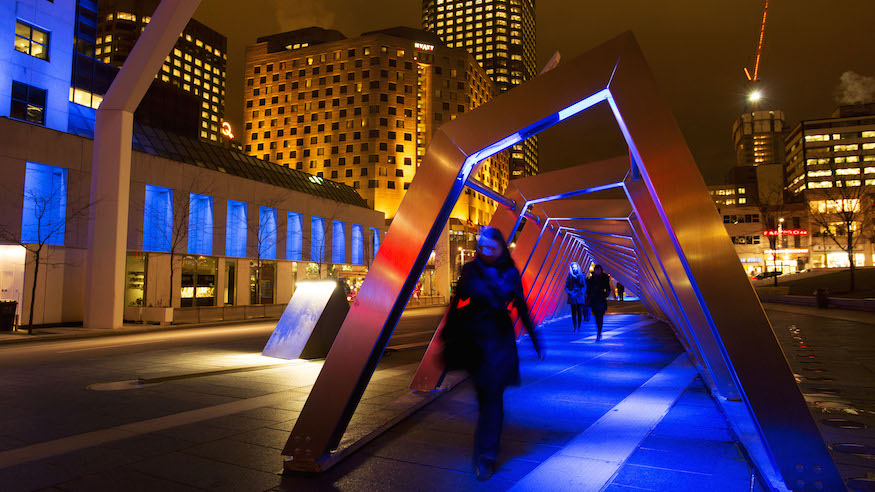 A musical Iceberg with a message on Broadway

To the casual observer, Iceberg will seem like an illuminated runway. The arches glow an ambient blue on their own, the metallic arches that make up Iceberg flash fuchsia lights in response to “warming up” as visitors pass beneath them — a musical light show you create simply by walking or running through it. And there’s certainly no more fitting place for an illuminated runway than the Garment District, which used to be the heart of the fashion industry in New York.

But like the giant glowing rabbits that took over Brookfield Place in 2016, the real purpose of the installation is a melancholy one. Iceberg has to do with global warming, representing the lifecycle of a glacier from when it breaks off into the Arctic Ocean to its slow melting while drifting south into warmer waters. The arches are divided into three tunnels representing different stages of the iceberg’s life, from the slow cracking sounds as the iceberg begins to break away to dripping water as it slowly melts before a symphony of chimes marks its arrival in the warmer waters of the coast inhabited by humans.

The sounds and lights of each ice tunnel change depending on how quickly you walk through the tunnels — just like human activity has spurred climate change.

“This is an astonishing installation that transforms Broadway into a gleaming, interactive experience for pedestrians, while reinforcing an important environmental message,” says Barbara A. Blair, president of the Garment District Alliance, which brought Iceberg to New York. “Iceberg is a thought-provoking yet playful piece that serves as a profound reminder of the seriousness of climate change.”

How Iceberg came to New York

Last winter, 7-foot-wide light cycles straight out of the movie Tron took over the same plaza, which visitors could power up by sitting inside them and pedaling. Curious to see what else they’re doing with light up in Canada? The 2019 Luminothérapie festival is going on now through Jan. 27.