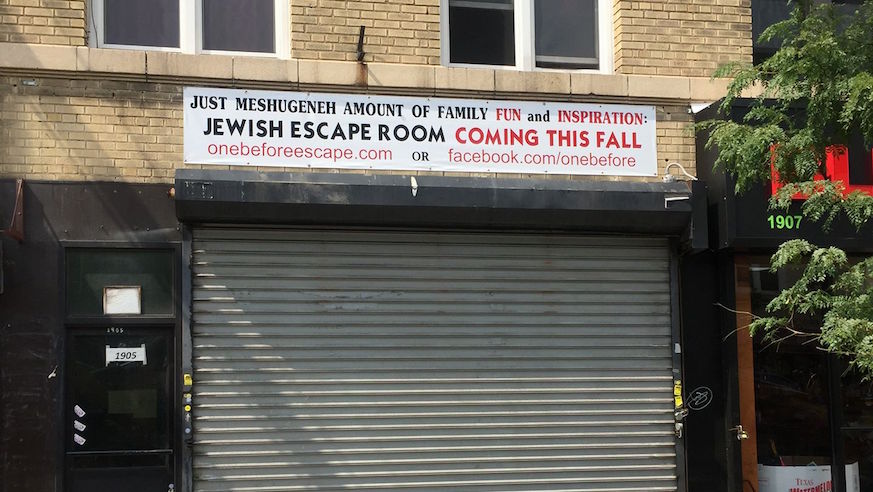 If running away from an angry mob sounds like something you’d want to do with your kids, there’s now an escape room for you.

A company called One Before is building what it bills as “Jewish escape room” offering a “meshugeneh amount of family fun and inspiration” at 1905 Ave. M in Brooklyn’s Midwood neighborhood.

“We aim to get you to experience the fusion of genealogy and an escape room: finding clues and connections to bring out the ultimate detective of Jewish past in you,” the company writes in its blog.

Except that experience takes the concept of an escape room too literally and hinges on time travel that takes you, among other places like Los Angeles and Ellis Island, to 19th-century Russia where you’ll be tasked with escaping a pogrom.

For those unfamiliar with the ugly history of being Jewish in Russia, a pogrom is a large, organized mob that would would torture and kill Jewish people and loot their homes in the 19th century. How is this meant to be a family-friendly experience, exactly?

The company bases its premise on a man named Arthur Kurzweil, who went searching for his Jewish identity through genealogy. “It evolves from research to becoming a question of identity,” the company’s blog explains. “We hope to emulate the sense of adventure, those perplexing and puzzling moments in our escape room — where there is never a guarantee of figuring it all out.”

That may be fine when it comes to knowing whether your great grandmother had a bat mitzvah, but a little ominous when considering the problems faced by the Jewish community in the recent past, not to mention the ones posed by the burgeoning neo Nazi movement.

It also entirely ignores the escapism premise of an escape room, provided of course that “meet the tzadik who turned ice to fire” is not a Game of Thrones reference.

“The pogrom is not a central part of the plotline,” writes Gamliel Beyderman, a rep for One Before, in an email to Metro. “Early 20th-century Jewish immigration from the Russian Empire is.”

He goes on to elaborate that the room is about tracing the ancestry of a California family back to the Ukraine. “The violent history that unfolds around these generations is a background of the room, but does not define the main theme.”

Then he revealed there’s a second escape room in the works at the same location, which is expected to open in the fall, that sounds equally problematic: “The second room we will open in the same space starts chronologically in the Warsaw ghetto right after the Holocaust, and moves 20 generations into the past.”

The location, still under construction, was first spotted by @samkimsamkim on Twitter, who posted a photo of it without comment.

The commenters, however, has had much more to say.

Before the concept became apparent, several people offered much less problematic ideas for a Jewish idea of a scenario to escape.

It’s actually just a woman that looks like your grandma sitting by the door saying “So soon, you’re leaving? I’ll be fine. Before you go, just help me fix this one thing on the facacta computer”

Mom wants to know when you’re getting married already, CAN YOU ESCAPE

Do you have to eat latkes and decide between sour cream, apple sauce, and plain?

Okay, but tell you what, though—a kind of puzzle room where you have to, like, solve a bunch of puzzles to activate the Golem of Prague has the potential to be an utterly kickass Hebraic Escape Room.

All of which is to say, there are a lot of funny and lighthearted things this could’ve been! But that’s not the escape room we deserve, apparently.

There were also the requisite puns and punchlines.

The hardest part is figuring out the combinations to the lox.

This is the “Springtime for Hitler” of escape rooms.

You can’t leave until you figure out a two state solution.

If only the Jews had been able to do anagram puzzles faster, the Holocaust would never have happened.

It didn’t take long for the conversation to get serious, namely that whatever the concept, the idea of a Jewish escape room has one pretty major fundamental flaw.

I suggested this as an option to my pal Dave, and this was his reply: pic.twitter.com/Q6HsWhIUKv

Next up, Escape The Room: Underground Railroad Edition?