Timeline of the Planet of the Apes: A Franchise Through the Centuries – Metro US
Movies

Timeline of the Planet of the Apes: A Franchise Through the Centuries 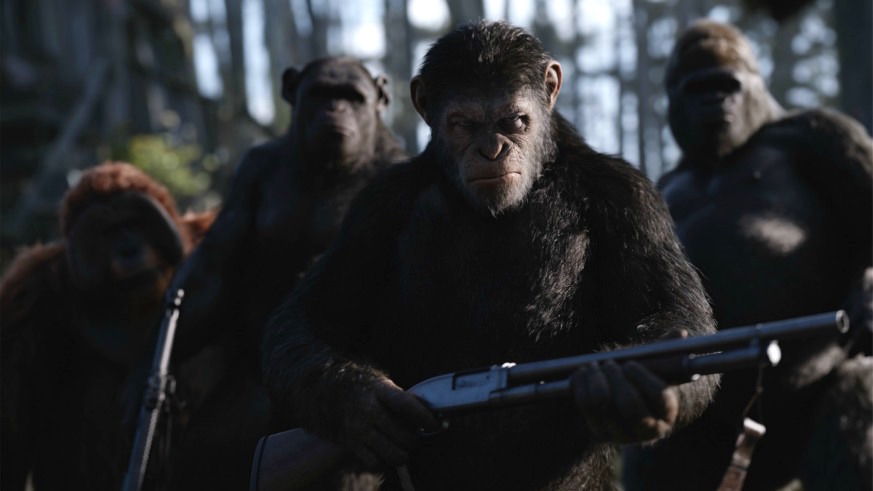 “War for the Planet of the Apes” arrives in theaters just shy of 50 years after the premiere of the original “Planet of the Apes.” The Charlton Heston classic spawned a cottage industry, whose largely Heston-less sequels spawned annual sequels, plus TV shows, plus a Tim Burton remake in 2001, plus a much more successful reboot that started in 2011.

The following timeline includes all of it (save the novels and comic spin-offs, otherwise we’d be here all day). The three movie franchises don’t quite connect; the new reboots don’t include astronauts inadvertently journeying to the future, and they ape revolution happens for a very different reason. Here’s the history, both onscreen and off-, of the cinema’s finest example of prolonged monkey mayhem:

1963: Frenchman Pierre Boulle, author of “The Bridge on the River Kwai,” publishes the novel “Monkey Planet” (“La Planete des Singes”), which would later serve as semi-loose inspiration for the film “Planet of the Apes.” Interestingly, the book’s ending is closer to the dumb ending of Tim Burton’s “Planet of the Apes.” (See: 2001.)

1968: The big-budget film “Planet of the Apes,” starring Oscar-winners Charlton Heston and Kim Hunter, plus Roddy McDowall — the latter two as talking chimps — becomes one of the year’s biggest hits.

1970: A significantly cheaper sequel, “Beneath the Planet of the Apes,” hits theaters. Heston reluctantly returns, but only if his part is small. He donates his pay to charity. The lead role goes to the sub-Heston beefcake thespian James Franciscus.

1971: “Escape from the Planet of the Apes,” the series’ third, establishes the franchise as unstoppable, despite decreasing budgets and box office. McDowall, who sat out “Beneath,” returns and doesn’t leave the franchise till its death in the mid-’70s. 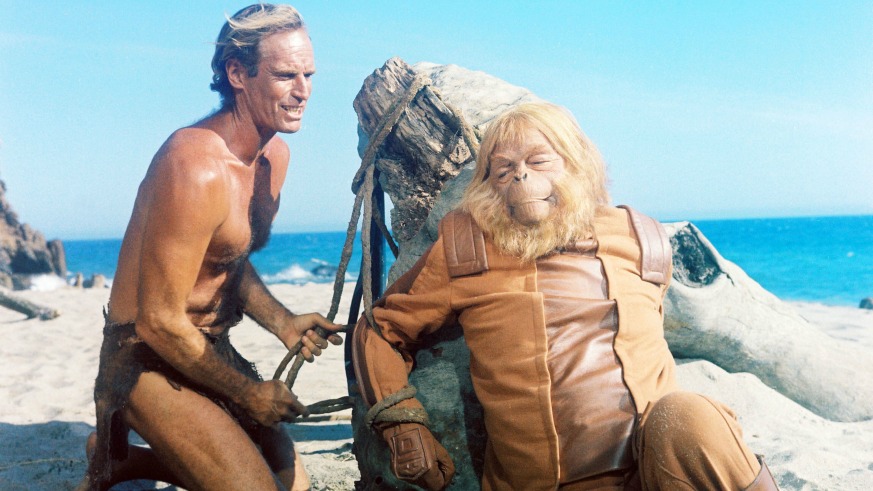 1972: “Conquest of the Planet of the Apes,” a still-cheaper fourquel, is released. Meanwhile, in the world of the original “Planet of the Apes,” Charlton Heston and crew get into hibernation for a trip that will take them light years away from Earth.

1974: One year after the death of the film series, the “Planet of the Apes” TV show begins. McDowall is the only major returning star, playing Galen, the third chimpanzee he’d play in the franchise (after Caesar in “Conquest”). The show lasts one season.

1975: The last hoorah of the franchise before its 2001 reboot, the cartoon “Return to the Planet of the Apes” suffers a fate similar to the live-action show.

1976: The human astronauts from “Return to the Planet of the Apes” take off on the mission that will take them to the future.

1980: The human astronauts from the “Planet of the Apes” TV show take off on the mission that will take them to the future. 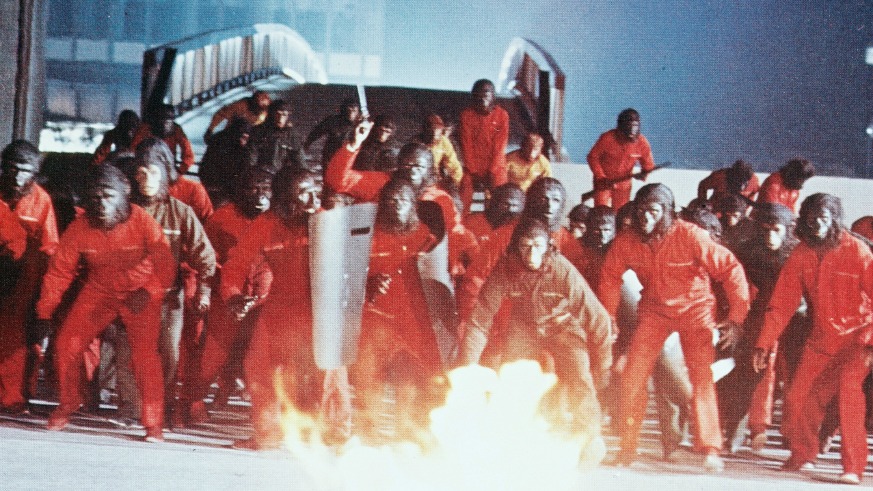 1991: In the world of “Conquest of the Planet of the Apes,” 1991 is a dystopian future where dogs and cats have gone extinct and apes have become slaves in a police state. Led by McDowall’s Caesar — son of the dead Zira and Cornelius — the apes successfully revolt against their human oppressors.

2001: Tim Burton directs the reboot of “Planet of the Apes,” starring Mark Wahlberg. It receives negative reviews but sturdy box office, if not enough to warrant a sequel. Burton says he’d “rather jump out a window” then do a follow-up. On the bright side, every snarky alt-weekly is thrilled after months of waiting to finally use the line “Marky Mark and Monkey Bunch.”

2013: In the world of “Battle for the Planet of the Apes,” 12 years have passed since the ape revolt, human society has fallen and what’s left of the humans try to reach a stalemate with the apes, led by McDowall’s Caesar.

2019: In the world of “Rise of the Planet of the Apes,” a smart chimp, Caesar (Andy Serkis), foments a revolution/prison break with chimps being experimented on by scientists. Humankind is largely wiped out by a supervirus.

2031: In the world of “War for the Planet of the Apes,” chimp-human relations have gone hairy. The supervirus that wiped out much of humanity has evolved, causing the survivors’ brains to regress into an infantilic state. They’re doomed. But they’ll go out fighting. A rogue Colonel (Woody Harrelson) has it out for ape leader Caesar (Andy Serkis), and has imprisoned as many simians as he can in POW camps, all while fending off fellow warrior humans who simply think he’s nuts.

5021: In the world of the Burton “Planet of the Apes” remake, Mark Wahlberg’s Captain Leo Davison crashlands on a planet of apes. We’re not sure if it’s actually Earth all along or what because the twist ending makes no sense.