Trump’s America: Why stop the pardons with Sheriff Joe? – Metro US
Today’s Debate

Trump’s America: Why stop the pardons with Sheriff Joe? 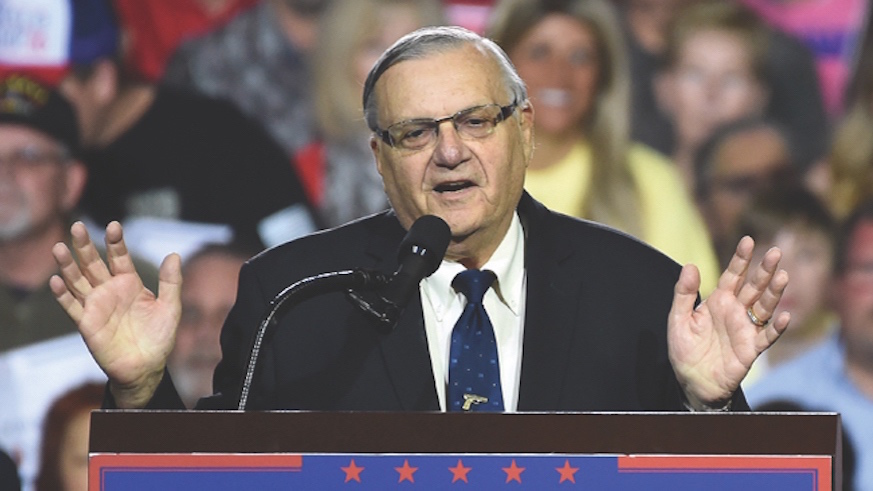 No, really. I’d like to be pardoned – wouldn’t you? Pardoned for crimes I’ve already committed, pardoned for crimes I am only now dreaming up. Mark my words: When it comes to Donald Trump’s presidential pardons, Sheriff Joe was just a practice round.

Jared Kushner, are you watching?

Flynn, Stone and Manafort – how ’bout you?

This president will keep on pardoning people – friends, relatives, staffers, supporters, cabinet officials, campaign aides – until he inevitably reaches the man in the mirror, who by then will need a pardon most of all.

As he has quickly learned, presidential pardons do not require an act of Congress, only the stroke of a pen. And what a terrible message this first pardon sends!

Arizona Sheriff Joe Arpaio first got famous for making his prisoners wear pink undershorts. That act of gratuitous humiliation was wildly popular with the nitwits who giggle over prison torture and police brutality, a demographic that very much includes our president. (“Don’t be too nice” to the suspects, he urged police officers on Long Island late last month.)

Over the years, Arpaio has shown insistent disregard for the rule of law and the U.S. Constitution, even as he railed against “illegal immigrants.” Abuse of power, misuse of funds, election-law violations, racial profiling, a staged assassination plot – there was almost no depth the tough-talking sheriff wouldn’t stoop to. Last month, he was found guilty of ignoring a federal court order to quit profiling Latinos during traffic stops.

Trump’s response to all that? Not pink underwear. A pardon even before sentencing day.

This is going over about as poorly as you would expect, as Republicans get bolder and bolder in separating themselves from an unpopular president. Paul Ryan, the cautious speaker of the House, made clear that he opposed a pardon for the racial-profiling sheriff: “Law enforcement officials have a special responsibility to respect the rights of everyone in the United States.”

Arizona’s two Republican senators, John McCain and Jeff Flake, spoke out too. When McCain tweeted, “@POTUS’s pardon of Joe Arpaio, who illegally profiled Latinos, undermines his claim for the respect of rule of law,” Jeb Bush piped in on Sunday: “John McCain is right on the mark.”

Metro columnist Ellis Henican is the author of a dozen books including “Trumpitude: The Secret Confessions of Donald’s Brain.” Follow him on Twitter @henican.