By Josh Smith and Hyonhee Shin
0
comments
Posted on August 23, 2021 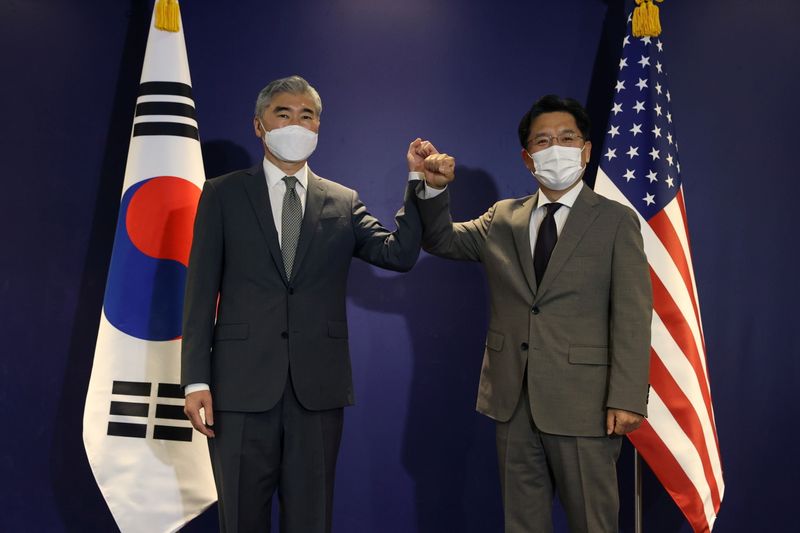 SEOUL (Reuters) -The United States has no hostile intent toward Pyongyang and is open to meeting any time and any place, Washington’s special envoy for North Korea said on Monday during a visit to South Korea.

Sung Kim arrived in Seoul on Saturday for a four-day visit.

The visit comes as a brief thaw in inter-Korean relations in July gave way to a new standoff over U.S.-South Korean military exercises that North Korea has warned could trigger a security crisis.

“The United States does not have hostile intent toward (North Korea),” Kim told reporters after meeting with his South Korean counterpart, Noh Kyu-duk.

“The ongoing (U.S.-South Korea) combined military exercises are longstanding, routine, and purely defensive in nature and support the security of both our countries.”

“We agreed to work together to resume dialogue with North Korea as soon as possible,” he said.

On Sunday Kim met with Foreign Minister Chung Eui-yong at the minister’s residence, where they discussed ways for a speedy resumption of the peace process on the Korean peninsula, a foreign ministry official said.

In an interview with KBS, South Korea’s national broadcaster, Kim urged Pyongyang to return to dialogue, saying Washington was ready to address its concerns.

“We are willing to address the full range of issues and concerns including those that are of importance to DPRK (Democratic People’s Republic of Korea),” Kim said. “Given the opportunity we will be able to make substantial progress.”

The U.S. envoy is expected to meet with Russian Deputy Foreign Minister Igor Morgulov on Tuesday in Seoul.

The nine-day joint military exercise began on Aug. 16, with silence so far from North Korean state media despite fears that the country could conduct a missile test or take other actions to underscore its disapproval.

North Korea has said it is open to diplomacy, but that the American overtures appear hollow while “hostile acts” such as the drills continue.

U.S. President Joe Biden’s administration has said it will explore diplomacy to achieve North Korean denuclearisation, but shown no willingness to ease sanctions.

The United States supports efforts to improve ties between the two Koreas and remains open to direct talks with Pyongyang, Kim said.

“I continue to stand ready to meet with my North Korean counterparts anywhere at any time,” he said.