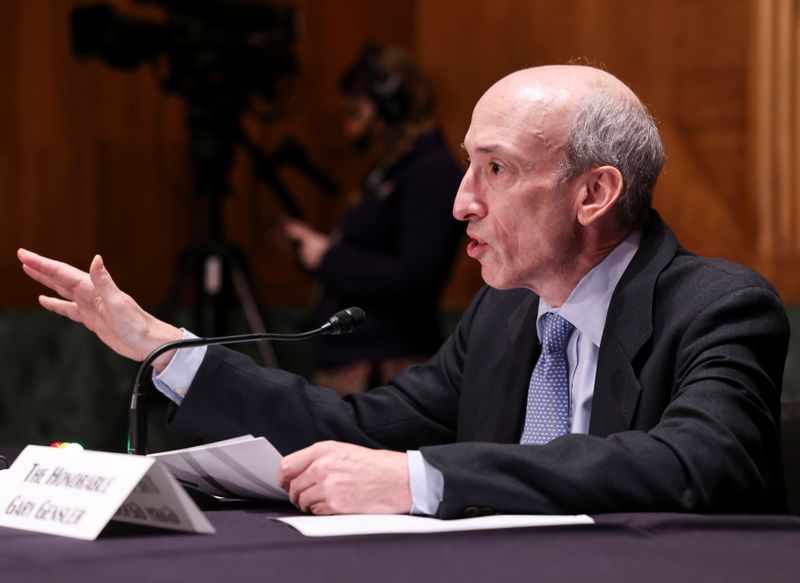 WASHINGTON (Reuters) -The U.S. Securities and Exchange Commission (SEC) is close to publishing a post-mortem of the GameStop trading saga in which retail investors on the Reddit social media site banded together to push up the video game retailer’s shares, SEC Chair Gary Gensler said on Tuesday.

Gensler said it is being reviewed by the SEC’s commissioners who typically sign-off on major policy decisions and reports. “It will be out shortly,” he said during his first appearance before the Senate Banking Committee as SEC chief.

While Gensler did not elaborate on what the report would say, it could have adverse implications for the retail brokers, hedge funds and clearing houses at the center of the saga which roiled Wall Street and sparked outrage from lawmakers.

The Reddit-fueled rally in January drove massive volatility in shares of GameStop Corp and other companies, prompting the post-trade “clearing” houses that guarantee trades to call for billions of dollars in extra collateral from retail trading platforms.

In response, several of them restricted trading in the affected stocks, sparking speculation among retail investors and lawmakers that the trading platforms had tried to protect hedge funds that stood to lose out if the shares rose.

In his testimony before the Senate panel, Gensler reiterated concerns regarding retail brokers’ trading and marketing practices, highlighted by the saga, which he said may reduce competition in the retail equity market and encourage consumers to place risky trades.

In particular, financial firms’ use of artificial intelligence, predictive data analytics, and machine learning to push customized products and boost revenue is a growing concern for the regulator, he stressed.

“We are living in a transformational time … Policymakers must consider what rules of the road we need for modern capital markets,” he told the lawmakers in his prepared remarks.

As head of the country’s top markets regulator, Gensler is under pressure from progressives to take a tough stance on Wall Street and disruptive new technologies while at the same time pushing Democratic priorities to address climate change and social injustice.

Since taking the top SEC job in April, he has pursued an aggressive agenda, overhauling corporate disclosures, cracking down on blank-check deals and Chinese-company listings, and calling on Congress to curtail the cryptocurrency market.

“You have already gotten to work for the American people, and you had your work cut out,” Senate Banking Committee Chairman Sherrod Brown, a Democrat, told Gensler in his opening remarks in which he decried disparities between Wall Street’s wealth and the financial struggles of everyday Americans.

“It’s your job to make sure that efficient markets are balanced with strong enforcement that protects Americans from the worst Wall Street greed,” Brown added.

In his testimony, Gensler added to his long to-do list, telling lawmakers that he wants private funds to disclose more information about potential conflicts of interest and the fees they charge. He also wants to impose greater transparency on the country’s bond market, he added.

“It’s not the SEC’s role nor expertise … to address these political and social issues,” he said.