Want to ignite your child’s imagination? Help them start a band! - Metro US
Career

Want to ignite your child’s imagination? Help them start a band! We all love music. Sure. That is a blanket statement which is probably 99.99 percent true for any gathering of people that you might find yourself in. But does society still value musicians the way it used to in the past? In a recent study performed by Citigroup they found that the music industry pulled in $43 billion in 2017 alone. That proves that there is still money rolling in, but what is shocking is that only 12 percent of that money actually went to the musicians that created it. It’s a disparaging message to send to anyone who is first picking up their guitar or learning how to program a beat. But, should that dissuade anyone who is interested in creating their own music? It turns out, after school music programs can do wonders in igniting your children's creativity.

Why after school music programs could help your children in more ways than just rocking out. 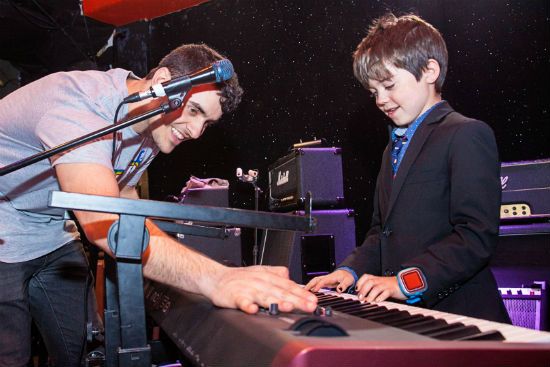 Teaching the values of learning a musical instrument can have the same positive effects on a student’s learning processes. According to a study conducted by the University of Kansas in 2007 they found that students in schools with high quality music programs scored “22 percent higher in English and 20 percent higher in math scores on standardized tests, compared to schools with low-quality music programs”. Aside from that, music programs can also have the same grounding and formative experiences as playing a team sport. That’s why the need for afterschool programs that inspire students to create their own music are so important for today’s youth.

One program that is taking the extra step is the Come Join the Band after school program that meets at Manhattan’s recording and rehearsal space Smash Studios. This program, was created as a partnership between musician Stephen Jacobs who has earned notoriety for his band The Dirty Sock Band that has appeared on Nick Jr. and PBS as well as his award-winning education program Kids Creative, and Smash Studio’s owner Clay Sheff in order to teach children ages 5-18 how to create music in a fully functional rock and roll band.

Its been a great first couple of days at Come Join the Band! regram: @s144man

Both Jacobs and Sheff work with their students’ bands on both writing their own music as well as learning covers in order to get them inspired to create more. Once the bands are in fighting shape, Jacobs and Sheff work to get them gigs at clubs all over the city as a way to show them how easy it can be to overcome stage fright and to present what they’ve been working so hard on.

“What we see happening,” explains Jacobs, “is that the kids confidence in themselves grows because they are so free to try things. Whether they fail or succeed, it’s actually the process of doing it that matters to them.”

So far, this process has producing tremendous results for these budding musicians as Jacobs and Sheff found that 100 percent of the students that were enrolled in this program last year were accepted in Laguardia High School of Music and Performing Arts and other top high schools such as Beacon, Talent Unlimited and Frank Sinatra. Many of Jacobs’ students over the years have also gone on to perfrom on Broadway and other artistic venues.. There is only room for growth with this program, as Sheff and Jacobs plan to expand it to help both children with special needs rock out as well as help adults who’ve always dreamed of picking up an instrument get onstage to live out those air-guitar moments in front of a mirror.

For Jacobs, igniting the passion for music within his students is one of the biggest gifts he could ask for. “I often have these conversations with kids where if they say to me ‘I’m bored’ and I’ll say ‘well, I haven’t been bored in 30 years!’ … One benefit of helping kids start a band is that they start realizing that they can do things… There is just so much to you can do!”